April 3, 2013 / electricityclub / Comments Off on DEPECHE MODE Soothe My Soul 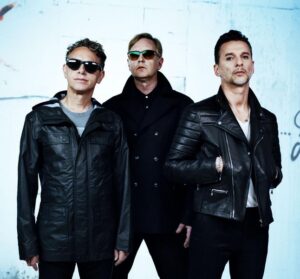 DEPECHE MODE have unveiled the video for ‘Soothe My Soul’, the second single to be taken from ‘Delta Machine’.

One of the standout tracks from the album, ‘Soothe My Soul’. The song bears the hallmarks of vintage DM, featuring a strong vocal performance from Messrs Gahan and Gore, set to a catchy blues riff not dissimilar to that of world conquering 1989 hit ‘Personal Jesus’. Indeed, the similarity between the tracks has already led to a spate of mash-ups appearing online.

Lyrically the song deals with one of Martin Gore’s favourite subjects; “there’s only one way to soothe my soul” he asserts, and the video should leave little doubt as to what he is referring to! Be warned if you are viewing at work, there is some risqué content featuring a naked model and a snake. Directed by Warren Fu, whose previous video credits include THE KILLERS and DAFT PUNK, it is an undeniably stylish affair, shot entirely in monochrome with a distinctive square frame.

Meanwhile, new album ‘Delta Machine’ has been generally welcomed by critics. Whilst all agree that it is an improvement on 2009’s lacklustre outing ‘Sounds Of The Universe’, some are hailing the album as a complete return to form for the trio.

Certainly this new single will delight fans who like their Mode dark, sexy and a little subversive. With ‘Soothe My Soul’, DEPECHE MODE might just have rediscovered their mojo!

‘Soothe My Soul’ is from the album ‘Delta Machine’ released by Columbia/Sony Records in an assortment of formats including CD, deluxe 2CD and double vinyl