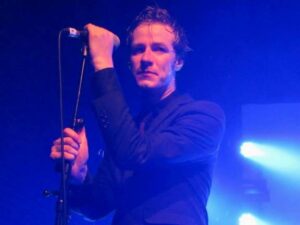 Technology and record company budget cuts have now meant that it is entirely feasible that an act with only one or two members can function perfectly well as a live act.

Whereas in the past, solo electronic-based musicians such as HOWARD JONES were the exception rather than rule, nowadays even rock acts such as duos ROYAL BLOOD and SLAVES are pairing down to the bare essentials, using the limitations of such line-ups to great effect.

When it comes to presenting electronica live, the stripped down approach is risky if there is little or no visual stimulus on stage, and a person nodding behind a laptop isn’t really going to engage for an hour.

Tonight’s event showed that a combination of sheer musical talent, well written songs, pristine vocals and a hypnotising stage presence can hold the attention of a 700 capacity audience without resorting to a support mechanism of lighting and backdrops.

With her performance tonight, HANNAH PEEL’s sound has further shapeshifted into something far more electronic than her earlier folky roots. Accompanied by two banks of synths and her familiar music box set-up, she cut a striking presence on the Village Underground stage. Opening with the title track and then ‘Silk Road’ from her ‘Fabricstate’ EP she alternated between organic piano textures and ribcage rattling bass, all the while sequencing and mixing her sound on stage without resorting to using a laptop. 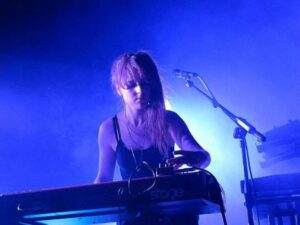 Peel’s vocals were faultless, the only downside being that during some of sparser moments of her set, the sound of bar chatter became all too apparent, as some of the Shoreditch hipster contingent stroked their ever-lengthening beards and (probably) contemplated the merits of not wearing socks with shoes…

Tonight she took the WILD BEASTS track ‘Palace’ and gave it the same stripped down approach, replacing the original PolyMoog-style textures with a fascinating instrument which is hand cranked and has each note punched onto strips of paper which can be joined together to create longer pieces.

The song reached its inevitable conclusion when the note-punched roll of paper finally fell to the floor. The final two tracks were new compositions, the first was a synth arpeggio-based number entitled ‘All That Matters’. Putting her Dave Smith Mopho synth to good use, it also employed more of a 4/4 approach than some of her previous work.

The concluding song ‘Forevrest’ had a glitchy feel to it with 6/8 elements and some FX sounds which were reminiscent of a broken Tardis, all the while with Peel swaying seductively from left to right between her banks of equipment.

It will certainly be intriguing to see how HANNAH PEEL’s next recorded material progresses and from what was showcased tonight, it should further her position as one of the UK’s best electronic artists.

EAST INDIA YOUTH AKA William Doyle has in a very short period of time established himself as a firm favourite and any concerns that a one man and his synth approach wouldn’t be able to hold an audience for an hour were soon dissipated, as he started attacking his Novation controller synth for the opening track ‘The Juddering’. 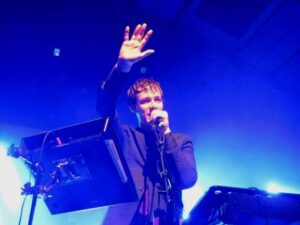 Sounds were panned and shifted back and forth across the Village Underground PA.

Throughout the evening, there were several controlled, almost MY BLOODY VALENTINE wall-of-sound moments with a mid-track sub bass moving some serious air.

With the exception of the intro, Doyle’s set was comprised of a pick of the vocal tracks from his two albums ‘Total Strife Forever’ and ‘Culture of Volume’.

One of the highlights of the latter, ‘Turn Away’ followed and gave an early outing for some live bass playing and a chance to explore the space at the back of the stage.

The combination of the electric bass and Doyle’s satorial suited and booted dress sense recalled a combination of a young Andy McCluskey (with admittedly better dance moves!) and one of the guys from MIRRORS, the use of the live instrument really helping to bring some of the tracks to life and adding even more visual appeal. 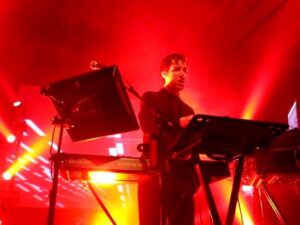 The gospel-influenced ‘Looking For Someone’ followed and Doyle’s single voice easily managed to carry the track, which on record has some serious multi-layering going on. The song climaxed in another bass workout and dissolved into a malstrom of FX and feedback.

During ‘Dripping Down’, a sweat-soaked Doyle was appropriately thrown a towel and then spent much of the rest of the set using it because of the sheer physicality used in performing the songs on show.

Centrepiece for the set was ‘Heaven, How Long’, a dynamic track which started with filtered arpeggios and then climaxed in an extended, motorik Krautrock inspired drum pattern. ‘Hearts That Never’ was stretched well over 12 minutes, probably the most dance-influenced track in EIY’s catalogue, it was the track that really got the capacity Village Underground audience moving.

To end the evening, Doyle stepped away from his banks of equipment to another mic set-up stage right and delivered a moving ‘Carousel’. Again vocally pitch-perfect, it was a fitting end to a captivating show. 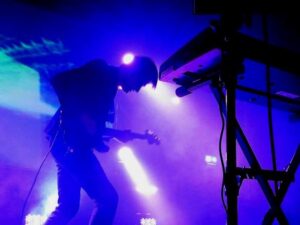 There was no encore because one wasn’t necessary, the only thing missing was a rendition of ‘End Result’ from ‘Culture of Volume’, but this was a minor quibble.

The Village Underground audience left having witnessed a performer who spent the evening completely caught up in his own musical creations, almost oblivious to the crowd held rapt in front of him. A stunning evening of electronic music, one which will live in the memory for a long time to come.

is released by XL Recordings as a CD, vinyl LP and download

is released by My Own Pleasure as a download via the usual digital outlets on 20th July 2015, the CD is available now from http://hannahpeel.tmstor.es/