December 17, 2014 / electricityclub / Comments Off on ERASURE Live In London 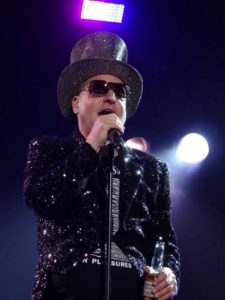 Andy Bell and Vince Clarke have been certainly riding on a reinvigorated artistic wave thanks to the warm reception accorded to ERASURE’s latest album ‘The Violet Flame’. Their best album since 2005’s ‘Nightbird’, their continued popularity has been reflected in the number of sold out shows on ‘The Violet Flame’ tour.

But perhaps the biggest surprise at The Forum in London tonight was how little of ‘The Violet Flame’ was actually played.

When the entire of ‘Light At The End Of The World’ was aired on the 2007 tour and nowhere near the quality of ‘The Violet Flame’, it all seemed a bit strange. But for the many ERASURE fans who had gathered for their heroes, this didn’t matter.

So effectively, this was a greatest hits show in all but name. Beginning with a danced up ‘Oh L’Amour’, the crowd were quickly bouncing around for the one of ERASURE’s early classics. As the pumped up 2014 reboot set the scene, its half sister ‘Star’ continued the template with a Miami styled backbone while ‘Breath Of Life’ ensured the dancing that had started would continue. There was then was the first of the evening’s surprises with the premiere live performance of ‘Make It Wonderful’. Andy Bell openly waved a lyric sheet and donned his reading glasses to complete the task; it was an indicator of why this charming man’s down-to-earth nature has connected so well with ERASURE’s legion of loyal followers over the years.

One of the original compositions from last year’s seasonal ‘Snow Globe’ album, it helped everyone to get into the festive spirit.

To fit in with the disco spirit of ‘The Violet Flame’album, Clarke reprogrammed ERASURE’s many hits into more dance friendly formats. But this approach was balanced with preserving the integrity and feel of the original songs. While none of the rearrangements were unlistenable EDM blow-outs or the sort of death-by-drop aberrations of Harris, Guetta and the like, the arrangements did bring a fun guessing game element to proceedings. 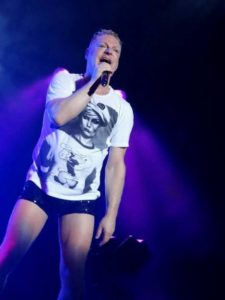 The most extreme of these was ‘You Surround Me’ which was speeded up into a disco-rock fusion like a GIORGIO MORODER production for ‘Top Gun’. The Moroder-inspired approach continued with ‘Stop!’ enhanced to make its elements of DONNA SUMMER’s ‘Love’s Unkind’ even more blindingly obvious.

Meanwhile, ‘Ship Of Fools’ got a Hip Hop styled drum machine treatment which led to Andy Bell twerking during the breakdown, proving that the hip replacement he received back in 2004 was still in good working order. The first of the three numbers from ‘The Violet Flame’ was the single ‘Elevation’, its rousing nature capturing ERASURE’s newly refound energetic zest. Even better though was ‘Dead Of Night’ with its extremely catchy “D-D-D-D…” hook.

As well as working around beats and grooves, part of the other reason for ERASURE’s artistic resurgence has been Vince Clarke’s move to composing on synths rather than his usual guitar, a technique which the Basildon boy recently admitted could make the songs sound “very folky”. This change of tact was showcased at its zenith with ‘Sacred’. But despite the cutting rave stabs and thundering rhythms, its topline did appear to bear a rather striking resemblance to GUNS ‘N’ ROSES’ ‘Sweet Child O’ Mine’!!! The thought of Axl Rose going techno is amusing, but then, both he and Andy Bell have a similar taste for skin tight cycling shorts! The stage was much bearer than on previous tours, so much of the visual accompaniment relied on a greater use of lights. As usual, Vince Clarke stood impassively behind his laptop and controller, venturing to acoustic guitar only when required and beating the odd rhythm on an electronic drum.

Meanwhile, providing vocal support were Emma Whittle and Valerie Chalmers; the two sisters first sang with ERASURE as far back as 1989 on the ‘Wild!’ tour. Experienced lungsmiths familiar with the ERASURE back catalogue and other variants of electronic pop, the pair were first spotted in Gary Numan’s backing band for his 1987 ‘Exhibition’ jaunt.

Their chemistry with Andy Bell was highly apparent as they smiled and soared while regularly exchanging positions on the two sides of the stage, proving to acts like THE HUMAN LEAGUE that this very simple aspect of live presentation can actually be accomplished without too much effort!

‘Blue Savannah’ still sounded as emotive as ever despite the influx of club oriented beats. But its classic chord structure had the crowd singing the refrain during the extended intro before Bell sang a note. In other diversions, the influence of Vince Clarke’s VCMG project with Martin Gore made its presence felt on the new interpretation of ‘Chorus’. But as expected, ‘A Little Respect’ drew the biggest cheers before ERASURE finished a close-to-perfect evening with a house flavoured rendition of ‘Chains Of Love’. For the encore, there was another surprise in a marvellous three-part acapella rendition of ‘Gaudete’ from the ‘Snow Globe’ collection. Originally made famous by STEELEYE SPAN, the traditional Latin carol held the audience’s attention before the inevitable ‘Sometimes’, ERASURE’s breakthrough hit from 1986 which still sounded fresh after 28 years.

“Thank you for coming out” said Bell cheekily before making his final exit to rapturous applause.

In ‘The Violet Flame’ tour programme foreword, Mute supremo Daniel Miller quotes Seymour Stein of Sire Records who said “the reason ERASURE are so great is because they make people feel good about themselves”. As everyone made their way home, the impromptu group sing-song of ‘A Little Respect’ on Platform 2 of Kentish Town Underground station was indeed proof of that.

is released by Mute Artists on a variety of formats including CD, deluxe 2CD, boxset and download