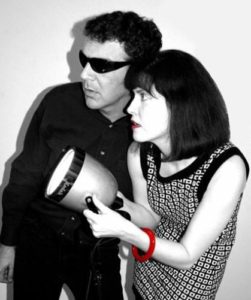 Bionic Bubblepunk duo HYPERBUBBLE made a rare visit to the UK recently when they were invited to play cult indie queen HELEN LOVE’s ‘Does Your Heart Go Boom?’ all dayer at The Lexington in London.

It was their first gig in the capital and in front of an audience more used to feisty indie pop, they won over the audience with their quirky electronic performance art.

HYPERBUBBLE arrived on stage with Jess attired in a black sequined blouse while Jeff was in full Texan state costume including matching ten gallon Stetson… those watching were convinced they were about to witness a mutant Country & Western duo.

But synthpop’s own CARTER & CASH launched into their calling card ‘Candy Apple Daydreams’ for a 45 minute performance of quirky electro. With the wacky manner of THE B-52s, HYPERBUBBLE soon had the crowd smiling and eventually bopping away to fun uptempo numbers such as ‘Synesthesia’, ‘Bionic Girl’, ‘Non Biodegradable Hazardous Waste Disposal’ and ‘Chop Shop Cop’.

With some finely tuned robotics, Jess even found time to play Theremin and venture over to Jeff to give him a good spanking during ‘Girl Boy Pop Toy’ as his larger than life personality charmed the crowd. And as a tribute to their host HELEN LOVE, HYPERBUBBLE also did an affectionate cover of her song ‘Better Set Your Phasers to Stun’ from 2000 which was appreciated by all present including ‘Never Mind The Buzzcocks’ team captain PHILL JUPITUS. 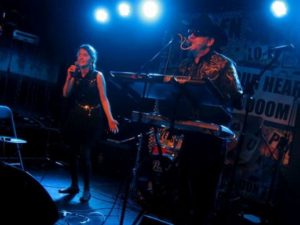 After their enjoyable set at ‘Does Your Heart Go Boom?’, HYPERBUBBLE kindly chatted about Synths, Justice and The American Way…

So how do you feel after your first gig in London?

I woke up this morning and had this visual of what it was going to be like and it was better than what I thought.

Jeff: The same… we have played other UK cities like Lancaster and Manchester but we were really excited when HELEN LOVE asked us to play London.

It was quite an eclectic line-up for this event so I had the impression some of the audience hadn’t heard a synthesizer played in a pop context for about 20 odd years! What did you think?

Jeff: Ours was the only music that had space between the notes! Instead of the strumming, there was suddenly all this airiness in the room! *laughs*

Jess: I actually think we fit more with HELEN LOVE’s aesthetic because there’s some punk in there and bubblegum pop… so we chose our set with her in mind.

Jeff: We were banking on the audience not knowing what to expect, we threw in a few things to throw them off… 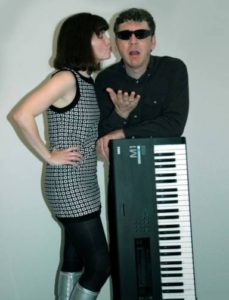 Jess: And, as Jeff likes to say, “guitars are retro…”

Jeff: Whenever anybody plays a synthesizer, the ‘80s’ comes up and the word ‘retro’ gets used. But we’re believers in what we’re doing is a continuance of something that may have stopped a little too prematurely and that hasn’t been explored as much or as often as it should be.

So there’s technology today which does things that couldn’t possibly have been done back in the 80s… I mean, aren’t those guitars and the style of music most often played with them retro? But with electronic music, there’s always been a sense of looking forward, of building upon something instead of looking back.

There were a lot of smiles in the audience during your performance?

Jess: We definitely play upon that because we see ourselves as part-performance art, kitsch cabaret pop…

Jeff: We were taking band photos and coming up with costumes as part of the art concept before we bothered doing the songs… HYPERBUBBLE is very much an art / music project.

So what would you say to observers who might say “it should only be about the music, it shouldn’t matter what a band looks like”?

Jess: I have to say, and not being too irreverent here, but I’m so tired of ‘sincerity’… people say music has to be sincere but art can be anything. And it can be humourous, it can be dark humour, it can be political commentary like our song ‘Non Biodegradable Hazardous Waste Disposal’… when you put limitations on what art or music can be, then you can miss a whole lot.

Jeff: I think the bands should be the ones making up their own rules and not having someone else making them.

In the US at the moment, EDM is popular… is that helping or hindering HYPERBUBBLE?

Jeff: EDM gives the potential audience something they can relate to and creates an open-mindedness. So our music has a point of reference now for people who didn’t understand it. Little do people know but they have been weaned on electronic music since the 60s with television commercials and movie soundtracks so there has finally been a breaking down of barriers that this wasn’t music. People are recognising that “yes, this is a valid art form now”! 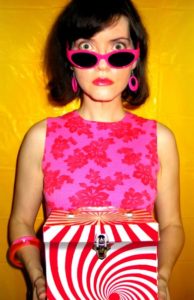 Jess: I have this memory when I got my first synthesizer, my sister who played French Horn said “you can’t make real sounds on that thing! You can’t make the sound of a saxophone or French Horn” but I told her “I’m not trying to, I’m making new sounds”… flash forward to 2014 and she’s HYPERBUBBLE’s biggest fan, you’ll find her all over Facebook liking everything we do.

Jeff: When we were in Glasgow a couple of tours ago, I was in an elevator and there was this guy in there with a mandolin case and I was holding my microKorg case. He said “what’s that?”. I replied “a synthesizer” and he said “when the electricity runs out, you’re f***ed!”. I was thinking, when the electricity runs out, the last thing I’m going to be worried about is where I can plug in my synth! *laughs*

You went to Moogfest 2014 which featured KRAFTWERK and GIORGIO MORODER?

Jess: I didn’t go, Jeff went with his brother who’s in the band NITE RISK…

Jeff: Oh, it was like a disciple going to The Sermon On The Mount, it really was. KRAFTWERK were a band I first heard when I was 13 with this otherworldly sound…I listened to ‘Autobahn’ daily! In my mind, they are this perfect combination of music and art concept. To see it played out… I was actually weeping during ‘The Robots’! But the most poignant moment though was when they had a technical issue and you saw human beings behind the keyboards having to deal with an error… they were so graceful about it. And instead of sending out some flunkey to tell the audience to hold tight, Ralf Hütter took responsibility and came out to apologise. I think we were lucky to see the human part of this band. I think we saw one of the best KRAFTWERK shows ever because we got a little peek behind that mystique that has been built up.

Likewise, attending a seminar with GIORGIO MORODER and watching him perform live laid to rest the mythology of him being a cold, robotic producer. He was warm, and actually quite funny. Also, like seeing KRAFTWERK, hearing Moroder speak about monumental singles like ‘I Feel Love’ and the soundtracks from ‘Midnight Express’ and ‘Cat People’ brought those early HYPERBUBBLE influences full circle.

Your main project this year has been the soundtrack for the film ‘Attack Of The Titans’, and you’ve won an award? 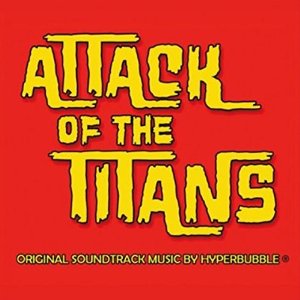 Jeff: Yeah, the award was for ‘Dee Dee Rocks The Galaxy’, a film that was made by the same crew as ‘Attack Of The Titans’. It won ‘Best Soundtrack’ at the 48 Hr Film Festival. It’s going to be coming out next year, because we’re trying to pace the releases a little.

With the soundtracks, we’re going back into what got us into this kind of music in the first place, listening to those TANGERINE DREAM soundtracks like ‘The Park is Mine’, ‘Sorcerer’, ‘Risky Business’ and ‘Thief’, which, by the way, worked great while riding the London Underground this trip.

We’d done ‘Drastic Cinematic’ which was a make-believe soundtrack, and it led us to being invited to do actual soundtracks. I just love being given a concept and a visual and asking myself “what are you going to do that suits this?” – ‘Dee Dee Rocks The Galaxy’ is the next step forward for us, because it’s a mini-synth rock opera which required us to work with singing actors.

Jess: Speaking of concepts, our costumes tonight are foreshadowing what’s to come… we plan to produce, mix and create the first electro Country & Western LP *laughs* 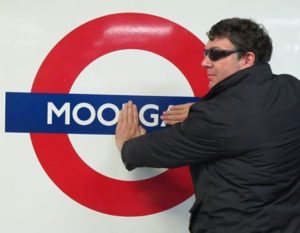 Jeff: Actually, ‘Switched On Nashville’ may have been the first! *laughs*

With our stage clothes, we’re playing up to people’s expectations, then throwing in a paradox… looking like their pre-conceived idea of what a Texan is and then sounding nothing like it! So now we’re going to flip it all the way over. Synthesizers with their pitch bend and portamento really lend themselves to that country twang! And the first three letters of “Moog” spell MOO! *laughs*

It’s been four years since the ‘Candy Apple Daydreams’ album and you’ve been doing these soundtracks and EPs. Has that been conscious? Do you think albums are an outdated concept?

Jess: My first thought is that we keep trying to do something new each time and not repeat it.

Jeff: Also, when we try to do something, we try to do the best version of that concept we can and we were really satisfied with ‘Candy Apple Daydreams’… it was like “let’s do an electronic pop rock opera with a theme and a storyline”. A lot of what we like about electronic music came from the ‘song’ bands that wrote pop tunes but much of it has also come from soundtrack and experimental music. Those first three albums were about establishing ourselves enough to have room to stretch out a little bit more. 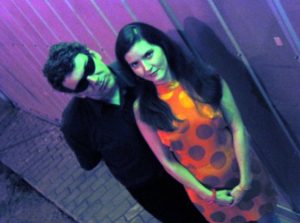 Although Texas has a great crop of electronic based acts such as FEATHERS, ELEVEN: ELEVEN and IRIS, do you ever feel that being there that you’re out of sorts in terms of location as far as electronic music is concerned?

Jeff: Well, Texas is the home of NASA and you can’t get much more technical or electronic than that *laughs*

Jess: I think San Antonio has come along way since its heavy metal days, there’s a lot more up and coming bands who are duos or have a minimal set-up. But of course, we’re close to Austin which is the state’s music capital so it’s a great place to be. And our biggest supporters have been the visual art community in Texas so we really cross over into that realm.

Jeff: San Antonio actually has a secret synthpop history. Shortly after THE SEX PISTOLS played at Randy’s Rodeo in our hometown of San Antonio in 1978, you had this explosion of bands that were inspired by that, but who also listened to FAD GADGET and THE NORMAL. As a result, in the early 80s, there were actually a lot of San Antonio synth-driven acts like DEM VACKRA, BA SYNDICATE, INNOCENT X, CHARLES ATHANAS, MANNEQUIN, LUNG OVERCOAT (of which I was a founding member) and GET REAL. We tip our ten gallon hats to them. Yee-haw! 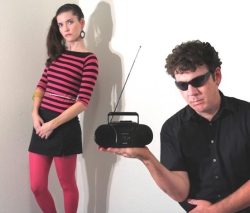 ‘Better Set Your Phasers To Stun – The Next Generation’, the ‘Attack Of The Titans’ soundtrack and HYPERBUBBLE’s four albums ‘Drastic Cinematic‘, ‘Candy Apple Daydreams’, Solid Pop’ and ‘Airbrushed Alibis’ are available on CD from http://www.hyperbubble.net/