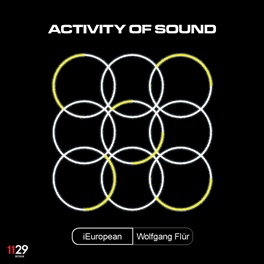 Entitled ‘Musik Soldat’, the former KRAFTWERK percussionist said the show was a presentation of music and storytelling that was like “The Brothers Grimm with synthesizers”.

But his latest musical venture has been a marvellous electronic number entitled ‘Activity Of Sound’, recorded in collaboration with iEUROPEAN.

The project of Dublin based artist Sean Barron who was formally a member of the band EMPIRE STATE HUMAN, the additional female monologue for ‘Activity Of Sound’ incidentally is provided by Barron’s wife, Izabella.

Wolfgang Flür was one of the first musicians to be widely seen playing a self-built electronic percussion set on German TV Station ZDF when he joined KRAFTWERK in 1973. After contributing to six albums from ‘Autobahn’ to ‘Electric Café’, he left in 1986. Herr Flür’s last full length album ‘Time Pie’ was issued in 1997 under the moniker of YAMO. His memoirs of his time at Kling Klang were collected together in his revealing autobiography ‘I Was A Robot’, published in 2000.

‘Activity Of Sound’ by iEUROPEAN featuring WOLFGANG FLÜR is released on Subculture Records as a download from http://subculturerecords.bandcamp.com/album/activity-of-sound