FEATHERS If All Now Here

June 9, 2013 / electricityclub / Comments Off on FEATHERS If All Now Here 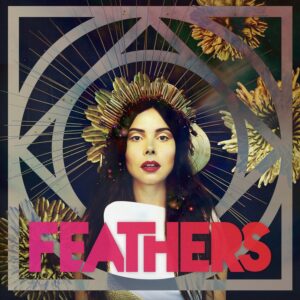 It had to happen but has the world found its female DEPECHE MODE?

American quartet FEATHERS are certainly in the running and in March, had the honour of supporting the Basildon boys at their SXWS gig in Austin, Texas. They have also recently supported LITTLE BOOTS in the US. Led by vocalist / songwriter / programmer Anastasia Dimou, FEATHERS became an electronic based project largely out of practicality after she left her previous band CRUEL BLACK DOVE. Bassist Courtney Voss, keyboardist Kathleen Carmichael, drummer Jordan Johns and alternate guitarists Alex Gehring and Destiny Montague joined to augment the live presentation.

Combining modernism, dystopia and deserts, titles such as ‘Dark Matter’ and ‘Night Seances’ provide the setting for a moody but accessible gothic allure that runs through the debut album ‘If All Now Here’. First single ‘Land Of The Innocent’ is a wondrous epic based around the arpeggio of ‘Ice Machine’ and is like LADYTRON’s ‘Black Cat’, driven by a hard incessant beat complimented by deep synth squelches.

Possessing an industrial gloom with an enlightening pop sensibility, it’s rather like MARSHEAUX borrowing from ‘Playing The Angel’ rather than ‘Violator’. And as Dimou is of Greek ancestry, the description is not wholly inappropriate. It’s the sound of a post-apocalyptic BANGLES going down to Berlin rather than ‘Going Down To Liverpool’!

The brilliant second single ‘Soft’ recalls the single version of ‘Behind The Wheel’ with its tightly sequenced synth bass and staccato vocal samples. Dimou’s dreamy middle eastern overtones nicely layer in the second half for that euphoric lift. Meanwhile ‘Some Great Reward’ era metallic samples permeate through ‘Dark Matter’, a tune with a Latino dancefloor heart but reimagined by NITZER EBB!

The electro disco of ‘Familiar So Strange’ is appropriately FEATHERS’ ‘Enjoy The Silence’ but of course, no DEPECHE MODE influenced act would be without a rousing 6/8 Schaffel stomper. A pair of those come with ‘Fire In The Night’ and ‘Believe’, the latter adding some raunchy blues slide guitar too. These rockier ditties showcase the album’s more organic middle section from which ‘Dream Song’ points to a conventional, rootsy side reminiscent of HOPE SANDOVAL.

But the shimmering synths and percussive programming return on ‘Leaves Start Trembling’ with cool atmospheres recalling Billie Ray Martin’s new project THE OPIATES and their ‘Anatomy Of A Plastic Girl’. One of the album’s highlights, while it shares its eerie sparseness, it does so with a more Trans-Atlantic stance. The drama of ‘Welcome Possession’closes a great debut album with some vibey filmic impressionism punctuated by icy pulsing sequences and octave shifts. 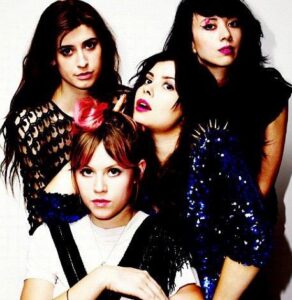 Despite first impressions, ‘If All Now Here’ is not entirely DM sounding and FEATHERS do possess an aural template that also references CURVE and NINE INCH NAILS while displaying a kinship with acts like AUSTRA and GHOST CAPSULES.

While DEPECHE MODE may be the first port of call on ‘If All Now Here’, from the moment Anastasia Dimou reveals her dulcet tones, FEATHERS become something else.

They may be Sisters Of Night, but FEATHERS have their own, very promising and enjoyable identity.

‘If All Now Here’

Posted in Reviews Tagged with FeathersLadytron