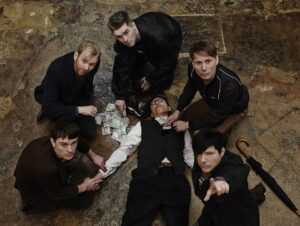 Entitlement is a funny character trait…

Some persist on their inflated self-assessment and demand recognition, despite their actual league standing.

And these characters are the subject of ‘Johnny Delusional’, the lead single from the self-titled album by FFS, a new project comprising of Glasgow based art school quartet FRANZ FERDINAND and everyone’s favourite quirky pop siblings SPARKS.

While ‘Johnny Delusional’ starts like the intro of FRANZ FERDINAND’s ‘Walk Away’, it then launches into a stomping indie rocker with Russell Mael’s trademark falsetto and Ron Mael’s piano interplay augmented by stabs of octave bass synth. With the lyrical couplet of “I want you, I know I haven’t a chance”, ‘Johnny Delusional’ could be about a girl, fame or acknowledgement…

As a possible reply to ‘Johnny Delusional’, the ‘FFS’ album closer ‘P*ss Off’ has also been publically aired. With the vibrancy of ‘Kimono My House’ and ‘Propaganda’ era SPARKS, it is riddled with jaunty ivories and camp vocal theatrics in the vein of classics such as ‘Something For The Girl With Everything’ and ‘BC’.

Each combo’s own eccentric pop sensibilities have been successfully merged and mutated, with no one act dominating the other. “I think each band unconsciously relinquished a little of who they were in order to enter new territory” said Ron Mael.

“Most collaborations stink!” said FRANZ FERDINAND’s Alex Kapranos and observers would have every reason to be cynical following SPARKS’ less than successful adventures with FAITH NO MORE, ERASURE and JIMMY SOMMERVILLE on the 1997 project ‘Plagiarism’.

But FFS is different… whereas ‘Plagiarism’ was a well-intentioned, if ultimately flawed, revisiting of the Mael brothers’ past glories, the union between SPARKS and FRANZ FERDINAND is centred around working as a six piece band on fresh new material. 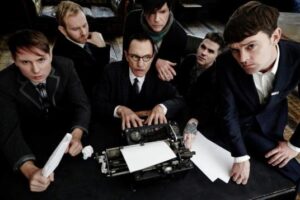 And this is reflected on ‘Collaborations Don’t Work’, a seven minute journey that takes in acoustic balladry, synthesized orchestrations, layered operatics and classical piano!

Like the sorcerer working with the apprentice to double the magical power, over a period of just over two weeks in late 2014, ‘FFS’ was recorded “all together, in a room” according to Kapranos, “So no hanging around or fannying about”. Based on the evidence of the three songs premiered in full so far, FFS are presenting some fine idiosyncratic but accessible pop.

is released by Domino Records on 8th June 2015