GARY DALY Don’t Give Up, Dummkopf! 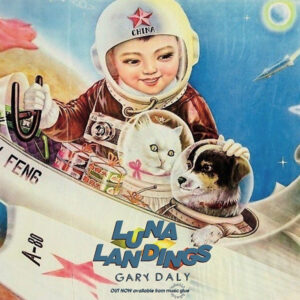 With its striking Valentina Tereshkova adorned artwork, ‘Luna Landings’, the second solo album by CHINA CRISIS’ Gary Daly was an affectionate memory of yesterday’s tomorrow and a must for synth instrumental enthusiasts.

Many of the tracks on ‘Luna Landings’ began as demos and sketches back in the day, with the view of being turned into CHINA CRISIS songs or used as B-sides in the manner of ‘Dockland’, ‘Forever I & I’ and ‘Watching Over Burning Fields’. Despite the age of the recordings, the air and hiss from the incumbent machinery added an endearingly earthy quality to proceedings.

With its dominant percussive snap within the windswept lo-fi ambience, the track ‘Dummkopf’ has been segued into the spacey moods of ‘And When Did You Give Up… And Why?’ to be given an absorbing colourful video treatment by Scott Spencer and John Brown.

Presented as ‘Don’t Give Up Dummkopf’, Spencer and Brown had worked together on the video ‘Ill Fit’ for the Liverpudlian art pop band WAVE MACHINES; incidentally, the former once made a bootleg CHINA CRISIS T-shirt for a home economics project at school and first met Gary Daly in 2008.

The story behind the video goes: “’Don’t Give Up, Dummkopf!’ was made as the coronavirus is shaking up the globe, throwing up everyone and everything with it. Those who can suit up to protect themselves. In the turbulence our trajectory is knocked off course, warnings are ignored, setting off a chain of system failures. Now adrift in the sea of time and space, we scramble about to chart a new course.”

It continues: “A race began to discover a vaccine. Away from the multibillion-dollar corporations, in a flat in Liverpool, scientists were reappraising Douglas Trumbull’s groundbreaking ‘star gate’ work on Californian phenotype mutations. The scientists derived new nonlinear techniques from Trumbull’s original work. In the lab they applied the new strains to sounds made by Gary Daly, producing positive results. Trials saw affect display score high. We are now able to share our results with you.”

‘Dummkopf’ and ‘And When Did You Give Up… And Why?’ feature on the album ‘Luna Landings’, available as a CD direct from https://www.musicglue.com/gary-daly/products/luna-landings-cd

KID KASIO: Interview From The Tollyoliver