November 17, 2013 / electricityclub / Comments Off on GARY NUMAN Splinter Live At The Roundhouse 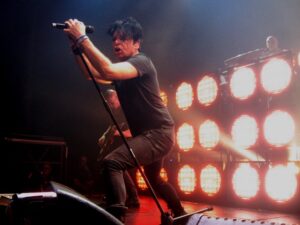 On a crest of an artistic wave right now is GARY NUMAN.

In a career which has seen more highs and lows than many people can care to remember, his new album ‘Splinter (Songs From A Broken Mind)’ has seen him put together his most significant body of work since 2000’s ‘Pure’.

But it has been a difficult realisation with recording having started on ‘Splinter’ 7 years ago.

Battling with relationship problems, depression and a mid-life crisis, eventually he pulled through. Gary Numan said “we’ve come out of it stronger than ever… I found because of all the sh*t we’d gone through, I had a huge amount of things to write about”. The resultant journey has led to songs which possibly could stand up as being among some of the best of his career. Numan readily admitted though: “they’re not the happiest of tunes to be really honest, but it all came from a very difficult time! Food for creativity!” 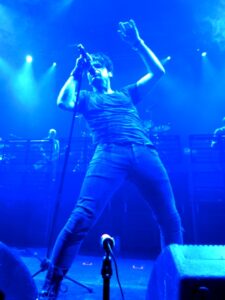 Whether it’s a new found relaxed state of mind from being confident in his musical abilities again or moving to the sunnier climes of Los Angeles, GARY NUMAN is on mighty form at The Roundhouse in London. Intense yet relaxed, there’s a focus in the performance, the material and the presentation of the ‘Splinter’ show.

The film projections have gone, replaced by a huge LED lightshow that enhances the more electronic but heavy aura of ‘Splinter’, relying more on surreal standpoints to stir the imagination rather than literal illustrations. Gone too is the sluggish material from the one dimensional ‘Jagged’ album of 2006 which often ground Numan’s live sets over recent years to a halt.

The opening salvo of ‘I Am Dust’ is a magnificent statement of intent for the evening. The sound is crisp, powerful and dynamic. Following on with the evergreen ‘Metal’, this highlight from 1979’s ‘The Pleasure Principle’ sounds like it could have been written last year. Its toughened stance even sees Numan venture behind an Alesis Quadrasynth and replicate the NINE INCH NAILS arrangement of the song with its extended ‘M.E.’ based climax. 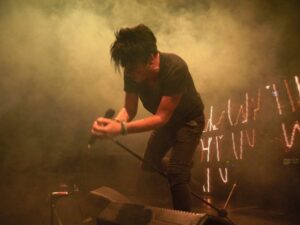 More material from ‘The Pleasure Principle’ comes in the shape of ‘Films’.

But on ‘Splinter’ songs such as ‘Everything Comes Down To This’ and ‘Here In The Black’, the reinvigorated Numan is headbanging vigorously and snarling like it is the last gig of life!

Meanwhile, ‘The Fall’ returns in its ‘Dead Son Rising’ form thankfully after the ill-advised sojourns into remix variants while the industrialised attack of ‘Pure’ rouses the crowd.

But it’s the newer material from ‘Splinter’ that is of a less obvious rockist nature which really impresses. The title track’s Arabian demeanour breathes with space, beauty and melody while the orchestration on ‘The Calling’ takes Numan’s music into wonderfully expansive cinematic territory.

Interestingly, ‘Down In The Park’ sits within this part of the set and while Numan is not recreating the eras of ‘Replicas’ and ‘The Pleasure Principle’, the fact that material from this 1979 era blends so seamlessly with ‘Splinter’ and its songs from a broken mind indicates why this 2013 album has gained so many plaudits. 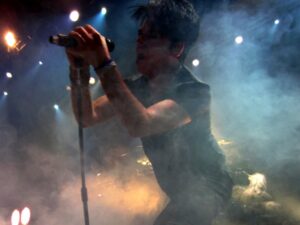 The show continues bravely into ‘Lost’, a stark number that sees Numan bear his soul. Stripped to just piano and voice in its first couple of verses, it is moving to the nth degree with its humanity and vulnerability.

Numan is quite visibility choked in a manner than hasn’t been seen he performed ‘Please Push No More’ on the ‘Micromusic’ DVD of his 1981 farewell Wembley concert. But then Numan almost steals defeat from the jaws of victory with ‘We’re The Unforgiven’.

It creates an unnecessary lull to the show when it might have been more prudent to blast ‘Who Are You?’ into action; it is the key track from ‘Splinter’ that is missing tonight. But it’s only one lull and three quarters into the set… not bad when your consider how some Numan shows over the last few years have had four or five!

It all gets back on track however with the blistering anthemic rocker ‘Love Hurt Bleed’ and the brilliance of the 1980 single ‘I Die: You Die’. Closing the main set with the heartfelt, blippy cacophony of ‘A Prayer For The Unborn’ which is only spoilt by the first distortion of the evening, this performance is a triumph for GARY NUMAN. 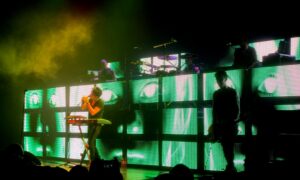 For the encore, Numan inevitably dusts off the two UK No1s which turned him into the first synth superstar back in 1979.

Not surprisingly it has to be said, ‘Cars’ sounds really out of place, even in slightly goth-ed up form. ‘Are Friends Electric?’ however never ages and has the audience chanting along like a religious ritual.

But for the conclusion, it is the brooding but beautifully dramatic ‘My Last Day’ that closes, a fine soundtrack to see in the apocalypse if ever there was one, with the vox humana synths providing a most chilling musical spectre.

Free from the ballast of ‘Jagged’ and incorporating the best elements of ‘Replicas’, ‘The Pleasure Principle’, ‘Telekon’, ‘Pure’ and ‘Dead Son Rising’, the ‘Splinter’ show was Numan back to his best. The dynamic and tempo variation plus the return of more electronics all appear to have done the trick… everything comes down to this! 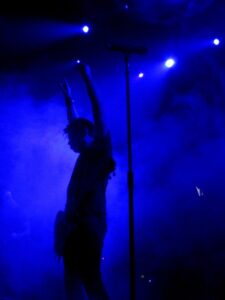 ‘Splinter (Songs From A Broken Mind)’