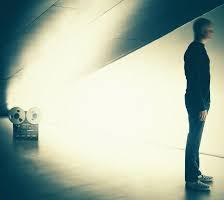 POLYDROID is the solo project of Brian O’Malley living and recording in his native home of Dublin, Ireland.

His eight track debut album ‘Machines of Pure and Loving Grace’ is a collection of bold and sweeping electronic instrumental tracks.

Every track could easily be used on a blockbuster film score and indeed, multi-media talented O’Malley’s full time career has been as a leading director of TV commercials and short films. However, he has now written and directed his first full length movie ‘Let Us Prey’ which is due to be released sometime in 2014.

First two tracks ‘Rectification’ and ‘Not Too Neat’ include an informative technical voice over, ideal for the less initiated listener but is counter balanced by the album instrument list of synthesizers used on the production for the album. A consummate synth lover’s wish list including several Moogs, Roland Jupiters and the much loved Sequential Circuits Pro-One.

All these fit perfectly the POLYDROID album theme of “man losing his humanity to the machine”. VANGELIS and KRAFTWERK admirers will not be left wanting and POLYDROID cites his influences as early German electronica and science fiction cinema amongst others. Fans of JOHN FOXX and early HUMAN LEAGUE may also find these synthetic moods appealing. The track ‘Ode To An Android’ is far from soul less as the title may conjure and the other album tracks all have the same excellent production.

Single track ‘Only A Cell‘ is rich, melodic and haunting. An enviable comparison to the works of the great John Carpenter. The video is a drama packed edited version of Brian’s short film ‘Screwback’ which was originally filmed in 2005. It stars the charismatic Irish actor Liam Cunningham, who amongst other parts has had a character role in the highly credible and acclaimed ‘Game of Thrones’…

Among his other activities, O’Malley is also part of an electronic duo with EMPIRE STATE HUMAN frontman Aidan Casserly called KUBO who supported BLANCMANGE in Dublin in November 2013.

‘Machines of Pure and Loving Grace’ is available as a CD or download from:
http://coldbeatsrecords.bandcamp.com/album/machines-of-pure-and-loving-grace

Posted in Introducing Tagged with PolyDROID

A Beginner’s Guide To STEPHEN HAGUE