June 19, 2012 / electricityclub / Comments Off on COMPUTE The Distance 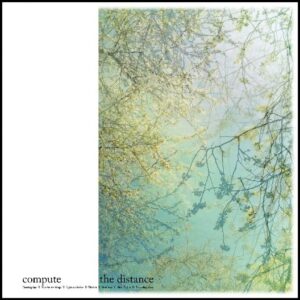 “COMPUTE is a synthpop-project with some dirt in it, an attempt to combine past, present and future in one single song, and a sparkling merge of melancholy and naive pop melodies. COMPUTE believes that every song should be a hit for someone, somewhere.”

These are COMPUTE’s own words to describe her music. Behind the moniker COMPUTE is Ulrika Mild, who hails from Gothenburg, Sweden.

In her early teens, she was introduced to DEPECHE MODE’s classic record ‘Speak and Spell’ by her older brother and instantly felt like she had found her musical home.

She soon started to play in different bands. In the beginning of the new millennia, Ulrika got her first software synths and started to create her own music at home, which was like a revelation to her. In the beginning she used the synths like any other instrument and tried to build a rather traditional pop sound. Later, she abandoned this to a certain extent and instead, dared to take full advantage of all the possibilities the synths gave her.

COMPUTE’s music can be described as really irresistible synthpop songs, full of brilliant multi-layered soundscapes, accompanied by strong beats, incredibly catchy melodies and vocals that are both fragile and powerful at the same time. The lyrics are also very personal, clever and original. Just like MARSHEAUX, she can do both cute little pop tunes, melancholic ballads and songs with harder danceable beats with the same ease.

Her music is very uncompromising and direct, far from being shy. It’s really liberating to hear music with this level of authenticity; music that doesn’t try to be trendy in any way. COMPUTE sticks to her own formula and by doing so delivers high quality synth pop tunes like they are the most natural things in the world. 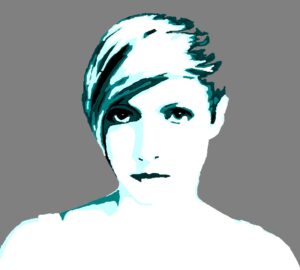 After selling out some EPs between 2004 and 2006, she released her debut album ‘This’ in 2009. In 2010, she recorded a very well received cover of ‘Förlåt’ on the tribute record to Sweden’s first synthpop band PAGE (curated by this writer).

In fact, PAGE’s Marina Schiptjenko named COMPUTE’s cover her personal favourite on the entire ‘Tiden Går – En Hyllning Till Page’ double album. In 2011, COMPUTE collaborated with Deadbeat from THE GIRL & THE ROBOT but she has now released her follow up album; ‘The Distance’.

The overall production has been sharpened up a notch or two, the sounds are crisper with more power and the vocals as angelic as ever. This time there are a little more indie pop influences here and there, especially in the last song ‘The Ending Of You’ – maybe because Ulrika also is a part of the indie pop band LICHTENSTEIN? Sometimes the music is extremely minimal and simplified, but thanks the Ulrika’s brilliant voice and sense of creating melodies and beats, it all works and does so very well.

Sure, you can trace some inspiration from early DEPECHE MODE, Minimal Wave and groups such as PAGE, YAZOO and others: the refrain of the song ‘Light As A Feather’ is a reminder of DAVID BOWIE’s ‘Ashes To Ashes’, the beat in the song ‘This Is It’ features obvious similarities to that of THE KNIFE’s ‘Like a Pen’, and there is something in the song ‘Shot’ that feels like NEW ORDER’s ‘Touched by the Hand of God’. But it has to be said: COMPUTE is never a clone. On the contrary, she is quite unique. 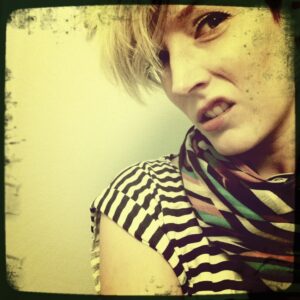 The highlight on the new album is ‘Dawning Days’, which combines classic EBM beats (think early FRONT 242) with a synthpop melody and Ulrika singing sweet harmonies with herself. All in all, this album is another brilliant piece of COMPUTE-music, albeit a bit short with only eight three minute songs – but maybe this is another KRAFTWERK influence?

It’s more fun with COMPUTE. When playing live, COMPUTE is often augmented by her friend Renee Gustafsson on additional keyboards and backing vocals. Her gigs are real treats and just like with EMMON or MARSHEAUX, it is impossible not to start dancing.

‘The Distance’ is released by DSTG Recordings

Posted in Reviews Tagged with ComputeEmmonPage