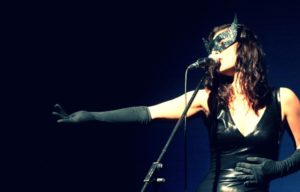 Electro Weimar Cabaret is the easiest way to describe the music of KATJA VON KASSEL.

She sings in both German and English, often within the same song in a sultry Marlene Dietrich tone.

After working within the UK music scene for several years including a stint as a guitarist on ‘X-Factor’, she was going to head back to Germany.

But luckily met producer and LADYHAWKE collaborator Alex Gray who co-wrote ‘My Delirium’ and ‘Dusk ‘Til Dawn’. He introduced her to the joys of electronic instrumentation and now with her synthetic torch songs, she appears to be in the right place, at the right time with the right music. Songs like ‘Goodbye Was Never Said’, ‘Riding The Horses’ and ‘Lili Marlene’ are electronic dance numbers with a cool, elegant charm. Alex Gray’s intricate production can be fully appreciated alongside Katja’s magnificent vocal presence. The arrangements are busy but uncluttered, giving plenty of space for Katja to hypnotise with her drama.

Add to that, the Wagnerian quality of Katja’s Götterdämmerung delivery when she’s lets rip with her emotions and you have a very unique style of modern electro that possesses a classic quality, electro revival or not! Katja’s moodier numbers ‘Raindrops’ and ‘Der Himmel Brennt’ not only recall ‘Deer Stop’ or ‘Horse Tears’ from GOLDFRAPP’s marvellous cinematic debut ‘Felt Mountain’, but also the influence of Berthold Brecht.

Her tremendous song ‘Lies’ features strong traditional European influences like French accordions and ‘Vienna’ piano but also has hints of being a dancier version of GRACE JONES ‘I’ve Seen That Face Before’. Not entirely surprising as both songs are routed in the same dance… the tango. The stylish promo which accompanies it echoes her own words… it’s “1930s meets the future”. Welcome to the world of KATJA VON KASSEL.