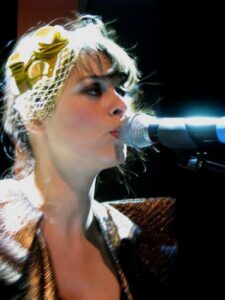 Although firmly established as a star in France since 2004 with her self-titled debut and its follow up ‘Vegetal’, ‘The Big Machine’ is the Brooklyn-based Mademoiselle’s first album primarily sung in English. Writing, playing, programming and producing all her own work, EMILIE SIMON is an embodiment of the truly independent female artist such as a KATE BUSH or a BJORK. As in the PET SHOP BOYS song ‘Opportunities’, she studied at the Sorbonne and was later a student at the IRCAM (L’Institut de Recherche et Coordination Acoustique / Musique) which is a leader in its research into sound and electronic music.

Her intricate synthetic textures and KATE BUSH influenced dynamic have transcended cultural barriers and appealed to a worldwide audience fascinated by her Gallic charm and inventive intelligent songwriting.

As the lights went down, she arrived on stage to a rapturous welcome completely solo and wearing a glamourous gold shoulder pad outfit. Wonderfully kooky, she slightly lost her footing as she stepped towards her ‘Big Machine’ but then kicked off her heels and opened with a bleepy sound collage before launching into ‘The Devil At My Door’. As well as her keyboard, laptop and a variety of synths, Emilie is accompanied by her faithful Yamaha Tenorion and an amazing effects gauntlet on her arm to provide all manner of echoes, phasing and distortion. 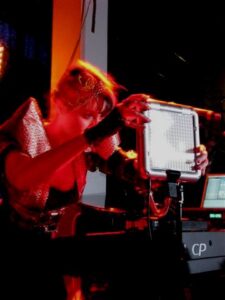 As she quickly went into the brilliant ‘Dreamland’, the heavy bass synths resonated around the venue while tinkling melodies complemented the avant electro. The chilling pentatonics of ‘Chinatown’ wonderfully run free while the satisfyingly incongruous Gregorian / Balearic hybrid of ‘The Way I See You’ actually gets some of the crowd singing along. Suitably impressed, Emilie glanced over to the protagonists and remarked “next time, you come up here and sing it with me”

One of the things that stand out this evening about EMILIE SIMON apart from her mastery of all the incumbent electronics is her voice. Whether she’s whispering or raging, her voice maintains a frisky feline quality.

It’s not for everyone, but it’s dynamic and expressive. For her, the voice is another instrument and in that respect, it almost goes unnoticed whether she’s actually singing in French or English, such is the beauty of the tracks on offer.

A stripped down interlude with the gorgeous ‘Flowers’ from her first album takes things down for a moment before Emilie swaps her acoustic guitar for a Casio guitar synth to play a fully mechanised beat cover of THE STOOGES’ ‘I Wanna Be Your Dog’. The brilliantly feisty result sounds like KRAFTWERK being eaten by BJORK and gets one of the biggest cheers of the night.

The climax to the show focuses on several key tracks from the new album including ‘The Cycle’ and ‘Rainbow’ before closing with electro-jazz tap of ‘Rocket To The Moon’. Here, Emilie grins and sexily finger clicks as she delivers one of the highlights from ‘The Big Machine’ to get the crowd going all Balboa! 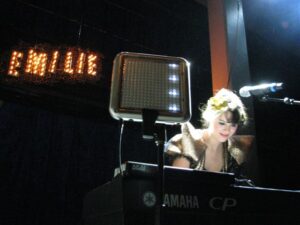 Returning for a well deserved encore, she rewarded all the appreciation with another acoustic guitar number in ‘Fleur De Saison’ before taking to the Jazz Café’s grand piano for ‘Desert’ and ‘Nothing To Do With You’. On the latter, EMILIE SIMON’s love of KATE BUSH fully lets rip with a few eccentric wails and some dramatic ivory runs!

The show is a brilliantly impressive performance from one of the most talented musicians on the scene at the moment.

Proficient on keyboards and guitar, a lover of modern technology and very strong in the vocal department, this little lady deserves to be heard. To use an old fashioned term, her music is a grower.

EMILIE SIMON will appeal to those who loved the original ‘concept’ of LITTLE BOOTS but may have been disappointed by the final product. C’est magnifique!