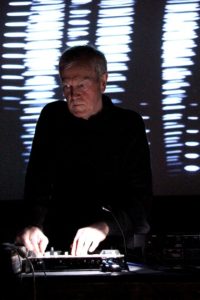 for The British Film Institute as part of their ‘Sci-Fi: Days Of Fear & Wonder’ season at London’s South Bank.

Described as “a unique investigation of the terrors and pleasures of temporal displacement. A sinister sonic architecture of drum-machine-music and analogue synthesizers”, the stoic ‘Film One’

from the B-side of ‘Underpass’

is perhaps a good reference point to those more familiar with JOHN FOXX’s song based work. However, even that number sounds like a pop tune compared with much of the material that makes up ‘Evidence Of Time Travel’

, this live presentation put the work into context with KARBORN’s cut-up images and specially filmed sequences providing an appropriate backdrop for a drum machine dominated soundtrack.

A well attended event, the audience appeared to fall into two distinct categories; the minority were youngsters who appeared to be film school students while judging by the sea of bald heads and grey hair, the majority were JOHN FOXX enthusiasts, unsure if this was a gig or a movie. 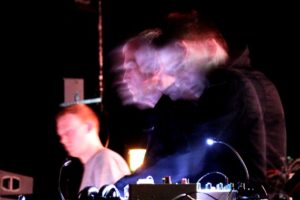 Whatever, a number couldn’t resist attempting to clap whenever the things went a bit silent as part of the show.

In some ways, this was very much a gig with Foxx positioned at the front doing octave shifts and attacking sweeps on his Roland workstation while D’Agostino handled an Organ Energizer semi-modular synthesizer, effects and electronic percussion. The addition of dialogue samples provided a distinct variation from the recorded version of ‘Evidence Of Time Travel’.

Meanwhile the wonderfully reverbed snakey Compurhythm CR-78 which provided the backbeat for the album was exploited to full surround effect in the theatre and still sounded very Sci-Fi despite a vintage of over 35 years.

had its haunting overtones enhanced further by a monochromatic screen test of a raven haired beauty broadcast in flickering UHF. The closing ‘Empty Clothing Blows Across a Beach’

provided a fittingly minimal but disturbing ambience, but its lengthy build and conclusion again confused those desperate to show a more conventional mode of appreciation after the 44 minute set. 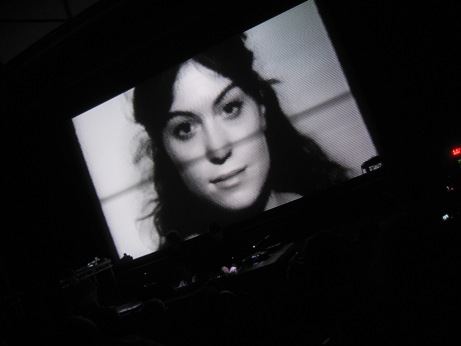 A presentation such as this is tricky to pull off in a traditional pop art manner, certainly with the absence of vocals and lighting focussed on the performers.

But ‘Evidence Of Time Travel’ successfully made sense with its accompanying visuals.

Anyone familiar with the films used during previous JOHN FOXX live shows would have appreciated the tastefully collaged images of men in suits, Renaissance sculptures and distorted lines to go with the stark music.

is available on CD and vinyl via Metamatic Records