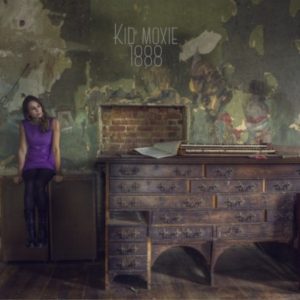 Since her first releases ‘Human Stereo’ in 2007 and ‘Selector’ in 2009, KID MOXIE has developed her self-confessed “gutter pop” into something altogether more sophisticated and cinematic.

The musical moniker of Elena Charbila, KID MOXIE has progressed on a transient journey through her guest spots with fellow Greeks NIKONN and FOTONOVELA to her most striking work yet with her second full length album ‘1888’.

Preceded in 2013 by her best song to date ‘The Bailor’, one person listening was film director David Lynch.

He commissioned a remix of ‘The Bailor’ in aid of his charitable Foundation, helping underprivileged populations across the world by raising awareness towards using Transcendental Meditation to heal traumatic stress.

is best approached. The album has two distinct modes, one being widescreen synthpop for want of a better description while the other is more naturalistic sonic sandwich heavily influenced by classic and arthouse film soundtracks.

‘1888’ begins with the pulsating ‘Lacuna’ and sees some of Elena Charbila’s je nais se quoi being applied to a dreamy electro-continental soundscape with an almost understated sexiness. Unafraid to experiment with arrangements, Gregorian chants are even thrown in while as the synths fade, the song isolates to just tinkling ivories and vibes.

Then second, in a similar manner to American TV shows, comes the ‘1888’ title track, an abstract cacophony featuring backward vocals, layered sitar and echoing accordion all smothered together for a surreal theme tune. But it returns to comparative convention on ‘Jacqueline The Ripper’, possibly the most overtly synthpop number in the ‘1888’ collection. Slightly reminiscent of THE HUMAN LEAGUE, it sees KID MOXIE take on a girly snarl alongside her breathy cooing while the closing breakdown gives a chance for her to indulge in a solo on her beloved bass guitar.

The wonderful wash of ‘The Bailor’ continues the rich glaze of the album but then appears a beautiful collaboration with renowned film composer Angelo Badalamenti via a new version of ‘Mysteries Of Love’. With lyrics by David Lynch, the song was originally recorded with JULEE CRUISE and featured in the film ‘Blue Velvet’. This dreamy cover bridges the two approaches on ‘1888’ and suits Charbila’s wispy vocal style down to the ground as it chills alongside the melancholic orchestrations.

With further wispiness, ‘Ghost Town’ could be a Françoise Hardy song for the 21st Century mashed-up with a Spaghetti Western soundtrack as synths and a muted six string provide the bed for some haunting whistling a la GOLDFRAPP’s ‘Felt Mountain’. 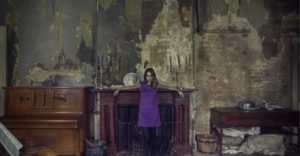 Of course, the king of such soundtracks is Ennio Morricone and with the spectre of Da Maestro looming in a collaboration with THE GASLAMP KILLER, a sombre string and horn combo dominates proceedings on ‘Museum Motel’ while military drums propel the aural drama up to a climax. ‘1888’ then goes all electro again with the pretty ‘Shadow Heart’.

Recalling DUBSTAR with guitars, bass, synths and piano all combining with Charbila’s breathy continental vocals, it is a heavenly slice of exquisite pop.

To finish, ‘Blackberry Fields’ sees Our Kid duetting with a scratchy field recording… the song is a real oddity, but fascinating.

KID MOXIE has undoubtedly grown up and the nine tracks on ‘1888’ show an inventive maturity on both electronic and organic sides of the musical coin. This promise has been a few years coming and the girl who first appeared in 2007 has blossomed. Those who may have been disappointed with ‘Human Stereo’ or ‘Selector’ will be pleasantly surprised by the leap forward on ‘1888’.

is released as a deluxe 2CD set with additional remixes by Amour Records, available from https://kidmoxie.bandcamp.com/album/1888