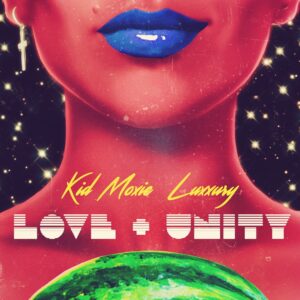 When Los Angeles and Athens are your home bases, you cannot help but have a sunnier disposition.

Following her moodier instrumental introspections for the soundtrack of the film ‘Not To Be Unpleasant, But We Need To Have A Serious Talk’ which also featured her great minimal cover of ALPHAVILLE’s ‘Big In Japan’, KID MOXIE ventures to the dancefloor for her new EP ‘Love & Unity’.

In collaboration with LUXXURY, the production moniker of LA based self-confessed disco fiend Blake Robin, Elena Charbila gets to showcase her dancier side as KID MOXIE.

It’s party like it’s 1999 as LUXXURY’s funked-up basslines and thumping beats combine with KID MOXIE’s indigenous Mediterranean moods on the title track and the modern day Sylvester meets THE BEE GEES groove of ‘Can You Feel It’ (not a cover of THE JACKSONS).

Meanwhile ‘All I Want’ cannot help but conjure up images of Ibiza sunsets as it recalls MOLOKO despite just the repeated title acting as the main vocal hook. But it’s not all full-on Nu-disco as ‘Paradise’ displays a much more dreamy restraint with a less frantic tempo and is all the better for it. 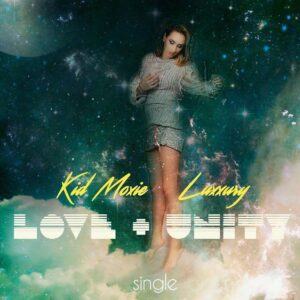 But ‘Saturn Returns To Disco’ is more filmic and possesses the exquisite continental allure that people love KID MOXIE for, especially with its reference to absent loved ones as Charbila laments “the distance between us and stars”. ‘All Day Long I Think Of You’ is angelic and vibey while still being dance-friendly, but like ‘All I Want’, it relies on a minimal repetitive lyrical topline.

If clubbing is still your thing, then ‘Love & Unity’ will appeal and with Kylie Minogue going ‘Disco’

again, maybe the time is right to hang the gliterball up again. But for long standing KID MOXIE fans, the wonderfully atmospheric depth of ‘Saturn Returns To Disco’ will be the main point of interest.

‘Love & Unity’ is released by West One Music Group, available via the usual digital platforms