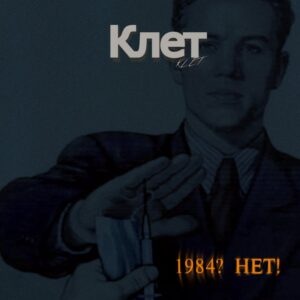 КЛЕТ is a music project of Bohemian-born composer and producer Michal Trávníček.

His debut album ‘Alconaut’ was undoubtedly the best instrumental synth release of 2021 and primarily celebrated the Soviet space programme with its impressive series of firsts, while also reflecting on how after the collapse of the union, in the fallout of the freedom now available with capitalism, life was not rosy for all. Less than half a year after the release of ‘Alconaut’ comes a musical appendix ‘1984? No!’. КЛЕТ rather poignantly dedicates to his new long player to “any individual mind that feels oppressed. My heart goes out to you!”

Thematically facing that past brave new world with relevance to today’s international political landscape, while 1984? No!’ could be considered a natural progression, opening track ‘Kaif’ displays a more uptempo and funkier template than was heard on ‘Alconaut’. Paying tribute to his birthplace, ‘Bohemia’ is also seeded from ‘Alconaut’ if less spacey. But ‘Piramida’ re-explores those atmospheres with an electro beat groove while ‘Hollywood Moon Landing’ is much floatier.

In honour of the first modular space station, the appropriately weightless ‘Mir’ provides another Sovietwave metaphor for the secrecy of the USSR progressing to more open international collaboration. ‘Horizon’ is more percussive and throws in tabla textures but while ‘Chukotka’ drifts along, ‘Dystopia’ comes over more threatening with chunky synthbass pulses if retaining atmospheric qualities. 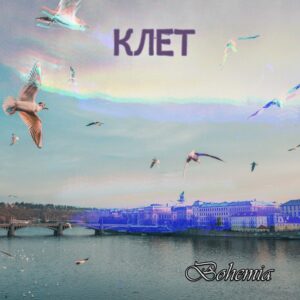 Celebrating the first spacecraft to land successfully on the moon and return data, the celestial synthwave of ‘Luna 9’ wouldn’t have sounded out of place on ‘Alconaut’ while ‘Svoboda’ provides a pretty highlight. More stark and with partial distortion but remaining melodic is ‘Stolen Future’, continuing КЛЕТ’s assertion that the fall of The Iron Curtain was not necessarily a positive thing for some citizens in the former Eastern Bloc.

Using harp-like approximations and a steadfast metronomic beat, ‘Chillout’ does what it says on the tin before ‘Propyat’ closes the album with a beautiful sustained piano work that is embellished by the odd choral effect.

The impressive ‘Alconaut’ was always going to be a hard act to follow and in comparison, ‘1984? No!’ does come over as less immediate. The celebration and sadness of its predecessor is also felt on this worthwhile follow-up, even though it is pointing in a more ‘Don’t Look Up’ direction.

‘1984? No!’ is available on the usual online platforms including https://claat.bandcamp.com/

Posted in Reviews Tagged with КЛЕТ

THE ELECTRONIC LEGACY OF 1982