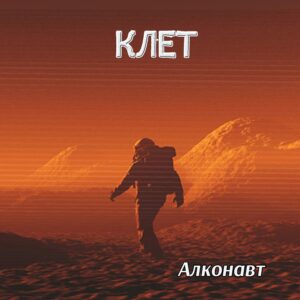 КЛЕТ (or KLET when using the Roman alphabet) is a music project by the Bohemian-born composer and music producer Michal Trávníček.

Now based in Stuggart, Trávníček grew up in the Eastern Bloc behind The Iron Curtain. But when that came down, he had to deal with the sudden freedom now available to him. As capitalism and Western culture was encouraged, it was not all rosy for others. For some who were old enough to remember, the days of Soviet rule did have a number of positives; citizens had work and comradeship, while there was also the excitement of Star City where cosmonauts of the Космическая программа СССР were trained.

While in the West, the exploits of NASA have been rightly celebrated with the first manned moon landing, the Soviet space programme had an impressive series of even more firsts; first satellite, first animal, first man, first woman, first multiple orbit mission, first multi-crew mission, first mission without the use of spacesuits, first spacewalk, first man-made object to reach the Moon, first sample of lunar soil brought back to Earth and first space station. Meanwhile Gherman Titov was until very recently, the youngest person in space aged 25 at the time of his flight in Vostok 2.

But with such technological boundary pushing into the unknown, tragedies inevitably occurred with the first four deaths in space of Vladimir Komarov, Georgy Dobrovolsky, Vladislav Volkov and Viktor Patsayev. The Soviets abandoning their own manned moon mission and the Buran shuttle were further symbols to its decline, with the Chernobyl nuclear disaster being the turning point. But with variations of the Soyuz rocket family still launching humans into space 55 years on, there has been a lasting impact.

Self-described as “full of nostalgia for a future that has never happened”, Michal Trávníček uses space travel and the end of Soviet rule in Eastern Europe as the conceptual metaphor for his debut album ‘Алконавт’ or ‘Alconaut’; the title is a portmanteau of alcoholic and cosmonaut to reference to “any human being who can either achieve the highest high becoming an astronaut or dropping to the lowest low as an alcoholic…”

The album’s pivotal track is its opener ‘Gagarin’s Start’ which honours the handsome hero who was the first man in space as he prepares for lift-off with a suitably spacey slice of Sovietwave comprising of chromatic ivory hooks and an absorbing synthbass backbone. The sparkling sparseness of ‘Eternity’ with its stuttering vintage drum machine provides another highlight.

As the floaty mood of ‘Sputnik’ acts as a pretty travelling companion, ‘Yearning’ offers a reverberant pulse of hope. Moving away from total atmospherics, ‘Black Heaven’ offers some percussive tension while a pitched up voice sample adds an eerie quality to ‘Computer Love’, not a cover of the KRAFTWERK tune.

However, ‘Sound With Soul’ and the uptempo ‘Vostok 1’ both falling prey to more typically North American synthwave approaches which dilute the overall Europeanness of the work slightly. But closing ‘Alconaut’, the elegiac ‘Laika’ presents a gently ringing sound painting to illustrate the sad realisation that school teachers hid the fact that the beloved space dog never actually returned from her adventure around the Earth on Sputnik 2.

Thematically, ‘Alconaut’ has much in common with BETAMAXX and his most recent long player ‘Sarajevo’ which also documented a positive landmark in the history of the Eastern Bloc before things turned sour. This combined celebration of achievement and sadness captured in the weightless melancholy of ‘Alconaut’ is a fine tribute to those who weren’t able to get along after the collapse of the Soviet Union and the groundbreaking exploits of the Soviet space program.

While Michal Trávníček prefers a more enigmatic personal image (although he’s not immune to posing in a Feyenoord football shirt on his Instagram), the considered presentation of ‘Alconaut’ with its Cyrillic scripture, space travel imagery and videos edited from the Russian biopic ‘Gagarin: First In Space’ all work a treat meaning that in this case, the book really can be judged by its cover.

‘Alconaut’ is available on the usual online platforms including https://claat.bandcamp.com/album/-

Posted in Reviews Tagged with КЛЕТ