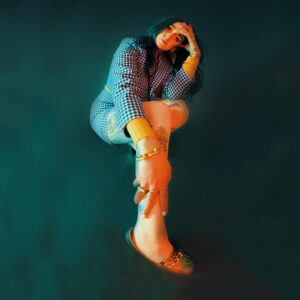 Although distributed by Bordello A Parigi, the same Amsterdam label that recently released the uptempo ITALOCONNECTION album ‘Midnight Confessions Vol1’, the heavy disposition of ‘Works & Days’ from Dutch producer Alina Valentina could not be more different.

A product of solitary confinement and recorded during the worldwide pandemic crisis, the eight misanthropic tracks on ‘Works & Days’ reflect their era with a sci-fi noir atmosphere as if trapped in a space station with only occasional communication to keep in touch with the happening of the outside world.

It is unsurprising therefore with its use of vintage synthesizers like the Korg MS20 and Korg Poly 800 as well as newer ones such as the Moog Grandmother that John Carpenter has been an influence. This was particularly evident when Alina Valentina opened her account in 2020 with ‘L’Ascenseur’, a split release with Dim Garden to which she contributed four instrumental tracks and of which, ‘Blood’ owed more than debt to The Horror Master.

‘Works & Days’ takes a step forward by adding vocals and more song based structures although it is still very darkwave in nature. The detuned rings of ‘That Thing Behind The wall’ enhance its horror film atmosphere complete with sharp metallic bashes, while the doom and gloom of ‘The Visitor’ captures the dread of waiting for that knock on the door. 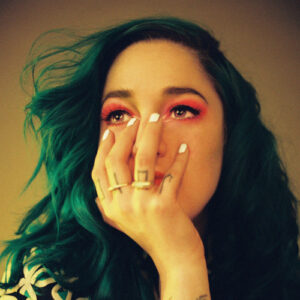 The album’s highlight ‘True Romance’ is an unusual love song which accepts the inevitability of being six feet under because “we eat, we sh*t, we die but we will have each other”; it’s a vibrant electronic statement that doesn’t shy away from darker resonances despite the wish to live longer! But the suitably titled ‘Horrible Place To Die’ captures more of that fatalistic mood with an appropriate vocal tone to “choose your ending right”.

The ‘Works & Days’ title song is representative of the whole album’s minimal lo-fi aesthetic with detached vocals accompanied by sombre drones that ably encapsulate the last year or so’s discontent.

Meanwhile, the metronomic bleep and rumble of ‘Babel Fish’ references the bright yellow fish from ‘The Hitchhiker’s Guide To The Galaxy’ that acted as a translator when placed in an ear and is inventively used as a surrealist metaphor to highlight communication breakdown.

With an icy Eurocentric demeanour, speedy arpeggios and a primitive rhythmic snap pattern, ‘What You Are’ could actually be something from the Italians Do It Better stable while despite some unsettling deep synthbass, ‘Sick Of You’ possesses shinier passages to lighten the cavern despite the frustrated notion of its title.

There is an appealing aloofness in ‘Works & Days’ that reflects a desire to escape. This is all despite a personal existential crisis within due to the uncontrollable forces of nature being tilted over the edge by consumerism and greed. As a result, Alina Valentina’s opus is not a cheerful affair and a bit grim in places but it’s all part of her charm. Ultimately it will appeal to those electronic music aficionados who prefer Cosey Fanni Tutti to comfy synth.

‘Works & Days’ is self-released in digital formats, vinyl LP available via Bordello A Parigi in September from https://bordelloaparigi.com/shop/vinyl/alina-valentina-works-and-days-lp/