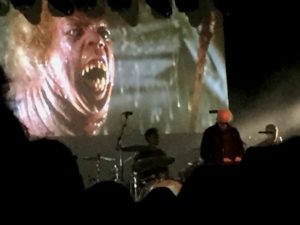 JOHN CARPENTER’s career as a film maker has run parallel to that as a musician allowing him to have control over not only the visual in his movies but also the audible too.

In fact, a look at his IMDB listing shows his credits under “Soundtrack” are almost double the number of credits for “Director”. But this really shouldn’t come as a big surprise at all. Carpenter’s father Ralph was head of the music department at Western Kentucky University.

John himself studied there before going on to film school in Los Angeles. From the earliest days as a director with the Oscar winning short film ‘The Resurrection of Broncho Billy’, he has provided the musical accompaniment to his films, writing some of the most memorable scores along the way.

In recent years, his influence can be heard across both film and television soundtrack and also in the new influx of bands releasing under the Synthwave genre. This in turn has not only lead to a reappraisal of Carpenter’s musical output but also the surprise release in 2015 of ‘Lost Theme’s, an album of soundtrack styled music produced with his son Cody and godson Daniel Davies, son of THE KINKS’ Dave. 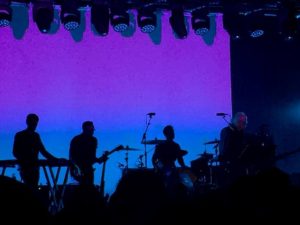 That release in turn brought Carpenter’s soundtrack work together on ‘Anthology’, and an extensive tour to support. And so to legendary Glasgow Barrowlands and the show under scrutiny here…

It was always going to be a strange offering, given the sort of music being performed and the potential audience this would attract. And looking at the queue outside the famous Glasgow venue, the mix was indeed eclectic to say the least. Film geeks rubbed shoulders with Synthwave guys in trucker caps and rockers.

Inside, the near capacity crowd waited patiently whilst the merch stall did a roaring trade in shirts and tour edition vinyls. The stage was sparse apart from a large screen behind the band which added to the anticipation amongst many of the folk around where we stood.

The man himself wandered cooly onstage about 10 minutes later than scheduled with his younger 5 piece band and with a quick “Good evening Glasg-Gow”, launched into the set. Opening with ‘Escape From New York’, the video screen came to life and we were treated to a greatest hits from the movie. This approach accompanied the film pieces throughout and led to a few strange moments when the crowd cheered what was on screen louder than the music that was playing alongside. 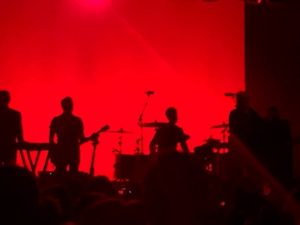 The iconic ‘Assault on Precinct 13’ followed with its relentless synth bass and large string motifs. Probably the most influential of JC’s works, it has been referenced by many electronic and hip-hop acts. There was even a vocal version released in 1975 by Trinidadian singer Jimmy Chambers with lyrics by Kenny Lynch and titled ‘You Can’t Fight It’. It’s now, thankfully, a rarity!

For a more listenable take look for ‘Assassin’ by Mark Shreeve which takes the piece and adds to it in a very acceptable way.

“We now visit a place none of you have ever been to…” says Carpenter of ‘The Village of the Dammed’ which led one wag in the crowd to reply “You’ve obviously no’ been to Cumbernauld big man!”

Following this, ‘The Fog’ slowed things down before we had the first of 3 tracks from the aforementioned ‘Lost Themes’. This brought an interesting observation from Glasgow promoter Barry Douglas who was with me at the gig: “All the Synthwave bands are influenced by Carpenter but the ‘Lost Themes’ stuff sounds like any other Synthwave act”; this has some credence but why that should be is harder to fathom. Carpenter himself said the ‘…Themes’ albums were fun as he had no pressure to score over images. Perhaps the combination of working in both media however is what makes Carpenter Carpenter…

Normal service was quickly resumed with the band all donning sunglasses for an excellent ‘They Live’ which had some people bizarrely dancing along. Then came 2 pieces from the soundtracks Carpenter didn’t write. ‘Starman’ was dedicated to the beautiful women of “Glas-Gow” and the Ennio Morricone penned main theme from ‘The Thing’ were followed by ‘Distant Dream’ from ‘Lost Themes’.

From here, it was all Carpenter however. “Have you paid your dues Jack? Yes Sir, the cheques in the mail” heralded ‘Big Trouble in Little China’ and brought the 2nd biggest cheer of the night, before the moment most had been waiting for.

The 19th of October saw the release of the latest ‘Halloween’ movie and the theme from this segued effortlessly into the classic piano motif of the 1978 original. From here, the pacing of the show dropped off a little underlining that this wasn’t a rock show despite the venue and the staging. 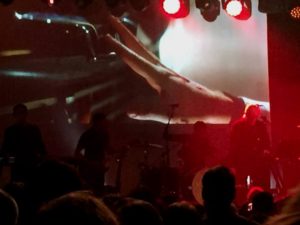 An encore consisting of some of his later work was rounded off with the message to drive home safe and the theme from the Stephen King adaptation ‘Christine’.

Heading out into the developing chill of a Glasgow (Glas-Gow?) October evening, I was left to ponder on what the legacy of JOHN CARPENTER will be. As a film maker, the extracts that formed a visual greatest hits to accompany the music certainly left me wanting to revisit some of those films.

As a musician he should be recognised as one that brought the synthesizer into the soundtrack mainstream and in doing so, probably exposed as many people to electronic music for the first time as JEAN-MICHEL JARRE and VANGELIS. For that we should be thankful.

We may even in the long run be able to forgive him for being one of the fathers of Synthwave. 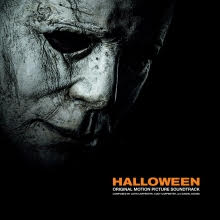