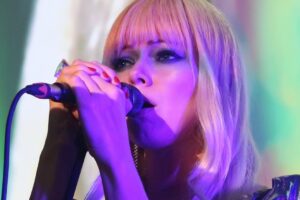 It may have been ‘Double Exposure’ but the Italians Do It Better triple bill at The Roundhouse in London was a conceptual artistic triumph from the bottom up.

Headlined by CHROMATICS, the line-up also included their label mates DESIRE and DOUBLE MIXTE with all three acts having the multi-instrumentalist, producer and IDIB head honcho Johnny Jewel in common. The audience entered The Roundhouse under hazes of red light with a slide show of the Italians Do It Better roster projected onto the three stage screens.

It was obvious this was not going to be any old rock and roll show. More like an arthouse cinema presentation, many of images had family members such as HEAVEN, IN MIRRORS, DOUBLE MIXTE, GLASS CANDY, KRAKÓW LOVES ADANA, JORJA CHALMERS, DESIRE and of course CHROMATICS captured in superbly designed mock movie posters, emphasising the cinematic thread running through the label. And with accompanying music from the likes of TESS ROBY and ZOLA JESUS, the artistic circle was complete. 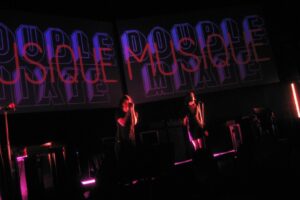 Beginning the live proceedings were brooding Parisian duo DOUBLE MIXTE, coming over like a modern day Jane Birkin and Serge Gainsbourg but with a lively techno backbone.

The Gauloises flavoured film noir synergy of Clara Apolit and Thomas Maan came over in a combination of feminine Gallic prose over fat bursts of synths for a dark disco soundtrack that had decadent cool written literally all over it.

This was especially evident on their debut IDIB single ‘Romance Noire’ and the striking visuals of rotating tape reels and VU meters certainly aided the DOUBLE MIXTE presentation cause in what can only be described as an impactful opening set.

Next on stage came DESIRE, the IDIB project fronted by Megan Louise, the charismatic PVC dressed Canadian other half of Johnny Jewel. With the band featuring Johnny Jewel and CHROMATICS drummer Nat Walker with the stylish enigmatic figure of Aja, singer of HEAVEN on keyboards, the quartet fielded their distinctly danceable style of classic synthpop, as exemplified by ‘Mirroir Mirroir’, ‘Don’t Call’ and ‘If I Can’t Hold You’. Living up to Megan Louise’s more brazen persona, things got particularly saucy during an enjoyable note-for-note cover of NEW ORDER’s ‘Bizarre Love Triangle’. 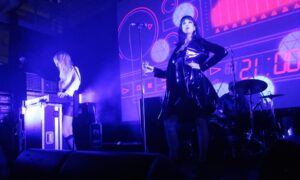 Megan Louise literally got into the spirit of the song’s title and had a snog with Aja in full-view of her boyfriend on the opposite side of the stage.

Closing the DESIRE set with ‘Under Your Spell’ from the influential soundtrack to the Ryan Gosling film ‘Drive’, Megan Louise certainly warmed things up although as she departed, Aja and Johnny Jewel stared each other out in a sustained and ferocious drone duel of the Korg 700 synths.

And with that, the classic synthpop vibe did not subside with Romy Madley Croft of THE XX providing a superb DJ set of synthpop classics including tunes by YAZOO, OMD’s evergreen ‘Messages’, the Italo cult classic ‘Spacer Boy by CHARLIE and Q LAZZARUS’ ‘Goodbye Horses’, a song which appeared in the Jonathan Demme directed movies ‘Married To The Mob’ and ‘Silence Of The Lambs’. 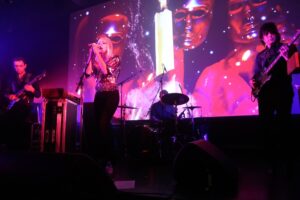 Jewel and Walker returned to the stage with guitarist Adam Miller as CHROMATICS prepared to open their headlining set with an abridged ‘Tick Of The Clock’ before the captivating presence of the stunning Ruth Radelet entered the room for a wonderful rendition of ‘Lady’.

While there was glamour, her aura exuded a darker fatalistic quality after the provactive sass of DESIRE. ‘Kill For Love’ from the 2012 album of the same name highlighted their cross of NEW ORDER styled indie guitar pop and electronic grandeur.

While it all combined to give CHROMATICS their unique selling point, there were also doses of shoegaze derived creative distortion.

The carefully considered visuals were particularly striking with ‘Night Drive’, ‘Back From The Grave’ and ‘I Can Never Be Myself When You’re Around’ accompanied by images ranging from Korg Mono/Poly synths and blood stained guitars to speedy clocks.

Radelet’s exquisite visage would look like a Hollywood starlet one moment and then distort into an image more unsettling the next. While material from the recent stop-gap album ‘Closer To Grey’ was noticeably absent, concessions were made to newer material like the single ‘Time Rider’ released earlier in 2019. 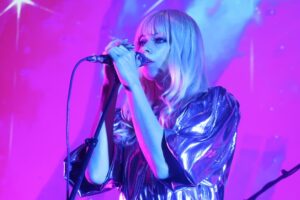 Miller took to the mic for the lengthy electro art funk of ‘These Streets Will Never Look the Same’ before Radelet’s breathy vocal return on ‘I Want Your Love’.

The eerie ‘Cherry’ with bubbles of bright synth and treated guitar showed CHROMATICS at their best with a sinister groove to accompany Radelet’s forlorn vocal delivery, before a Neil Young cover in the shape of ‘Into The Black’ closed the main set leaving behind a suitably doom laden mood and an extended keyboard passage from Jewel.

For the encore, Radelet returned alone to give an enticing solo interpretation of Springsteen’s ‘I’m on Fire’, but for the casual fans of CHROMATICS in the audience, at last came ‘Shadow’, the ghostly wistful number that came to prominence thanks to its inclusion in ‘Twin Peaks: The Return’. However, although Radelet’s wispy vocal performance was superlative throughout, the use of guitar rather than string machine for the main melodic theme perhaps lacked the emotive chill of the studio recording. 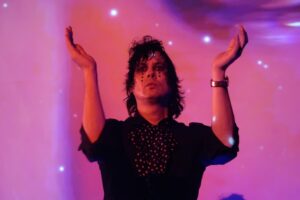 To end the evening, a respectful rhythmic version of Kate Bush’s ‘Running Up That Hill’ gave Johnny Jewel an opportunity to fully exploit the buzzing capabilities of his Korg 700.

And as each member of the band walked off the stage in turn, Jewel was still there at the end, knob twiddling until it was obvious that it was way past curfew! Stylishly conceived and presented, many established acts could learn from how Italians Do It Better curated ‘Double Exposure’.

From the visuals to the lighting, to the outfits to the DJ and finally to the live music itself, it was like a danceable art installation. While the CHROMATICS set list wasn’t particularly ambitious and had changed little since their last London appearance in 2013, it was part of a complete experience that engaged on many levels. And with that, ELECTRICITYCLUB.CO.UK left The Roundhouse suitably entertained… 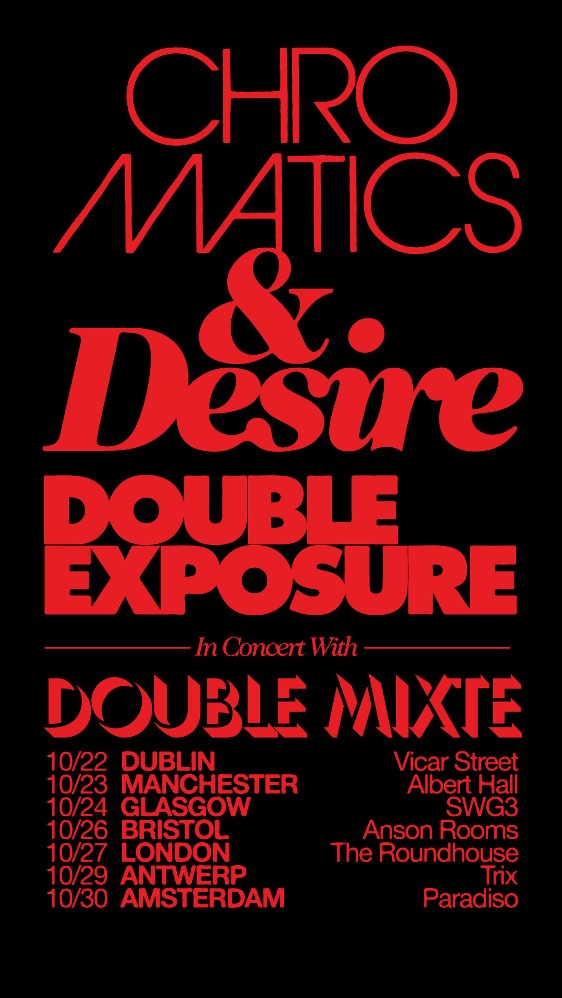