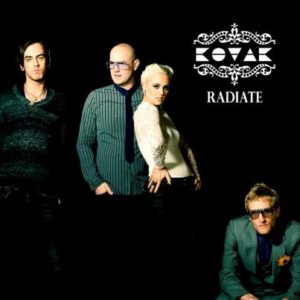 KOVAK have only been the second unsigned band to be playlisted on BBC Radio 2 and this accolade is a clear indication of their crossover potential.

The Brighton-based foursome relaunched in 2012 with the brilliant ‘Killer Boots’ and have been touted in some quarters as the British answer to SCISSOR SISTERS. But they are far better than that and much less irritating.

The SAINT ETIENNE meets BLONDIE and GIORGIO MORODER fusion of ‘Radiate’ may party like it’s 1979 but its crisp production adds a modern discothèque sheen to the fun, catchy ditty. It is simply syncopated heaven.

Driven by a tingling metallic sequence and sweetened by Annelies Van de Velde’s angelic vocals, ‘Radiate’ does what it says on the tin and puts in the shade most of the competition whose idea of an electronic dance song is to cut a mindless, repetitive house excursion with no tune! Along with TEXAN duo ELEVEN: ELEVEN, KOVAK know how to make people dance while adding a great tune and NOT cranking the beat to 12! Yes, it’s a great time to be an electropop act right now.

KOVAK will also be supporting REPUBLICA at Highbury’s The Garage in London on Thursday 14th March 2013.