April 10, 2010 / electricityclub / Comments Off on LA ROUX + HEAVEN 17 BBC6 Music Back To The Phuture Live Session 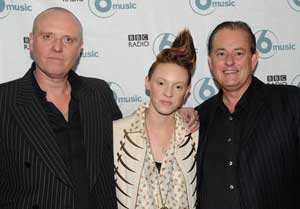 Following on from LITTLE BOOTS’ appearance with GARY NUMAN last December, February saw Mark Jones’ ‘Back To The Phuture’ collective arranged yet another memorable collaboration at the BBC Maida Vale Studios with a special performance by LA ROUX and HEAVEN 17.

Connecting the dots on electronic music, the endorsement of the UK’s two leading exponents of this modern-era has recognised their true synthesized credentials.

Steve Lamacq was on hand as compere this evening and while Mark Jones played the pre-show music consisting of vintage DAVID BOWIE, ANIMOTION, OUR DAUGHTER’S WEDDING, DEPECHE MODE and HUMAN LEAGUE to set the scene.

‘(We Don’t Need This) Fascist Groove Thang’ opens proceedings and still resonates as it powerfully fills the BBC Maida Vale Studio. Ironically, this song was banned by the BBC when it was released as a single in 1981 due to its “Ronald Reagan – Fascist God” baiting lyrical content. And here were HEAVEN 17, finally getting to play it for Auntie with Glenn Gregory standing by his original observation!

‘Geisha Boys & Temple Girls’ is next and sounds more like the ‘Penthouse & Pavement’ version in preparation for the tour which will see this seminal album played live for the first time in its entirety. Gregory and Ware’s favourite HEAVEN 17 song ‘Let Me Go’ closes the first part of the show with the squelchy Roland TB303 bassline that pre-dated acid house by five years taking prominence. What’s noticed is although this is basically an electro-funk song, it’s actually quite difficult to dance to!

LA ROUX then take to the stage and start their section with the fierce growl of ‘Tigerlily’, still one of the best tracks on the eponymous debut album. Next, the beautiful gospel tinged ‘Cover My Eyes’ with Ms Godfrey and Ms Bryan joining the band to assist on backing vocals. It great to hear another one of the highlights from the album performed live. For the end of the LA ROUX ‘solo’ set, the crowd are treated to a spirited rendition of ‘Bulletproof’. The sound is wonderfully crisp and crunchy within Maida Vale.

Elly and Glenn get together for the first collaboration and are an amusing sight to see. Elly’s trademark quiff has now got so big that standing next to Big Glenn, she’s almost as tall-tall-tall! They try to surprise us but after some light hearted deliberation about the size of lyric sheets, Big Glenn forgets to come in on the first verse of ‘In For The Kill’.

But the second take is magnificent with Big Glenn taking the lead vocal while Elly does her wailing interludes and angelic middle eight. Any scepticism that may still linger about the connection between LA ROUX, BEF and therefore early HUMAN LEAGUE can now be totally quashed. ‘In For The Kill’ is a quite obvious musical homage to that sound.

During the show’s interview, Glenn Gregory is asked by Steve Lamacq about how he first heard about LA ROUX when Elly interjects “when someone told him we were copying them!” Glenn then jokes that HEAVEN 17’s first contact with Elly was via lawyers! When Lamacq asks Ware about the incumbent technology around the studio, Ware proudly shows off his Korg 770S which was his first synth and is still being used today. “£350 in 1977 and it was buy that or a second hand car! I still have the synth but I still can’t drive!” said Martyn. “HE STILL CAN’T PLAY THAT!” retorted Big Glenn, pointing at the Korg with a glint in his eye!

The evening is filled with good spirited humour throughout that even brings smiles to the usually straight faced Sister Elly. During a break in recording, Steve Lamacq suggests to LA ROUX’s electronic percussionist Will that he must be good at ‘Rockband’ only for him to reply that he’s “cr*p” at it while Martyn Ware gleefully tells everyone that Glenn Gregory only got 78% doing ‘Temptation’ on ‘SingStar’!

Speaking of which, the HEAVEN 17 song they decide to collaborate on is probably a bit obvious but ‘Temptation’ is pulled off superbly. Elly may not have a natural soul voice like Carol Kenyon on the single or Billie Godfrey on the current live version but she can certainly hit those high notes in this classic. The audience cheered with approval mid-song as Big Glenn smiled and looked on in awe.

The cover version they attempt is again an obvious choice as the two acts explained their reasoning. Glenn Gregory suggested TERENCE TRENT D’ARBY’s ‘Sign Your Name’ as the original was produced by Martyn Ware, so there was already a HEAVEN 17 connection. But independently, Elly also thought of it as it was the inspiration for her own ‘Cover My Eyes’. So et voila, the combined ten piece band launch into a great uptempo electro-bossa nova reworking.

Elly Jackson looked extremely comfortable and relaxed performing with HEAVEN 17. This was a fantastic and unique night uniting two generations of the synthesizer. The BBC said in their press release: “Three decades ago HEAVEN 17 were instrumental in the popularisation of electronic music in the UK, and over the last year LA ROUX have come to prominence as one of today’s leading electro torchbearers. In bringing these artists together, BBC6 Music illustrates the lineage and influence of the genre from the 1970s through to the present day”.

It’s things like this and the LITTLE BOOTS / GARY NUMAN session that makes this whole licence fee worthwhile.