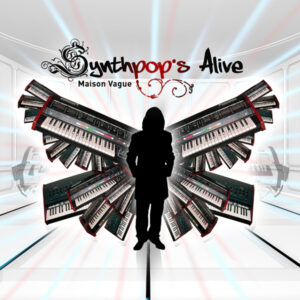 “Living in a dream since 1983”, MAISON VAGUE’s ‘Synthpop’s Alive’ was one of the surprise albums of 2011 and possibly the best wholly independent release of that year.

Paying homage to Synth Britannia and in particular, Gary Numan, it was the work of Clark Stiefel, an Essen domiciled American musician based in a modern day Neudeutsche Schule.

A classically trained virtuoso who studied piano and electronic music at a conservatoire, it was there that where he got to grips with both the Moog and Buchla modular systems that lit his passion.

With the eccentric demeanour of Hungarian 19th Century composer Franz Liszt, Stiefel added some quality musicianship and a wry sense of humour to the quirkily authentic proceedings. ‘Synthpop’s Alive’

was very much an album with air synth potential. The title track with its arching battlecry was initially a reaction to a YouTube video entitled ‘Synthpop Is Dead’. Totally disagreeing with its creator, Clark responded but instead of protesting via the comments section, he composed a song in a classic synthpop style.

Like the result of coitus between DEVO and PLACEBO, the opening Sci-Fi synth salvo and the line “Everyone’s entitled to opinion…you have yours and well, I have mine” was wryly countered with a retort of “And though it seems that our opinions differ… you’ll agree in time!” The blistering solo using an Oberheim OBXa is a total delight: “The OBXa has more of a rock’n’roll tone to it. I like that!” Stiefel told ELECTRICITYCLUB.CO.UK

Another familiar, stirring sound came courtesy of the Arturia Virtual Minimoog and its meaty octave bass drive. “One of the most brilliant pieces of software ever” added Stiefel. That particular VST dominated many of the album’s chunky riff laden tracks such as the immediately enjoyable ‘Pixelated Lover’. The combination of OBXa and Moog colours effectively revived The Gary Numan Principle and on the bouncily brilliant ‘Give Them Away’, ‘Observer’ from ‘The Pleasure Principle’ was developed into a far more complete composition. It also climaxed with a simulated violin solo that recalled ULTRAVOX’s Billy Currie who incidentally played on that same album. 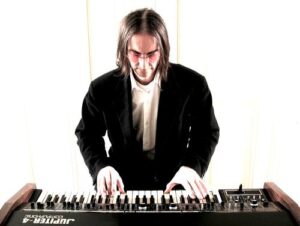 Its more steadfast cousin ‘Buried In Sandstone’ was also decidedly Numan-esque in a ‘Conversation’ style while ‘My Situation’ took its inspiration from THE HUMAN LEAGUE but presented itself with a more symphonic overlay.

Voiced by Stiefel’s snarling mid-Atlantic tone, it was as if PLACEBO had come from industrialised Sheffield.

Slightly punkier, ‘We’re Not Human’ was also cut from a similar cloth. The album however was not all Numanoid pastiche.

Affirming the multi-dimensional aspirations of the album, the hilarious and appropriately titled ‘No Show’ was a fine example of Bette Midler gone electro or even ‘Bugsy Malone’ with lasers instead of splurge guns… inspired by death of Michael Jackson, its sense of irony was an amusing musical diversion and wholly fitting in the context of MAISON VAGUE.

But to bookend ‘Synthpop’s Alive’, album closer ‘Living On Ice Cream’ returned to the former Gary Webb and looked back at his TUBEWAY ARMY days to ape ‘Replicas’ outtake ‘We Have A Technical’. As icy and surreal as the title, ‘Living On Ice Cream’ was a terrific closer that was both exhilarating and fun. As a whole, ‘Synthpop’s Alive’ combined midlife paranoia with fish-out-of-water eccentricity but a tongue-in-cheek slyness allowed the listener not to take it all too seriously…

The future could be seen though ‘Colored Glasses’ but for the follow-up, there may be some other plans as Stiefel has surmised: “I definitely feel musically I’m heading in a more minimal and transparent direction. This is an extreme example but if you could imagine Leonard Cohen playing synths. When one thinks of singer/songwriters, the first thing that comes to people’s heads is a guitar. You don’t really think of a singer/songwriter with a synth. But if the song is strong enough, then maybe you could just have a minimal accompaniment – perhaps only a Jupiter 4 and TR 606 drum machine? It’s only a dream at this point but this is definitely brewing in the back of my head.”

is still available as a download album via Amazon