August 6, 2013 / electricityclub / Comments Off on CHVRCHES The Mother We Share 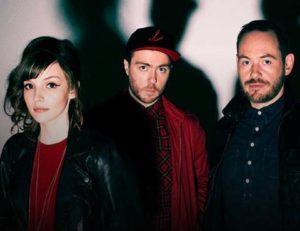 With their debut album ‘The Bones Of What You Believe’ due out on 23rd September 2013, CHVRCHES will be re-issuing the gloriously sumptuous ‘The Mother We Share’ on 16th September to precede it.

Originally released in the Autumn of 2012, the mix has been slightly polished up and features what sounds like a re-recorded vocal. With it comes a glossy new promo video, courtesy of the budget now available having signed to Virgin Records.

Like TAYLOR SWIFT gone electro having uprooted to Berlin, ‘The Mother We Share’ is synthpop perfection and there is even a mash-up of TAYLOR SWIFT’s ‘We Are Never Ever Getting Back Together’ and the Glaswegians’ ‘Recover’ doing the rounds that confirms the description is not quite as daft as it seems… whatever, CHVRCHES immediacy can be explained within that song. Despite the catchy chorus, ‘The Mother We Share’ is not wholly bubblegum and futuristic sounds warble off and on!

It has been a most amazing 2013 for Lauren Mayberry, Iain Cook and Martin Doherty. As well as coming 5th in BBC Sound Of 2013 and 2nd in Blog Sound of 2013, the trio have been impressing in Europe supporting DEPECHE MODE on five of their summer stadium dates. German Mode fan Grit Cheraka commented on eLECTRICITYCLUB.CO.UK’s Facebook “they were great in Prague!” while Holger Splanemann added: “The very best part of the DM show in Prague. I wanted electronic music and got it only from Chvrches. Never again DM… but for sure Chvrches”.

With their debut album featuring songs such as the hook laden but progressive ‘Night Sky’, the piercing beauty of ‘Lungs’, the affected off-kilter anthem ‘Recover’ and the rousing calling card of ‘Lies’, CHVRCHES could make a true believer of anyone.