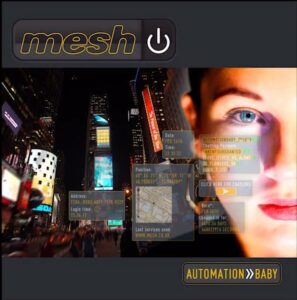 MESH have been around for over 21 years and are the UK’s secret export to the EU.

Making their fortunes in Germany on the lucrative Pluswelt circuit, the Bristol outfit were so highly regarded at the turn of the century that their 2002 album ‘Who Watches Over Me?’ was released on Home, a German subsidiary of Sony where one of their label mates was KARL BARTOS. Often cruelly referred to as De-MESH Mode, while constituents of their sound are familiar, there is much more to them; their catalogue contains several rousing tunes with  ‘Trust You’, ‘Little Missile’, ‘Crash’ and ‘Only Better’ as proof of their capability.

Their previous offering ‘A Perfect Solution’ saw a darker shift compared with its predecessor ‘We Collide’ and ‘Automation Baby’ continues that journey with detached virtual relationships as its thematic core. MESH’s founders Mark Hockings and Richard Silverthorn know their audience so the lattice of danceable electro-rock and incidental instrumentals from previous albums continues.

And like that other Germanophile IAMX, MESH often fill the void apparent in DM’s inconsistent 21st Century output. ‘Taken For Granted’ for example is a steadfast stadium stomper in the vein of DM’s ‘Never Let Me Down Again’. Meanwhile, opener ‘Just Leave Us Alone’ is a classic MESH anthem while ‘You Want What’s Owed to You’ and ‘Flawless’ ensure that things are business as usual.

Although MESH have always tackled ballads to a certain degree, the atmospheric maturity of those on ‘Automation Baby’ are a big surprise. The beautiful ‘It’s The Way I Feel’ shows a more sensitive side with hints of Ennio Morricone. Shaped by acoustic guitar and string machine washes, it provides a welcome diversion while ‘Adjust Your Set’ possesses some subtle traits despite its mechanical rhythms. 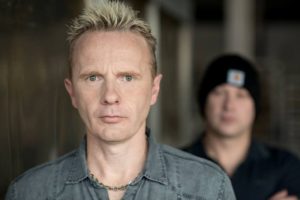 And the aptly titled ‘You Couldn’t See This Coming’ sees Hockings’ passionate angst over gentle step sequences and orchestrated backing to make an appropriate closer.

MESH have a loyal and passionate fanbase who have been more than vocal about the band’s lack of critical recognition. They will be more than happy with the majority of ‘Automation Baby’. But with the sonic balance bolstered by additional strings to their bow, there could be some new recruits too.

is released by Dependent on CD, limited edition 2CD and download formats

MESH play an extensive UK and European tour between March and April 2013.