February 6, 2016 / electricityclub / Comments Off on METROLAND Things Will Never Sound The Same Again 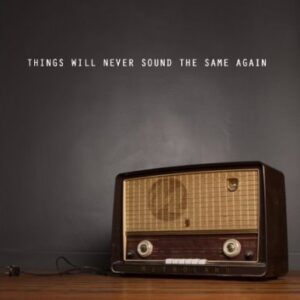 The year had begun on a high for METROLAND with the critical acclaim for their Bauhaus conceptual opus ‘Triadic Ballet’.

Praise on the album was accorded from Andy McCluskey and Rusty Egan, two electronic pioneers who both also later witnessed METROLAND’s live presentation dedicated to Passenger L at the Electri_City_Conference in Düsseldorf.

The Brussels based duo have recorded ‘Things Will Never Sound The Same Again’, a musical eulogy created from scratch as their way of paying homage to their fellow passenger. A key figure on the Belgian independent music scene, each of the track titles describes or embodies what Louis Zachert meant to Passengers A and S, from his witty e-mail headers and the name of his recording studio to his genuine love for electronic music and life itself.

Understandably, ‘Things Will Never Sound The Same Again’ has a much darker overtone compared with the energetic colour cast of ‘Triadic Ballet’. Despite the mellower sound, there are still bright analogue melodies and pulsating rhythms that celebrate moments and memories. The opening ‘Vie (Mental Impressions Reproduced By Electronic Means)’ is an example of the darker template that embodies the obvious feelings of loss. 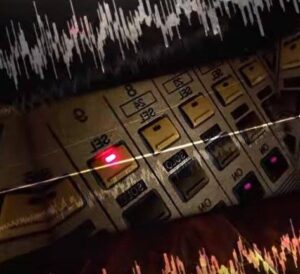 But as the French word for ‘life’, Louis Zachert wanted to translate impressions of daily life into soundscapes using analogue synthesizers or as METROLAND put it: “Synthetic music used to express feelings, precisely that what we tried to achieve with this tribute”.

And with the appropriately titled ‘Synthetic Sound’, Passengers A and S are doing what they do best, placing tightly sequenced patterns in cohesion with mechanical percussion and resonant arpeggios. Using grainier textures, both ‘Good Moaning’ and ‘This Little Thingy’ continue with this deeper outlook, not quite funereal but most definitely solemn.

The steady bass driven ‘Things Will Never Sound The Same Again’ title track follows along similar lines and it is certainly interesting to hear METROLAND using simulated wah-wah guitar sounds next to symphonic synth strings. But the life celebration begins in earnest with ‘Brother’ which despite its brighter melodic overtones, is offset by an honest human vocal.

“We sometimes used to tease Louis with a song by the band MODERN TALKING ‘Brother Louie’… you should then have seen the look on his face… priceless” recalled Passengers A and S, “we kindly invited someone to provide vocal samples for our brother from some Basildon rooted band that we all used to like very much. And so, with a poppy undertone, the Basildon sound and voice, this became our own ‘Brother’ (Louis) song…”

The uplifting ’Music / Machine’ with its Jarre-esque melodies and early HUMAN LEAGUE bass motif is not an original song but a METROLAND remix of MUSICOCOON, a project involving Louis and his friend Philippe Malemprée. Kindly donated, its presence is in honour of Louis as the last piece of music he ever worked on. It comes at just the right moment and does what any successful eulogy should do, providing comfort and optimism with Passenger L living on in the music.

With this in mind, the best way Passengers A and S can pay tribute to their friend is to be themselves; and this is captured on ‘Under The Roof’, probably the most characteristic METROLAND track on the collection. ‘Under The Roof’ was also the name of Louis’ mastering studio…

‘Quo Vadis’ is Latin for “Where are you going?” and has a lovely until we meet again tone about it; but it was originally recorded two decades ago with a female vocalist. “There was one song entitled ‘Passing By’, which had this mellow melody we always liked… but it never worked out. Louis’ spirit, somehow gave it what it needed, and we both believe it was Louis who made it happen this time. Louis gave us the inspiration and correct drive to finish what we started there, he was with us and still is”. And thus “The last song on this tribute sums it up” say METROLAND, “Where are you going Louis?… No matter where, you remain with us forever”

Throughout history, sadness has inspired beautiful art and wonderful music. Yes, ‘Things Will Never Sound The Same Again’, but while this chapter is tinged with sorrow, this touching memorial brings a sense of closure while not forgetting the man who helped get METROLAND to where they are today; it’s fair to say Louis Zachert would have loved this.

‘Things Will Never Sound The Same Again’ is released by Alfa Matrix on 16th February 2016, CD available via http://alfa-matrix-store.com/metroland-things-will-never-sound-the-same-again-CD