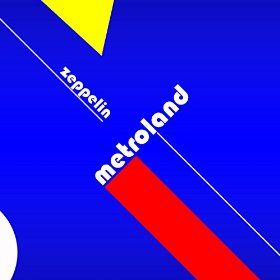 ‘Zeppelin’ develops on the melodic but warm technopop showcased on their debut album ‘Mind The Gap’ with tracks like ‘Enjoying The View’ and ‘T.F.L.’, shaped by sweeping synths and precise drum machine beats.

Capturing the romance of these huge yet almost silent machines, the take-off is hauntingly counterpointed by one of the B-sides in the ‘Spacious Edition’ download bundle ‘The Hindenburg Landing’.

This is a dramatically eerie electronic number which contains the harrowing report by journalist Herbert Morrison recorded at the time of that fiery airship disaster. Keen to explore new adventures, the other B-side of ‘Zeppelin’ is the brilliant uptempo sound of ‘(We Need) Machines Without Romance’. Now imagine if GARY NUMAN had actually joined KRAFTWERK in 1979. The concept is an enticing proposition and in fact, it perhaps defines the direction that METROLAND are heading with ‘Triadic Ballet’.

Inspired by Bauhaus, the German art movement led by Walter Gropius, not the Goth rock band led Peter Murphy, Gropius theorized about uniting art and technology in his 1923 lecture ‘Kunst Und Technik – Eine Neue Einheit’. METROLAND have been certainly working towards the 21st Century interpretation of that goal.

Passengers S and A said back in Autumn 2014: “For the central theme and concept for this next album, we will be musically travelling to Germany… the style of music is a little darker and harsher than on ‘Mind The Gap’”

‘Zeppelin’ featuring ‘(We Need) Machines Without Romance’ and ‘The Hindenburg Landing is available now in two download bundles including assorted remixes via Alfa Matrix.

Posted in Reviews Tagged with Metroland