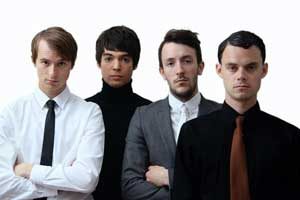 As recently recommended by Andy McCluskey, MIRRORS are electronic pop-noir with roots in North by North West new wave gloom despite hailing from sunny Brighton!

Just back from supporting DELPHIC, this quartet with an instrumental line-up of three synths and electronic percussion will delight fans of ORCHESTRAL MANOEUVRES IN THE DARK’s early pioneering work.

MIRRORS look the part too, possessing a stylish sense of European modernism. While brilliant songs such as ‘Fear Of Drowning’ and ‘Somewhere Strange’ may echo the musical template of Wirral’s finest, vocally MIRRORS recall the young manhood and revolutionary spirit of lost Merseyside acts such as THE WILD SWANS and BOX OF TOYS.

Their most recent single ‘Into The Heart’ possesses a beautiful slice of melancholic rush while ‘Look At Me’ which was released last year is more downtempo with a chilling sonic cathedral grandeur alongside a percolating Linn Drum pattern that sounds like JOY DIVISION produced by Martin Rushent. With both songs, the inevitable words wistful and evocative spring to mind.

Meanwhile on the other side of the synth spectrum, ‘Searching In The Wilderness’ is an early DEPECHE MODE pastiche given New Life. But it succeeds because it’s a good danceable tune with some added screeching effects. Party like it’s 1981? It could be one of those Futurist nights at ‘Crocs’ all over again!

One dictionary definition of mirror is: “A pattern for imitation; exemplar: a man who was the mirror of fashion. Something worthy of imitation”

So, it looks like HURTS aren’t going to have it all their own way then!

Posted in Introducing Tagged with Mirrors