July 15, 2010 / electricityclub / Comments Off on MIRRORS Live at White Heat 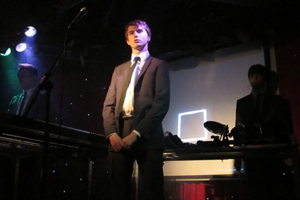 Madame Jojo’s in London’s Soho was the location for a headline show by the highly rated MIRRORS, courtesy of indie club night White Heat.

The Brighton quartet have been busy finishing their debut album which is to be released on Skint Records later this year and doing superb Un Autre Monde remixes of WHITE LIES’ ‘A Place To Hide’ and AU REVOIR SIMONE’s ‘Tell Me’.

Following their well-received support slot with DELPHIC earlier this year, they’ve also been honing their stage presentation to compliment their pop noir sound. One dictionary definition of mirror is: “A pattern for imitation; exemplar: a man who was the mirror of fashion. Something worthy of imitation”. So when MIRRORS take to the stage tonight, they look like ‘Organisation’- era ORCHESTRAL MANOEUVRES IN THE DARK beamed into the 21st Century. 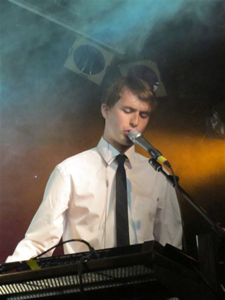 Reflecting a sense of intelligent European modernism, the quartet arrive in stylish suits and thin ties to a industrialised stage set of alloy spaceframe structures housing all the incumbent technology.

Some beautifully arty film projections enhance the image. MIRRORS “are attentive to minutiae”.

Consisting of James (lead vocals, synths), Ally (synths and backing vocals), Tate (synths) and Josef (electronic percussion), they open with ‘Fear Of Drowning’, its pulsing sequences and dense sweeping chords benefit from the loudness to take full hypnotic effect. It sounds magnificent. MIRRORS “are minimally over the top”.

New single ‘Ways To An End’ has a synthetic TALKING HEADS tribal flavour with a touch of THE HORRORS. James possesses a vibrant stage presence that matches his enthusiasm. He’s like a cross between the dancing Geography teacher of Andy McCluskey and the science student at the Vicarage tea party of Paul Humphreys. Could he actually be their love child? Maybe things went further in that plush sports car after the end of the Souvenir video? MIRRORS “are a vehicle for refraction”. 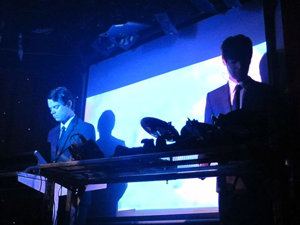 The mournful ‘Organ Song’ follows before the band launch into the brilliant ‘Into The Heart’.

The audience reaction is certainly something to see; a young discerning music crowd, male and female, dancing away passionately just like in the early days of ORCHESTRAL MANOEUVRES IN THE DARK… none of this arms folded sitting still at the front nonsense that has blighted some of the more recent shows of Wirral’s finest!

James laps it all up along with co-front man Ally. Tate though pensively keeps control at the back while Josef stands almost motionless as a sticksman in the KRAFTWERK stand-up tradition. He looks like he could be the younger electro version of BLONDIE’s drummer Clem Burke. MIRRORS “follow the straightest of lines”. 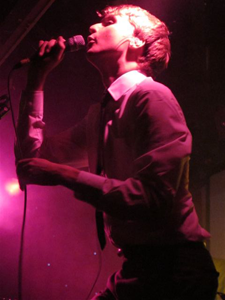 And in a sharply impressive but short set, they finish with the pure Vince Clarke-era DEPECHE MODE of ‘Searching In The Wilderness’ and the wonderfully melancholic grandeur of ‘Hide & Seek’.

It climaxes with the foursome leaving the stage to a repeated drum machine pattern just like ORCHESTRAL MANOEUVRES IN THE DARK used to do with ‘Enola Gay’.

Breathing new life into the classic ‘Synth Britannia’ blueprint, MIRRORS are synthly the best band to have come out of the UK for many years.

MIRRORS “are parallel to everything and equal to nothing.”