The Amazing Adventures Of MR NORMALL

April 1, 2011 / electricityclub / Comments Off on The Amazing Adventures Of MR NORMALL

A New Kind Of Man… 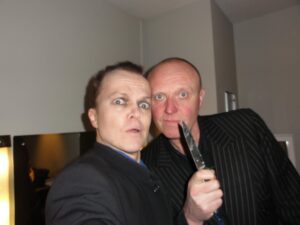 Those who have attended the recent concerts of ULTRAVOX, JOHN FOXX, HEAVEN 17 and Thomas Dolby may have noticed a striking satorially astute personality in the audience with the make-up and piercing eyes.

Looking like he’s just failed an audition to join SIGUE SIGUE SPUTNIK for dressing too smartly, that new kind of man is Tapio Normall, concert goer extroadinaire from Finland.

His trips seeing many of the artists from the classic synth and new wave era have been documented on his website The Amazing Adventures Of Mr Normall. His charming photographs with acts as KRAFTWERK, SPARKS, JAPAN, ULTRAVOX, GARY NUMAN, MARC ALMOND, THE HUMAN LEAGUE and VISAGE have become tales of electronic music folklore.

Just prior to visiting London again to see GARY NUMAN, JOHN FOXX, MOTOR and MIRRORS at Back To The Phuture, ELECTRICITYCLUB.CO.UK caught up with Mr Normall to reminisce about his travels and meetings with various lumanaries key to the rise of electronic pop music in Europe.

How did you come discover the joys of electronic and new wave music?

I remember that moment very well: I was 15 years old, it was summer and I was sitting in my parents’ car. The radio played ‘Computer World’ and few other tracks by KRAFTWERK. I knew right then that this is my kind of music. I had already tried punk and even a bit of rockabilly, but they weren’t my thing. The first vinyl album I ever bought was ‘Die Mensch Maschine’ by KRAFTWERK.

Who are your favourite acts?

What was your first concert?

A Finnish band called RATSIA. They started as a punk band but then moved towards new wave. When I saw RATSIA, they already had synth on stage and the guy who played it looked like a ‘rock’ version on Nick Rhodes.

The first non-Finnish band I saw live was CLASSIX NOUVEAUX. This was November 1982. 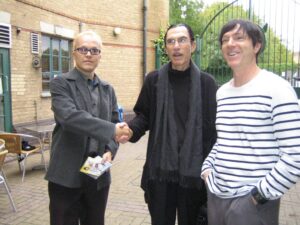 What inspired you to first journey abroad to see your favourite bands? It is because Finland is often missed out on touring schedules?

There were MARC ALMOND, SIGUE SIGUE SPUTNIK and DURAN DURAN gigs in London only a few days apart in December 2000. All my big favourites and no chance to see them in Finland. I’m glad that I went to see them because it was the only time I saw the Martin Degville, Tony James and Neal X version of SIGUE SIGUE SPUTNIK.

When did it occur to you that your travels were now becoming more than a habit?

I think that started summer 2006 when I went to London to see THOMAS DOLBY live at the Scala. The last few years have been like the second (or third or fourth) coming for many of my favourite artists/bands. This time has also been a sort of ‘second coming’ for Mr Normall. My passion for these things was almost lost during ’90s but it all started to come back after 2000 and it’s getting better and better. 2010 was great: THOMAS DOLBY, ULTRAVOX, JOHN FOXX, HEAVEN 17, MARC ALMOND.

You meet a lot of the people from the bands themselves and the ‘handshake’ photo with them has been a regular endearing feature of The Adventures Of Mr Normall. How do most of them react to meeting you, especially with your striking persona?

Heh heh… I believe all of them has seen more peculiar things than me! Actually everyone has been quite nice. Some artists have recognized me, which to me is a funny thing to notice. The internet makes things possible.

Often, you manage to get an invite to the aftershow party. How easy or difficult have you found to arrange this?

I have learnt one thing: it goes easy or it doesn’t go at all. Some aftershow passes I have asked, some have been offered to me and I’m very grateful for that.

Who have been your favourites stars to meet and why?

This question may lead to “Oscar speech syndrome” (just made that up) and I don’t know when to finish. I just leave it to that *laughs* 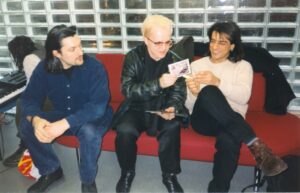 Tell me a funny story about one of your many meetings…

My idea was to go to the gig venue in the afternoon just in case we could see Karn and Jansen there. We went inside the venue, walked around and found Mick Karn, Steve Jansen and Robby Aceto in a small room and they obviously were just killing time waiting for the gig in the evening. They were apparently delighted that they got company and they were so very friendly. Mick Karn asked to show him from a map where we had come and he was astonished at how far north we had drove to Turku.

Before we left the venue – to return there later in the evening – they asked us tips what to do and where to go in Turku. We told them the best known sights there; Turku Castle and few others. It occurred to us later that maybe they actually wanted to go to the Turku city with us (I told them earlier I was there by car). They would have had both a local guide and ride back to venue with us, but we just weren’t able to read between lines. So we left Mick Karn, Steve Jansen and Robby Aceto where we found them and went to the city without them. If I had asked, maybe I would have had half of JAPAN on the backseat of my car.

We met Karn and Jansen again in the evening. There is a picture of Tuula, Steve Jansen, Marjaana, Mick Karn and I on my website. The picture is taken by Alice. She was actually the star of the evening but we forgot to take any pictures with her. I didn’t meet Mick Karn again after this. 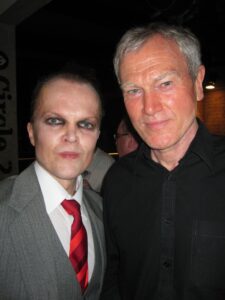 At The Blitz Club Reunion, I approached someone who I thought was Mark Shaw from THEN JERICO and it turned out it wasn’t? Have you ever had this embarrassment on your adventures?

Yes, but other way around. I’ve been mistaken for Billy Idol, Neal X – those were long time ago – and more recently for JohnFoxx. The latter was last summer on the day of John Foxx’s Roundhouse gig.

I was staying in Camden and at one point during the afternoon I left my hotel to go to a shop. I was wearing black ‘Glimmer – Best of John Foxx’ T-shirt, black trousers and virtually no make-up. Walking down the pavement I heard “Hey John!” but I didn’t realize it was meant for me.

Then a couple of blokes politely stopped me and asked if I could “sign these”. They had several John Foxx 12″ vinyls with them. As far as I can remember I said “yes I can but I think it’s better if JOHN FOXX does it, not me”. That was a good start for the John Foxx themed evening.

Was there anyone you met who perhaps wasn’t as friendly as you’d hoped?

No, not really. Ralf Hutter didn’t allow to have photos taken but he signed me several KRAFTWERK CD covers and chatted a bit. He is a gentleman.

So what do you think of the proverb that you should ‘never meet your heroes’? Can it ever go too far?

I suppose it depends what are your expectations and what you want. I haven’t had big disappointments but instead, the uplifting feeling after meeting an artist I have listened on the records and seen on the music videos since my teen years. That’s the story so far. 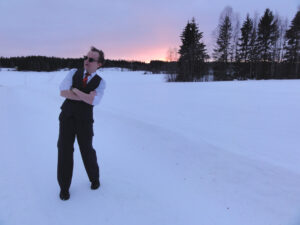 You have a friendly, engaging personality but do you ever worry you may be considered by some to be a stalker?

I hope not. To be honest, I don’t have enough interest in anyone particular for that. However, when I travel from Finland to London specially to see live an artist I haven’t met before, it’s not a big sacrifice to wait an hour outside the gig venue to possibly get a few photos taken for my website.

What are the options? Go back to the hotel, shopping, sight seeing, pub… actually a pub doesn’t sound too bad *laughs*

Is there anyone you would still like to meet and be photographed with?

Is there anyone from history or who is no longer with us who you would have like to have met and why?

Billy MacKenzie – in my book he was the best singer ever. Also meeting Andy Warhol would have been a big thing for me. 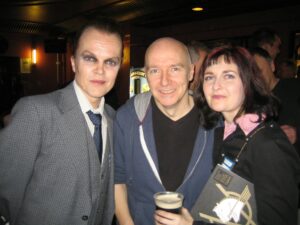 Favourite live concert of all time?

It’s too difficult to decide which one is my favourite concert ever. However, if I can expand this to a whole day including pre and after parties and the live concert, then I have the answer: it’s ULTRAVOX at Hammersmith Apollo in April 11th 2010. That was a great day.

Yes, I was there too, what a great gig! So who would you say is your favourite band of all time?

‘Gentlemen Take Polaroids’ by JAPAN. It is perfect.

ELECTRICITYCLUB.CO.UK gives its warmest thanks to Tapio Normall