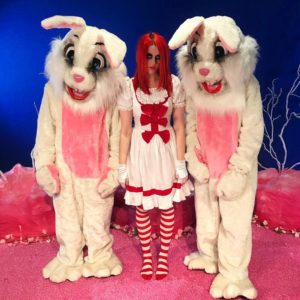 Now re-quoted by some other media outlets, that description appears to have stuck. With their second album ‘Scary World’

on the way, NIGHT CLUB have a mind bending visual accompaniment to go with its lead single ‘Candy Coated Suicide’.

‘Alice In Wonderland’ author Lewis Carroll had a disorder which caused him to have hallucinations about shrinking and chatting to anxious leporids, but what would he have made of this video to ‘Candy Coated Suicide’?

Described by singer Emily Kavanaugh as “like if an 8 year old and her stuffed animals discovered LSD and went on a solid 4 day bender”, the self-directed video sees her cavorting with two synth playing rabbits as well as a teddy bear with chains and cuffs being two of the prominent accessories.

However, the abundance of pitch shifted vocals ensures ‘Candy Coated Suicide’ possesses a slightly devilish quality, while instrumentalist and producer Mark Brooks has added a grittier rock dynamic that makes its presence felt in the bridge to compliment the dysfunctional pop aesthetic.

But while they are in the British Isles, NIGHT CLUB will also be headlining two August shows in Sheffield and London. 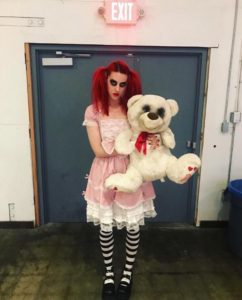