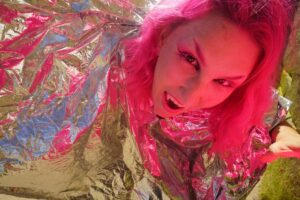 Having covered the DIVINE favourite from the John Walters film of the same name in the style of the ‘Jungle Jezebel’ album, DEVO, PEACHES and CRYSTAL CASTLES fan Lauren Lusardi was visiting the UK when ‘Female Fascination’ came together as a possible idea for a song about resilience.

“I spent a month in London staying with my grandma and she inspired me to write the song” she said, “The lyrics ‘Guess I needed more than a vacation since you’ve got a female fascination’ tell her tale of divorce in a time where it was very looked down upon. When she told me her story, I felt it was my duty to write her soundtrack.”

The grainy split screen video for ‘Female Fascination’ features some classic horror references: “Director Bobby Jauregui had the idea to use split screens to mimic the phone frame we see in our every day lives. We took a lot of inspiration from Brian Depalma (‘Scarface’ and ‘Carrie’), Christopher Nolan (Dark Knight & Memento), Texas chainsaw massacre, Italian horror from the 60’s and 70’s, and a bit of Tim burton to top it all off. Bobby had also been watching lots of Wanda vision and ‘The Queen’s Gambit’ while editing the video. In general, it’s an homage to the use of split screen in film and TV.”

Shooting the video presented its own challenges: “The street shots were tricky especially in the pandemic. The hardest was the fashion district because all the people around. My favorite most difficult location was the burned down abandoned house. I got a little too into character and the neighbors threatened to call the cops. Oops!”

But eventually, the shoot was able to be completed: “Bobby managed to find newly vacant apartments in Orange County that we were able to film in front of in peace. I loved this location because they looked like movie set houses / something you would see on studio lot. We did this with zero budget and 100% creativity.”

ELECTRICITYCLUB.CO.UK gives its warmest thanks to PLASMIC

Posted in Reviews Tagged with Plasmic