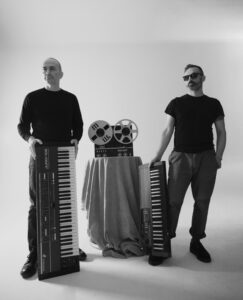 Fred Ventura is a legend of Italo Disco; meanwhile Paolo Gozzetti is a stalwart of Italian electronic music. Together they are ITALOCONNECTION.

As well as songs about love, ‘Midnight Confessions Vol1’ also brings in a wider commentary including environmental issues, the worldwide pandemic and human rights.

Fred Ventura and Paolo Gozzetti spoke to ELECTRICITYCLUB.CO.UK about their latest adventure as ITALOCONNECTION and to make some midnight confessions…

The new ITALOCONNECTION album is called ‘Midnight Confessions Vol1’, had there been any conceptual intention musically?

Paolo: When we started to work on this new album, we wanted it to be deep, nighty and sophisticated. We wanted to create a story through the lens of our vision creating some kind of metaphysical perspective of the dancefloor. Not a direct, but a more reflective and mediated approach.

Fred: The production of this album was like a long journey, going through bad weather and back to the sun several times. We had to face the reality of working from distance and without the usual production jam we used before the pandemic 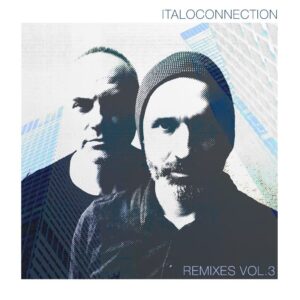 Did the concept include the synths you were using, where there any self-imposed restrictions on the palette of sounds used to achieve your aims?

Paolo: Our aim is always to sound vintage in a modern way. So yes, we used a certain number of selected synths and drums, but we like to work on it to make it sound somehow unique and up to date. We love to start from a palette and tweak with knobs, filters and effects to achieve sounds that suit that particular song in a “sensual” way.

Fred: I love the freedom to be able to work with sounds we like, instead of following a dogma or being stuck in the past or obsessed by new technology.

How would you describe your creative dynamic as ITALOCONNECTION?

Paolo: We come from a common ground and we share a lot of passions varying from musical acts to artistic imaginaries. When we work together, we are very fast on revealing where a track could lead us to. We usually start tweaking and then something happens. It could be a bassline that reminds some particular song or artist, or a melody or harmony that makes us unveil where the song could go. This is very special and it works because we know each other very well and love what we do.

Fred: The good thing is that we never follow any rule, we know our background and we exactly know where we want to bring the ITALOCONNECTION sound.

ITALOCONNECTION have been busy with productions and remixes, do you have a favourite from the recent batch of work?

Paolo: Remixes are like a gym where you can play and practise different things you wouldn’t normally do with the strain of production. It’s fun because you are free, and forced to work on a different pattern and this can be stimulating. We had great fun remixing Etienne Daho and recently Josep Xortó & The Congosound and Rago e Farina. Productions are a totally different playground because you have to translate the artist’s idea into something that reflects both his and your vision. We had massive satisfaction working on the album of La Prohibida.

Fred: It’s a nice feeling to work for other artists because you experience a different involvement, less personal but with a strong focus so to reach a result that make all the people involved happy. 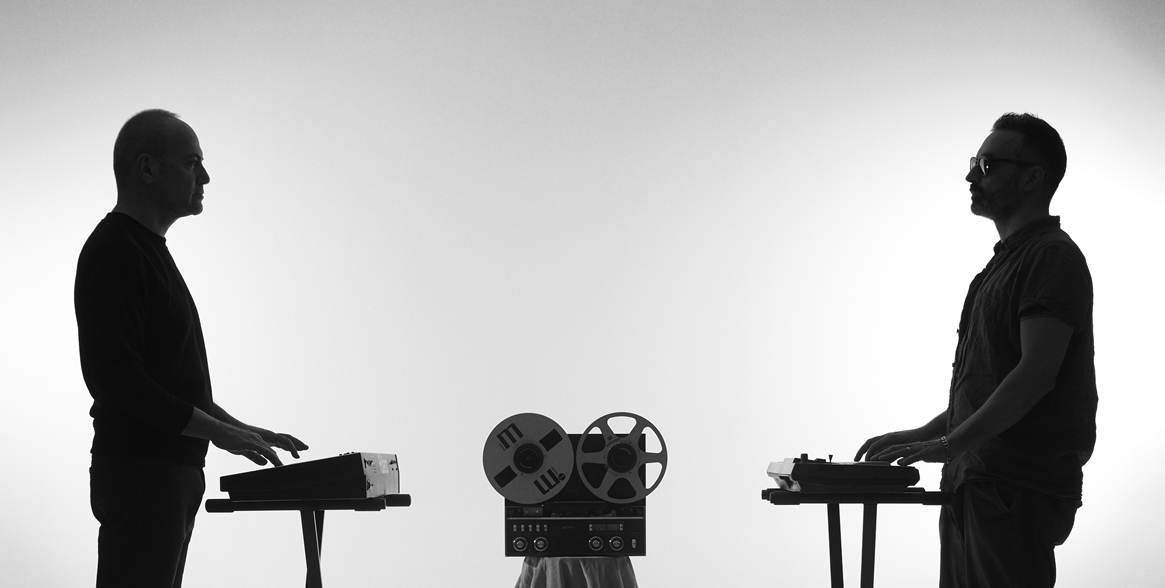 How do you look back now on your previous album ‘Metropoli’ and the covers collection ‘Disco Boutique’?

Paolo: Yesterday I had the chance to listen to ‘Metropoli’ for the first time in ages, and I had a “detached” listen, while before I was always too much involved and critical. I must admit it still sounds timeless and focused. It clearly shouts for urgency and character and sounds monolithic and big. It is almost a sound manifesto and I still love it. We wanted to take a picture of our imaginary. ‘Metropoli’ is an interpretation of what we felt and saw when playing in Berlin, London, Paris, Helsinki. A ‘Metropoli’ of sound, in a European vision.

Fred: In a way ‘Metropoli’ is a collection of images, we always bring back good memories and images from our touring that sooner or later end up influencing the atmosphere and lyrics of the songs

Paolo: ‘Disco Boutique’ is a tribute to some of the most iconic or obscure tracks that somehow inspired us over the years, remixed with our feeling and sound. This project is both fun to make and useful to have because we wanted to give a layer of fresh paint to songs that would sound somehow dated or unfamiliar to many. This is an open project, we don’t exclude, we could work on new ‘Disco Boutique’ material in the future. 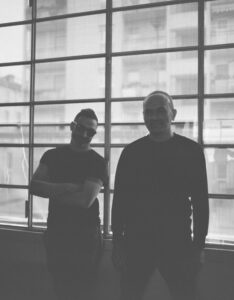 Talking of covers, you recorded a version of THE ELECTRONIC CIRCUS’ ‘Direct Lines’ in 2017 with Francesca Gastaldi, how did you discover the song as it is quite obscure, even in the UK?

Paolo: The story behind ‘Direct Lines’ is peculiar. I listened to it in a skate documentary and I had the impression I already heard it before. I loved it since the first riff, which goes directly to the point and captures that new wave spleen immediately. Then I discovered that this song was written by Chris Payne who played with Gary Numan and co-wrote VISAGE ‘Fade To Grey’ so all the elements of the puzzle made sense immediately. There is this long rope of tension that bends all the people that were involved in the new wave and post-punk environment together. And yes, I am definitely a “Blitz Kid”!

You opted to have a number of special guests on ‘Midnight Confessions Vol1’, what was the idea behind this?

Paolo: ITALOCONNECTION is a duo, and at the same time an open project (hence the name “connection”). We want to be a bridge to collaborations with people we admire and respect. We love to create connections and listen to how artists translate our vision. We had guests also in ‘Metropoli’. We love to have guests.

How did you meet French superstar Etienne Daho to make ‘Virus X’, that title is a very relevant subject? 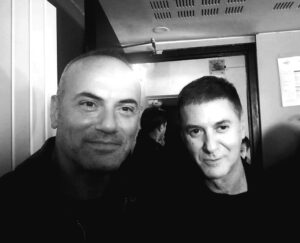 Fred: I had the chance to meet Etienne Daho at the after party of French iconic new wave band MARQUIS DE SADE reunion concert in Rennes a few years ago. I’ve been a big fan of him for more than 35 years and this collaboration is a real dream come true.

Paolo: When we approached Etienne we wanted him to have the broadest freedom on the interpretation of the song. We were stunned by the song melody itself and the inspiring lyrics. He made this clever comparison between a toxic relationship and a virus, which is actually very true.

‘All I Want Is You’, ‘All Over’ and ‘Get Together’ feature some very confident and rousing vocal performances, but how did you decide which songs were sung by yourselves and which were sung by the guests?

Paolo: Fred is very confident with the potentialities of the songs he chooses he could sing in. and he is very good at finding a melody that works. Sometimes songs come up already with a melody and we feel they could be perfect for some artist we love. Other times we just have an instrumental song and we want to challenge some of our artist friends to find and sing a new melody for us. There is no rule here. It’s just fun and we are very focused on the songs we are working on. For example: ‘Year Of The Sun’ was perfect for the mood and the key of CARINO CAT, and we decided it was the case.

Fred: I’m definitely more than happy sometimes to leave the lead vocal role to other artists that we both respect, it is also a way to make our sound more interesting and international 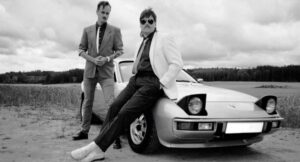 ‘Year Of The Sun’ with CARINO CAT has a great nostalgic feel that parties like it’s 1985?

Paolo: There are “waves” of inspiration during times where we write in a certain style of music. In this case, we had a grape of songs that were very nostalgic and 80s in a ‘Donna Rouge’ style. So we thought that CARINO CAT were perfect for that particular song.

Fred: I’m still so proud of releasing their debut album on my label Disco Modernism, they are very talented and real, and most of all great songwriters

Paolo: Yes exactly, but not only. It’s a tribute to people that stand up for rights. We are always up for human rights and peoples rights in general.

A feminine element is brought to ‘Since You Went Away’ by Francesca Diprima, has this song been inspired by real life events?

Paolo: Not really; you have to think that when in the studio, we play a lot with imagination. This song is like a film, inspired by the music. And we pictured ourselves in a 1981 rainy and windy Paris at Montparnasse, searching for the lost love. Francesca Diprima is the connection with the loved one, ideally a telephone call in the storm, a retro-modern drama.

Fred: I’m pretty fascinated by this feeling of loneliness you feel when you are left by somebody and you are wandering in a big city, among buildings and lights under the rain

The album ends more introspectively with ‘Humans’, what is your message here?

Paolo: The point of this song sounds like it may have a direct connection with the recent age of pandemic, which may be true, but could be applied to a wider spectrum of our relationships. We are humans, we need to relate, we were made to relate. You can hide, you can escape, but the truth is we all need to relate.

Fred: The lack of physical contacts of the last 15 months made me realise how I miss shaking hands and holding people you are close with. The eyes connection is not enough, unfortunately

Which are your own personal favourite songs on ‘Midnight Confessions Vol1’?

Paolo: It is very difficult to make a choice. Every song hides a story and a long development. Every song is a confession.

Fred: I don’t have a proper favourite one but ‘Virus X’ definitely represents a reached goal and an emotional moment 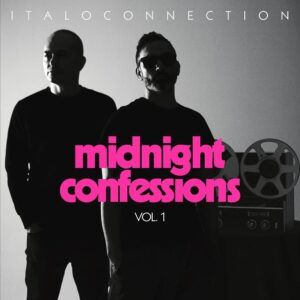 The production on ‘Midnight Confessions Vol1’ is superb, very clear and spacious yet powerful. Have you any thoughts about how modern music production is heading now and the harsh sound that some acts are adopting, like on DURAN DURAN’s ‘Invisible’ for example?

Paolo: Being a musician, a sound engineer and synth lover with a fetish for “that” sensual sound, makes it automatic to think of an album as a whole. A unique piece of art made of music, sound, melodies and words with a precise image and vision in the background. We are very careful at sounding good.

We don’t want to sound harsh. We rather prefer to sound big and enveloping. To achieve this, we always want to have complete control over every aspect and stage of production. We think of an album as a piece of art, be it a film or a painting. Something that remains over the years.

The title ‘Midnight Confessions Vol1’ indicates there will be more music in this style, what is next for ITALOCONNECTION?

Paolo: ‘Midnight Confessions Vol1’ is the first volume of a wider collection of songs. We had too many for a single album, so expect it to be part of a big selection of ‘confessions’.

Fred: Yes, we still have a lot of ‘confessions’ to reveal.

‘Midnight Confessions Vol1’ is released by Bordello A Parigi on 21st June 2021, the vinyl LP and CD are available direct from https://bordelloaparigi.com/artist/italoconnection/