POLLY SCATTERGOOD Live At The Workshop

February 9, 2014 / electricityclub / Comments Off on POLLY SCATTERGOOD Live At The Workshop 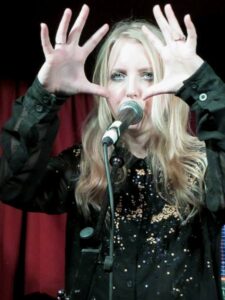 The intimate surroundings of The Workshop in London was the venue for emerging Mute artist Polly Scattergood.

Polly Scattergood released her debut self-titled debut album in 2009 to great critical acclaim. Her guest spot on BEF’s 2012 covers LP ‘Music Of Quality & Distinction – Dark’ singing the Bacharach and David classic ‘The Look Of Love’ also exhibited her versatility as a interpreter as well as a songwriter.

With influences such as BJÖRK and COCTEAU TWINS, her promising sound has undergone a natural progression for its grower of a follow-up ‘Arrows’. Taking on more synthetic textures but retaining her kooky, affected vocals, the brilliant ‘Cocoon’ and ‘Falling’ initiated proceedings.

With her charming banter and enigmatic oddness, Scattergood came over like a cross between Sarah Brightman and Sally Thomsett from ‘Man About The House’. Swigging from her brandy bottle for ‘medicinal purposes’, she very much endeared herself to everyone present.

‘Subsequently Lost’ almost stole the show with its accessible NEW ORDER drive and an air of fragility. A vocodered double track provided a chilling schizophrenic feel. ‘Disco Damaged Kid’ was another enticing casualty ditty that successfully merged Norfolk with Berlin! With the horrendous rainy winter the UK was having as the backdrop, the ‘Arrows’ material now made total sense. However, when Scattergood opted for her starker, more esoteric compositions like ‘Colours Colliding’ and ‘Machines’, it did appear to bemuse the club inclined regulars in attendance while the crowd who were there for her were totally mesmerised. 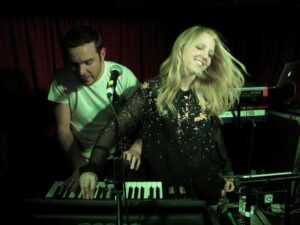 On the passionate and stripped bared ‘Miss You’, the totally bonkers Polly’s stage persona really let rip. Despite her traumas in Polly World, everyone is rooting for her and this is her trump card!

When the set concluded with the deliciously wired avant pop of ‘Wanderlust’, live keyboardist Glenn Kerrigan joined Scattergood at her Moog Little Phatty for a magnificent sweeping and swirly climax. Scattergood gave a wonderfully passionate performance that exposed a captivating vulnerability.

As an artist marked out the vein of Elizabeth Frasier and Alison Goldfrapp, luckily she is on a label that will let her persue artistic aspirations rather than sales. Her career trajectory can only ascend; it should be a cracking third or fourth album…

‘Arrows’ is released by Mute Artists