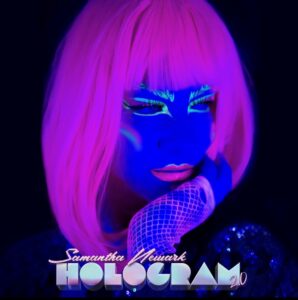 Samantha Newark is best known for her voice-over animation work for the cult classic cartoon series ‘Jem & The Holograms’. It told the story of a record company owner Jerrica Benton and her singing alter-ego Jem’s adventures in the music industry.

Although ‘Jem & The Holograms’ ended in 1988 after three seasons, the show became one of the main influences of Texan bionic bubblepunk duo HYPERBUBBLE. The married couple of Jess and Jeff DeCuir have over a series of albums and EPs since 2004 explored instrumental synth, electro country and western, pop, cover versions and soundtracks.

But for their remix of Samantha Newark’s ‘Hologram’, it is as if an artistic circle has been completed. While ‘Hologram’ originally came out as a rock ballad with piano and guitar in 2017, HYPERBUBBLE reworked the song using just the vocal stem in their own uptempo avant disco style while complimenting her superbly rousing vocal.

Although the magenta lit lyric video could be anything from the synthwave community over the past 10 years, the digital modelling is of a very high standard and suits HYPERBUBBLE’s take on ‘Hologram’ without selling its soul to Ryan Gosling.

Having moved to Nashville and released her self-titled debut album in 2008, Samantha Newark’s new album of remixes ‘Hologram 2.0’ presents a dance music version of the original ‘Hologram’ album which began as a concept album about Jem,

A love letter to the many Jem fans, Samantha Newark said “Get ready for a non-stop dance music party that reimagines the original ‘Hologram’ album into a truly outrageous dance floor of glitter and gold extravaganza”.

‘Hologram 2.0’ is available as a CD and double pink vinyl LP from https://www.samanthanewark.com/store