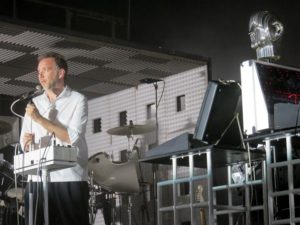 Before Belgium’s SOULWAX even played a note tonight at Manchester Ritz, the stage set was a synthspotter’s wet dream.

A beautifully monochromatic and almost perfectly symmetrical set-up boasting an incredible array of mainly vintage equipment including an EMS Synthi A, ARP 2600 (with custom red LEDs on the sliders), ARP Odyssey, Oberheim 2 Voice and a Macbeth modular being amongst the gear on display.

It was plain from the off that this wasn’t going to be a low budget laptop-prodding live experience and that’s without mentioning the three drum kits! Two out of the three kits were Staccato ones; these unique looking drum sets (which have brilliantly been compared to ‘Humpty Dumpty’s shorts’ due to their flared-out look) were an essential tonight to help perform tracks from SOULWAX’s current opus ‘From Deewee’ which features three different percussionists.

What was also noticeable was the white acoustic tiling which lined the interior of the triple drum cages; in a nod to KRAFTWERK, the aesthetic of these recalled the clinical look of the German synth maestro’s Kling Klang studio soundproofing.

Opening with the instrumental overture ‘Preset Tense’ from the current album, the rippling synth arpeggios rose to an electronic crescendo before launching into ‘Masterplanned’ and the dropping of covers to reveal the three drummers; stage left and right and one behind the Dewaele brothers. Recalling the drama that used to accompany the imperial phase of DEPECHE MODE’s classic live shows, it was an undeniably stunning start to tonight’s show. 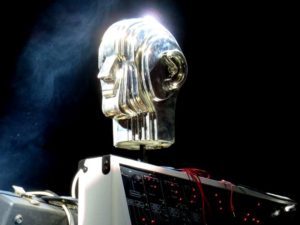 The majority of the night’s set was made of selections from the ‘From Deewee’ album with a few choice tracks from the SOULWAX back catalogue including ‘Krack’ and ‘Another Excuse’.

During ‘NY Excuse’, a metallic replica of the piston shaped robotic figure from the cover of ‘From Deewee’ rotated whilst being hit by a beam of white light as the song’s mantra-like quality took hold.

As the song hit its climax, Stephen Dewaele coaxed screaming lead synth sounds out of his ARP2600 and the track provided an undisputed highlight of the night’s show. Throughout the night, whilst many in the audience bounced up and down, others were transfixed by the spectacle of watching live electronics with three live drummers perfectly in synchronization.

For those that have witnessed the SOULWAX live experience before, their shows are presented in a breathless continuous mix format, with songs segued into each other, helping to maintain the club / dance vibe of most of their material. 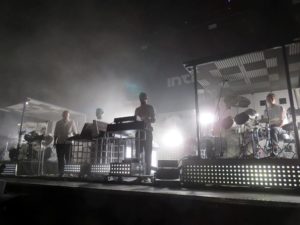 Maintaining the monochromatic theme, piercing white lights positioned at strategic points on the stage were perfectly synced and triggered via the band’s Ableton software during the show.

After approximately an hour and half’s worth of performance, the band took a short break and then came back for an encore including a supercharged version of ‘Miserable Girl’ to climax the evening.

If a criticism could be levelled at the show it would be that it was maybe a little too heavily skewed towards the material from ‘From Deewee’ at the expense of some of the band’s stronger back catalogue. But considering the logistics of bringing three drummers, it made musical sense to bias towards these more recent songs as the featured musicians played such a big part in the creation of them. 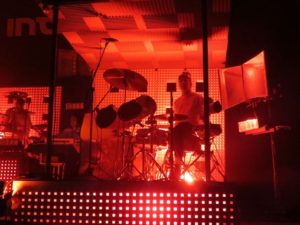 What was ultimately refreshing about tonight was that there are still bands that are willing to take musical risks in the live arena and put on a show that was undoubtedly a major technical nightmare to stage and one that could possibly be a money-loser considering the amount of performers / equipment involved.

If you do get a chance to catch SOULWAX live or even their 2MANYDJS incarnation, don’t miss out on the chance.

This is about as far away from what some electronic / synth bands consider a live show… perfect symmetry indeed.

is released by PIAS in the usual formats