April 8, 2013 / electricityclub / Comments Off on SUDDEN CREATION Shouldn’t I Be A Girl? 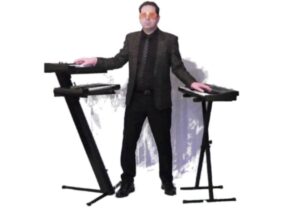 Possibly the UK’s answer to MAISON VAGUE, Mines has described his sound as “Love, Death and middle-aged angst in three and a half minutes of synthpop…”; Certainly song titles such as ‘I’ve Never Met Vince Clarke’ and ‘Machine Man’ indicate a wry tongue-in-cheek demeanour gleefully gained by observing the electronic music scene from its fledgling Synth Britannia stages.

And none more so than with a track which Mines says was inspired by ELECTRICITYCLUB.CO.UK! Entitled ‘Shouldn’t I Be A Girl?’, it gives an ironic commentary of the synthpop renaissance over the last five years… on paper, it seems perfect for many aspiring electronic musicians until the realisation dawns that most of the press coverage has been centred on female acts…

Using a 2009 quote that was made by this writer following the publication of Caroline Sullivan’s now prophetic article in The Guardian entitled ‘Slaves To Synth’, while ELECTRICITYCLUB.CO.UK can neither confirm or deny any gender bias, the self-produced promo video ‘Shouldn’t I Be A Girl?’ amusingly captures that moment in time when synth girls ruled the world! However, with new albums by LITTLE BOOTS and LA ROUX seemingly rumoured to be less than synthy, maybe it’s now time for the boys to extract their revenge?

‘The Video EP’ is available as a CD now from www.suddencreation.co.uk