While GARY NUMAN has a much publicised new album ‘Savage’ in the works funded via Pledge Music, a number of collaborations with key figures like JOHN FOXX and JEAN-MICHEL JARRE were unleashed in 2016. 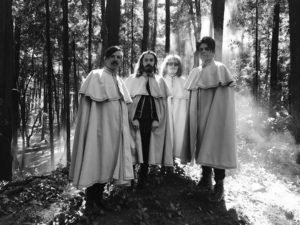 But one of the best was with Mexican electro rockers TITÁN. The resultant track ‘Dark Rain’

was a brilliant slice of electronically assisted Gothic disco.

Propelled by a superb syncopated bassline and thunderous drums while layered with classic vox humana lines, interestingly the guitars on appear about two thirds of the way through before a magnificent burst of foreboding synth into the final chorus!

Numan himself is in good form, with calls that he’s “waking like wings upon your shoulder”. A new video directed by Gabriel Govela featuring all parties has been made and suitably rings the doom laden nature of the title, with Numan and friends bearing witness to the unsettling exorcism of a possessed woman.

‘Dark Rain’ comes from TITÁN’s well-received fourth album ‘Dama’, their first in a decade. As well as Numan, the album also features Siobhan Fahey of SHAKESPEAR’S SISTER and BANANARAMA fame on a number entitled ‘Hell.A’ which comes over a bit like a vampire themed variation of GINA X PERFORMANCE’s ‘Nice Mover’.

Meanwhile, songs with working titles of ‘If I Said’, ‘Mercy’, ‘I Heard A Voice’, ‘Bed Of Thorns’ and ‘My Name Is Ruin’ have been taking shape on GARY NUMAN’s new album, which is due out in Autumn 2017 on BMG and supported by a tour. He also recently received the Ivor Novello Inspiration Award for songwriting.

is from TITÁN’s album ‘Dama’

Details of GARY NUMAN’s Pledge Music campaign for ‘Savage’ can be found at http://www.pledgemusic.com/projects/garynuman 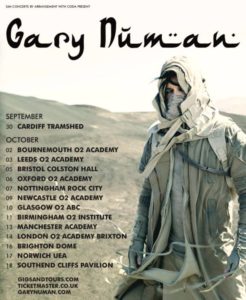