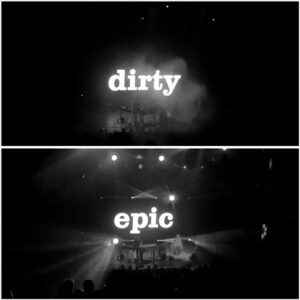 “…and the light it burns my eyes. And I feel so dirty. Here comes Christ on crutches!”

Rewind back to 1994 and the charts were packed to the rafters with Eurodance…WHIGFIELD, CORONA, SNAP, HADDAWAY, CULTURE BEAT, 2 UNLIMITED… the list was pretty endless. So when an album of so-called “intelligent” dance music with stream of consciousness lyrics referencing Romford and Chigwell came out, the chances of it being much of a success seemed scarce. Yet, twenty years on and UNDERWORLD’s ‘Dubnobasswithmyheadman’ is rightly cited as a classic not just of the dance genre, but also electronic music in general.

Its broad spectrum of music from epic four-to-the-floor through to downtempo more reflective styles meant that UNDERWORLD, alongside LEFTFIELD, ORBITAL and THE CHEMICAL BROTHERS were able to push the buttons not just for dance music fans, but also for followers of electro and synthpop. After a testing the water one-off show at The Royal Festival Hall in London rapidly sold out, the following tour dates did the same and this was evidenced by a packed Hammersmith Apollo.

The album itself is pretty perfectly sequenced, and it would have been nonsensical to mess with the track order, ‘Dark & Long’ starting the set as per the album, with minimalistic, Tomato-styled visuals of the song titles being projected in a variety of font sizes behind the band. Due to not having the best seat in the house, it only became apparent a couple of tracks in that remaining founder member Rick Smith was absent, frontman Karl Hyde eventually confirming that he was ill and that long term collaborator Darren Pierce would be fulfilling / covering his role on stage.

This provided the evening with its KRAFTWERK moment, the realisation sinking in that Hyde (at that point in time) was the only remaining member from the line-up that made the album (DJ Darren Emerson is no longer part of the group anymore).

Once the set progressed, the initial disappointment gradually faded as tracks such as a 15 minute long ‘Mmm…Skyscraper I Love You’ helped turn the Apollo into a multi-tiered club, people abandoning their seats and some throwing dance shapes and reliving memories of both the album and formative UNDERWORLD tours.

The tracks themselves were pretty faithful reconstructions of the original album versions, which went against the improvisational ways that they would have been delivered back in the day, when the band (apparently) played live without rehearsing or having a setlist to follow. 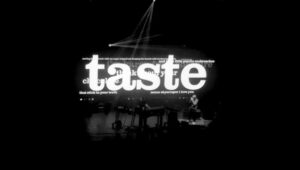 ‘Dirty Epic’ was a highpoint, reminding that a large part of UNDERWORLD’s sound relied on Hyde’s deeply personal lyrics and guitar playing, much of the former stemming from anecdotal stories from living and working in both New York, Minneapolis and, erm, Romford. Once the album performance was concluded with ‘M.E.’, the crowd was treated to renditions of the single ‘Rez’ and LEMON INTERRUPT B-side ‘Big Mouth’.

Both tracks literally raised the Apollo roof, the former spinning and stretching out the resonating synth riff for what seemed like ages before the drums kicked in. ‘Big Mouth’ was a sort of alter-ego to THE GRID’s ‘Swamp Thing’ as was an earlier rendition of ‘Cowgirl’, both taking country-style riffs and setting them in a dance context, Hyde’s harmonica playing receiving a rapturous reception at the end.

The tracks played throughout also reminded the listener that although aligned with dance music, they never, ever resorted to the cliché, eg the long, extended TR909 snare roll or daft, hedonistic “Move Your Body!” lyric, and it is this that has helped contribute to giving ‘Dubnobasswithmyheadman’ its longevity. 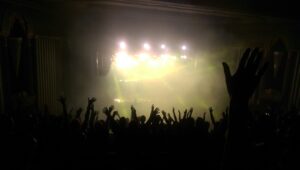 There was only going to be one way to climax the show and that was with the Bill Bailey inspired ‘Born Slippy (Nuxx)’ (Google it!), the PA seemed to raise a notch as the track’s thundering kick drum and accompanying rave-style lighting sent the Apollo crowd home on a high. Downsides?

Due the length of most of the tracks played, there was no room for the single ‘Two Months Off’ and the evening did prompt the usual question posed during an electronic show of “what is exactly being played live on stage?”.

These quibbles aside though, tonight reinforced how important ‘Dubnobasswithmyheadman’ is as a landmark electronic album and when its contemporaries have long since faded will live on as a classic of its kind.

‘Dubnobasswithmyheadman’ is available as a deluxe 2CD, vinyl double LP and deluxe download via Commercial Marketing