March 12, 2015 / electricityclub / Comments Off on Lost Albums: VISAGE The Anvil 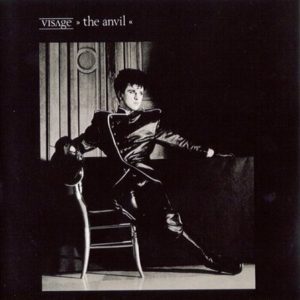 By the time that VISAGE’s second album ‘The Anvil’ came out in Spring 1982, things were very different for the cast who had produced the eponymous debut started in 1979, and which in early 1981 spawned the massive European hit ‘Fade To Grey’.

Midge Ure had accepted Billy Currie’s invitation to join ULTRAVOX and were now riding hide internationally thanks to the success of ‘Vienna’; sax playing guitarist John McGeoch left both VISAGE and MAGAZINE, and was now a member of SIOUXSIE & THE BANSHEES; keyboards man Dave Formula though remained in the Manchester post-punk combo.

Meanwhile, thanks to the success of ‘A Club For Heroes’ at The Blitz in Covent Garden and Barracuda on Baker Street, Rusty Egan and Steve Strange were about to embark on their biggest venture yet with the Camden Palace. Strange, in particular had become a bona fide celebrity and was being snapped by Paparazzi hanging out with the likes of Jack Nicholson, Elton John, Diana Dors, Marianne Faithful and Jerry Hall.

In many respects, it was unsurprising that ‘The Anvil’ appeared to lack the focus of its predecessor, but it was still a very good record. The synthesized European romanticism that had dominated the ‘Visage’ debut was omnipresent, especially with the lavish monochromatic Helmut Newton cover photograph. But a funkier perspective had been introduced to proceedings, thanks to Strange and Egan’s growing interest in the new funk forms that had been emerging in clubland, particularly from New York. 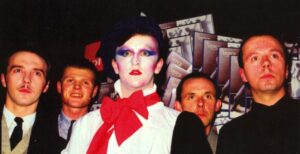 It was a direction that had been indicated on ‘We Move’, the B-side to ‘Mind Of A Toy’ and in order to authentic things further, there had been talk of ROXY MUSIC bassist Gary Tibbs joining, but he was then head hunted by ADAM & THE ANTS. Instead, original VISAGE bassist Barry Adamson rejoined, but this time as a hired hand and his subsequent contribution to half of the album was to have a profound effect.

The funkier direction also allowed Midge Ure to indulge in techniques and styles he would have never got away with in ULTRAVOX. But while VISAGE had been started in 1978 by himself and Rusty Egan as a project to make up for the shortage of suitable Euro styled electronic dance music in the clubs, he had not been naturally schooled in funk the way Rusty Egan had been as a soul boy. While the genre blend was to produce some fabulous music, the continuing musical differences would subsequently lead to a fallout between the two friends.

To the public at least, it was business as usual with the album’s launch single ‘The Damned Don’t Cry’. Very much in the vein of ‘Fade To Grey’, it was set to a drum machine syncopated by Rusty Egan’s percussive mantra while Billy Currie’s piano and ARP Odyssey made its presence felt in the solo. And reprising the prominent female vocals that featured on ‘Fade To Grey’, ex-HOT GOSSIP members Perry Lister (Mrs Billy Idol) and Lorraine Whitmarsh added their own wispy feminine touch, as they were to do throughout the album alongside backing vocals from Ure and Egan. 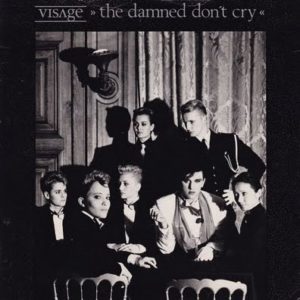 While ‘The Damned Don’t Cry’ delivered what was expected, the harder edged, Teutonic salvo of ‘The Anvil’ almost certainly was not. Featuring some superb guitar work from Midge Ure and metronomic drumming courtesy of Rusty Egan minus his hi-hats, it was Steve Strange’s tale of a night out in New York’s notorious gay club of the same name.

Billy Currie’s superb screaming ARP Odyssey and Dave Formula’s brassy synth riff completed the industrial revolution. It had been intended as the album’s first single and a German version ‘Der Amboss’ had already been recorded as one of the bonuses.

Rusty Egan said: “For me, ‘The Anvil’ was the lead track, ‘The Anvil’ in German (‘Der Amboss’), the 12-inch remixes… but the record company didn’t support that! They were pushing for another ‘Fade To Grey’ so they were going for ‘The Damned Don’t Cry’!” While, Polydor were not so keen to use ‘The Anvil’ as a launch pad, DIE KRUPPS’ subsequent electro metal cover in 2007 proved belatedly how seminal the track actually was!

While the following ‘Move Up’ with its hard bass sequence developed on the title track, it suffered being sat next to it, but that set the scene for the rather bizarre but enjoyable sonic sandwich of ‘Night Train’. With Dave Formula’s wobbling, detuned synth line bouncing off Barry Adamson’s bass and Gary Barnacle’s squawking sax, the funky overtones augmented by Rusty Egan’s drumming were then counterpointed by an ULTRAVOX styled piano and violin passage in the middle eight. 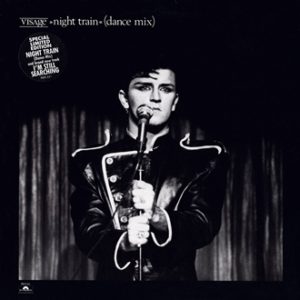 While the elements all provided a marvellous musical excursion, Ure’s final production was perhaps not direct enough for the American club market that Egan and Strange now coveted. Ure said to Smash Hits at the time: “During the last album I kept hearing phrases like ‘commercial’ and ‘appealing to the American market’. I don’t like the ‘American market’ much”!

So when ‘Night Train’ was remixed for single release in Summer 1982 by noted American disco producer John Luongo at the instigation of Egan, it spelt the end of the diminutive Glaswegian’s association with VISAGE. “I didn’t like it” he simply said.

Despite an impressive first side, even better was to come on side two with some real lost masterpieces in amongst the throng. First up was the ULTRAVOX meets CHIC hybrid of ‘The Horseman’. It certainly was interesting to hear Midge Ure aping Nile Rodgers, albeit using his distinctive flanged guitar style rather than a more traditional fluid rhythm slice.

And with Ure’s backing vocals so prominent in the mix of ‘The Horseman’, especially in the middle eight, it was almost an ULTRAVOX song in all but name. While Steve Strange’s characteristic, but occasionally dispassionate lead voice was an essential part of VISAGE’s identity, it was Ure’s input that provided the credible vocal musicality, as proven by Strange’s hopeless, undirected vocals that were on evident 1984’s disastrous Ure-less VISAGE album ‘Beat Boy’.

‘Look What They’ve Done’ was a dramatic slice of neu romance, and it was on songs like these where Steve Strange’s less tutored vocals came to the fore, suiting a colder electronic backdrop more than the misguided adventures into rock which came later.

But with the glorious ‘Again We Love’, every aspect of VISAGE’s collective talents clicked in unison, both vocally and instrumentally. From the dramatic start and the eerie, atmospheric melancholy to the stupendous percussive climax and echoey fade, ‘Again We Love’ summed up what VISAGE was all about. Yes, they were the New Romantic supergroup and were a formidable combination when firing on all cylinders. And it was this song on ‘The Anvil’ that probably got closest to recapturing the grandeur of ‘Fade To Grey’.

With that impressive trio of songs, the album took a slight dive with ‘Wild Life’. This was disappointing as the B-sides of the album’s two singles, the metronomic instrumental ‘Motivation’ and the proto-PET SHOP BOYS of ‘I’m Still Searching’, were far superior. Typically the type of rushed filler that adorned most albums of the day, ‘Wild Life’ sounded like several musical idea fragments gaffer taped together with a middle section that had Rusty Egan impersonating BOW WOW WOW! It had no proper lyric to speak of either but thankfully, victory was snatched from defeat with the beautiful, dreamy ambience of ‘Whispers’.

Featuring Perry Lister and Lorraine Whitmarsh surreally conversing like five year old girls over a hypnotic piano motif, the track’s chilling shimmers and sad synth replies were interrupted halfway through by a simple, heartfelt melody over a stark funereal beat. Its enigmatic use on a TDK TV advert featuring Steve Strange actually got it a single release in Japan. And ironically, despite Strange not appearing on the track itself, ‘Whispers’ has now sadly gained further poignancy and resonance in light of his passing on 12th February 2015.

‘The Anvil’ is possibly the most under rated album of that Synth Britannia / New Romantic period. Although it went silver in the UK and reached No6 in the album chart, it never got the artistic acclaim it deserved, no doubt overshadowed by the accomplishments of ULTRAVOX, JAPAN, DURAN DURAN, ASSOCIATES and SIMPLE MINDS at the time. While not as consistent as  VISAGE’s debut, there are certainly a number of songs on ‘The Anvil’ that are among the best of the era and truly merit reinvestigation.