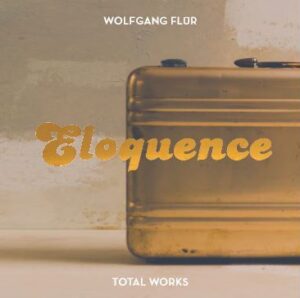 For anyone that has followed the post-KRAFTWERK career of WOLFGANG FLÜR, it is apparent that on the surface, the man himself isn’t overly concerned about how his music and his persona is perceived.

An individual in his or her position is rightly able to rest on their laurels knowing that their place in musical history is comfortably assured.

This attitude was clearly in evidence for those who in January witnessed Flür at a sold out London show and were treated to an hour DJ set comprised mainly of faceless techno tracks, including only a single KRAFTWERK remix and the surreal spectacle of Herr Flür marching up and down the stage wearing a WWI Pickelhaube helmet.

‘Eloquence – Complete Works’ is a compilation that rounds up the pick of solo tracks, collaborations and remixes recorded since 2002. It neatly complements Flür’s live persona in that it is unpredictable and throws in several curveballs for those expecting re-treads of the classic KRAFTWERK sound.

Anybody that has read ‘I Was A Robot’ will be acutely aware of Flür’s experience and struggles of being part of the KRAFTWERK maschine and this album catalogues a variety of styles, some electronic and some not, as he strived to find his own musical identity after leaving the group. From the perspective of Ralf Hütter, Flür was (certainly in latter interviews and after the publication of the controversial ‘I Was A Robot’) referred to as a session musician / drummer rather than an integral part of the group, surely an opinion which would give any individual the impetus and drive to prove musically otherwise!

The album opens with the autobiographical ‘I Was A Robot’ which, using a selection of none-too-subtle KRAFTWERK references, tells the story of Flür’s time in the band. The song is the most KRAFTWERK-sounding track on the compilation, and mix-wise not that dissimilar to those that appeared on ‘Tour De France Soundtracks’, but also owing a debt to early UNDERWORLD due to the hypnotic, single chord groove used throughout the piece. A selection of vocoder and speech synthesised vocals overlay the musical elements with the hook “Robot, what did they do to you?” clearly signifying that Flür’s time spent in his former band was not always a happy one.

The second track, ‘Cover Girl’, is the much mooted sequel to ‘The Model’, this version (The Ninjaneer Mix) shares a certain musical DNA with YELLOW MAGIC ORCHESTRA and some of the work of GIORGIO MORODER. Musically melancholic and varied throughout with a high pitched gliding melody synth providing the main hook, the track’s 5 minutes and 42 seconds flash past effortlessly and is certainly the strongest piece here. The only bugbear would be that some of the early vocoder work in the piece is a little indistinct and lacks the vocal clarity to completely understand all of the lyrics.

In a little nod to his former employers, a single note riff which featured in ‘Pocket Calculator’ is deployed half way through the piece and an acoustic guitar strum is even introduced to reinforce the musicality of the song. Interestingly, an early version of the song appeared in a more lounge music / AIR-like incarnation as ‘Luscious Lady’ on the 2005 HOMME BEIGE album where Flür collaborated with Manfred Hermann and Jon Kaiser. A very similar version to the aforementioned mix features as the ‘English Version’ as a bonus track on the album. 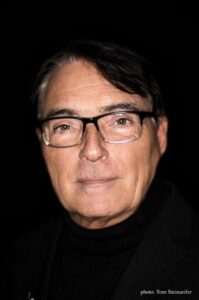 ‘Staying In The Shadow’ is the first track on ‘Eloquence – Complete Works’ that really brings Flür’s baritone vocals to the forefront in a spoken word format – the track is a collaboration with MEAT BEAT MANIFESTO’s Jack Dangers.

Incorporating what sounds like a vocal sound-a-like sample from ‘Tour De France’, ‘Staying In The Shadow’ has a more underground sound with Flür and Dangers collaborating by exchanging audio files between Düsseldorf and San Francisco before finalising the piece.

The track is also notable for featuring an EMS 3000, one of the vintage vocoders that were also used by KRAFTWERK for their signature robotic voice effect.

‘Moda Makina (Fashion Machine)’ introduces some Latino-style influences with live horns and accordion interwoven into the mix. Using similar lyrical themes as ‘Cover Girl’, it features Flür intoning the “did he really say that?” line “tits blown up, vinyl injected” in its assessment of a “former chic” and fading supermodel’s “assets”. The track itself is again VERY quirky, but does feature a killer horn riff that is crying out to be remixed into a huge dance track… whether that will ever happen remains to be seen though…

‘Axis Of Envy’ brings some welcome EBM-style menace and a harder edge to the album, a joint venture with NITZER EBB’s Bon Harris, and incorporating the much sampled / imitated drum loop from the beginning of LED ZEPPELIN’s ‘When The Levee Breaks’. Previously released under the pseudonym THE SHADOW BUREAU, the song was originally a collaboration between Harris and Jeehun Hwang featuring Flür’s vocals and appeared in the martial arts film ‘True Legend’. The song’s verses again feature Flür’s spoken word work, which (depending on whether you’re a fan) could prove a deal breaker as to whether the listener will fully embrace the piece or not.

To round off the album, in true KRAFTWERK-style, there are some alternate language versions of ‘On The Beam’ and ‘Cover Girl’ which expand the running order to an excellent value for money 18 tracks.

Tracking down the musical exploits of WOLFGANG FLÜR since the YAMO album would definitely require a considerable amount of detective work and from that perspective, ‘Eloquence – Complete Works’ is a valuable and convenient resource which compiles songs that in many cases were named differently and not obviously the work of the man himself.

However musically, ‘Eloquence – Complete Works’ is a real mixed bag. Kraftheads really won’t warm to much of the material here as it’s too far removed from the sound that Flür is inextricably linked with. However, one has to admire the sheer musical bravado on show here which showcases the work of an artist who is comfortable in attempting styles which stray considerably from those he is most well known for.