A Short Conversation with ADULT.

April 8, 2022 / electricityclub / Comments Off on A Short Conversation with ADULT. 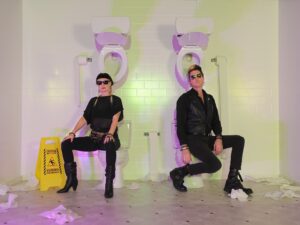 With nine acclaimed long players to their name, ADULT. issued their most recent album ‘Becoming Undone’ as a doomy discordant statement capturing “something that’s falling apart”.

In a 23 year career, Adam Lee Miller and Nicola Kuperus first came to wider attention with ‘Hand To Phone’ in 2001. Presenting a stark response to their surroundings, the dystopian demeanour of ADULT. remains as vital as ever as their living art project continues to evolve.

Although 2013’s ‘The Way Things Fall’ possessed an unexpected accessibility and 2017’s ‘Detroit House Guests’ saw the Detroit synth-punk duo open their doors to outside collaborators, this new body of work is more personal, embroiled in pain and bereavement while created in isolation during a state of flux with a healthy acceptance of destruction.

ADULT. kindly took time out from a hectic and intense European live tour to have a quick chat with ELECTRICITYCLUB.CO.UK about ‘Becoming Undone’ and the development of their dark dance aesthetic…

Thematically and conceptually, how does ‘Becoming Undone’ differ from previous ADULT. albums?

In working on a new album, we always try to approach the process differently. For instance, the last album ‘Perception IS/AS/OF Deception’ was written in a black void with minimal equipment at hand for the demos. ‘This Behavior’ was written in a remote cabin in the woods. ‘Why Bother?’ was more soundtrack oriented and based on serial killers and cult leaders.

In our latest album ‘Becoming Undone’, it was literally written out of pure necessity to try to emerge out of the liminal state we were put in through the pandemic. We did not control the concept on this record – the world did. So there is a lot more dissonance and looping motifs in this record, rhythm is stronger than melody as there was no harmony in the world as we wrote it. This album was a mirror to the world land life in general. 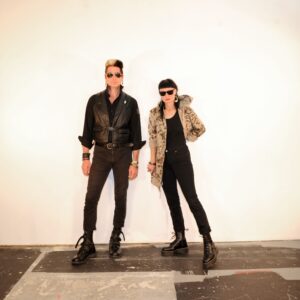 ‘Becoming Undone’ has been described as capturing “something that’s falling apart”?

Well, we wrote the album during the pandemic when everything was falling apart. Massive amount of people were dying of the virus and Nicola‘s father passed away (not from Covid, but during the pandemic). We had lost all of our tours and all of our income. Then as we were trying once again to get into the writing process, the ex-loser President of the United States decided to try to do his big lie and steal the election, followed by the insurrection on the US Capitol – sooooo everything really was falling apart and we felt to album should mirror that.

As well as synths, ‘Becoming Undone’ sees vocal loop pedals added to the tech armoury, what attracted you to using these?

One of the main things we like about analog equipment (which is 97% of our studio) is the different interfaces they have and the different abilities to move between control and arbitrary experimentation. We both find vocal loop pedals very non-intuitive (as opposed to something from Roland, which we understand easily the way the gear works). So for us, the looper gave us a chance to not be in control, to come up with some layers or parts to songs that we normally would not come up with. It added randomness to the songs.

The music has ramped up percussively and ‘Our Bodies Weren’t Wrong’ comes with a fitting EBM backdrop, had there been any inspiration from having worked previously with Douglas J McCarthy of NITZER EBB?

NITZER EBB has always been a major influence for the both of us. It was one of the few bands when we met years ago that we really had in common. The music on the new album ‘Becoming Undone’ has become more and more percussive because we included electronic pads, not only to the writing process, but to the live set as well. This came out of many different reasons, but one was that we figured after the pandemic, people were going to be ready to rage and as London, Brussels, Berlin and other cities have proven – that is very true! 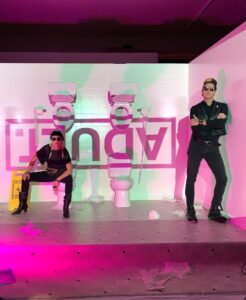 THROBBING GRISTLE have been cited as an influence on the album with ‘Normative Sludge’ examining the delusional nature of the Instagram / Tik Tok generation, why was this such an inspirational source for you?

THROBBING GRISTLE is one of our favorite bands and it not only comes down to the quality of the songs but also the way they do not fit into any single genre. They came up with a name for their own genre (Industrial) which must have been very liberating until it was stolen from them for idiots like Marilyn Manson. Going back to this idea of things falling apart, THROBBING GRISTLE is so good at having songs that sound like they’re falling apart. As we wanted to discuss the ideas of collapse, they were an obvious inspiration.

Although there is less melody this time round, do you think ‘Undoing / Undone’ and ‘I Am Nothing’ could be considered quite classic ADULT. songs?

The only way to know if something will be classic is to allow time to pass. For us, everything on this new album is too close to us right now to dissect.

Industrial S&M looms on ‘I, Obedient’, is society too submissive now?

‘Teeth Out Pt. II’ is a doomy aural collage of drones like a symbol of decay, how did the track come together?

This is one of those magical tracks where we got the new looper and we had absolutely no idea how to operate it. Adam always reads manuals but Nicola never does and that brings two different approaches to the song writing process. So Nicola just started immediately working with the pedal and suddenly there were three or four really beautiful layers counterpointing each other. When we came back to the demo months later, we were shocked it was almost complete as it was. We even tried adding drum machines to the song but in the end it became our first song ever without any beats! 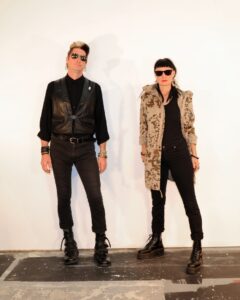 What are your hopes and fears for the future, you have talked about how “Humans have always been pretty terrible”?

We have no hopes for the future and we have many fears like everyone right now, but at the end of the day we just have to be present – at least try to. Living in the moment seems to be the most important thing right now. We played a pretty insane show in Brussels two weeks ago and there was this 9 year old girl that was the daughter of one of the volunteers at the venue that befriended us during the evening and after the show she came up to Nicola and said “Do you know what I liked about your show? You just went for it!” That’s our current motto for this time and place in time.

ELECTRICITYCLUB.CO.UK gives its warmest thanks to ADULT.

‘Becoming Undone’ is released by Dais Records, available in various formats from https://adultmusic.bandcamp.com

Posted in Interviews Tagged with ADULT.