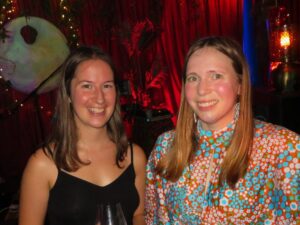 While both exhibit an earthy plaintive approach vocally, technologically they sit at quite different sides of the spectrum.

For Alice Hubble, the analogue warmth of vintage keyboards has always been a key DNA constituent of her sound.

To launch her second solo long player ‘Hexentanzplatz’, she had her trusty Moog Prodigy as part of an expanded live set-up also featuring Tom Hilverkus on the small but mighty Yamaha Reface CS mini-keyboard and Nord Lead 3. But for Hattie Cooke who uses just GarageBand for her take on synth, it was a MacBook with backing tracks and lyrics that augmented her first live performance for over two years. Hailed as one of the best new talents in Britain, despite the release of her third album ‘Bliss Land’, she had never played live in the capital before.

Beginning with a sat down solo guitar take of ‘One Foot Out The Door’, a tinge of folk illustrated its roots but also how it was more or less structured before electronic textured for ‘Bliss Land’. Standing up after this sedate start, Hattie got upbeat and electronic with the glorious ‘I Get By’, a song that wouldn’t sound out of place in the Italians Do It Better catalogue. She amusingly added that her more recent electronic pop material was “less suicidal” than her previous work; “I’ve always been a hoot” she quipped, “but I wasn’t so happy back then…” – the forlorn strum of the semi-ironic ‘Happy Today’ from her self-titled debut record was a sign of how far she had moved on. 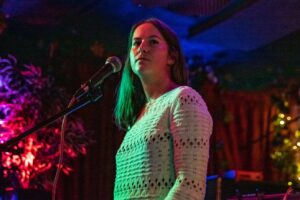 Cooke promised jokes and her one about Dr Who having Dalek bread as a side order to pizza highlighted her charm. Although tinged with melancholy, songs such as drum machine dominated ‘Lovers Game’ and the much sparser ‘Summer Time’ use appealing arrangements that harmonise well with her voice.

Her focus on writing songs first has set her apart from the boys with their toys whose equipment is used as the excuse for the songs rather than the other way round.

The mechanised tension ‘Mistaken’ offered Hattie’s own quirky interpretation of a dancefloor filler before closing with the reflective ‘Youth’. Although Hattie Cooke has more aurally expansive in her productions, she might have benefitted from undertaking some live synth soloing during the instrumental sections as she looked slightly lost during these moments; in her delightful stage banter, she did admit to forgetting to pack the correct lead for it. There is room for improvement in the live presentation so as her audiences grow, she could do a lot worse than to follow the lead of the evening’s headliner.

Alice Hubble opened her longest live set to date with the watery wash of ‘West Reservoir’, while visually enhanced by shades of misty red and billowing smoke. The wonderful ‘My Dear Friend’ provided a touching ode to Alice’s late parents while the synthetic glam of ‘Kick The Habit’ was boosted by bursts of the Prodigy, the synth, not the band; this classic Moog also provided some further elegiac resonance to ‘Goddess’, a number that became a favourite of BBC 6 Music’s Steve Lamacq at the time of its release in 2019. 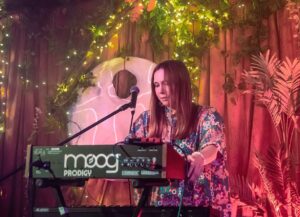 Dreamy Mellotron tines and more Moog Prodigy bedded the rousing indie synthpop of ‘Projections’, the undoubted standout of the ‘Hexentanzplatz’ opus, while the strident title track and ‘Power Play’ pointed to the weightier developments in the Alice Hubble sound, both musically and lyrically.

The progressively constructed ‘Still’ from ‘Polarlichter’ came over as spacey as ever before the motorised soundscape of ‘Gliechfalls’ acted as an exhilarating cosmic jam to finish.

One notable absentee from the set was ‘We Are Still Alone’, the best song on ‘Polarlichter’ and its presence would have been more preferable to the lengthy instrumental ‘Atlantis Palm’ which although a beautiful album, unnecessarily stalled momentum mid-show. But minor quibbles aside, it was an entertaining show that even prompted energetic dancing from a young hipster couple new to Alice Hubble and who enthusiastically visited the merch stand afterwards.

Electronic pop may not ever hit the mainstream heights of 1981 again although four decades on, its understated feminine variant is making its presence felt in the enchanting songs of Alice Hubble and Hattie Cooke.