June 15, 2017 / electricityclub / Comments Off on ALISON MOYET Live at Hackney Round Chapel 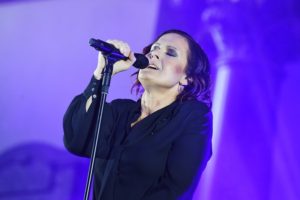 On the eve of the release of her new album ‘Other’, ALISON MOYET delivered a stupendous performance at Hackney’s Grade II listed Round Chapel in East London as part of Amazon Prime’s series of filmed intimate concerts.

The evening started with Ms Moyet as her own support act, courtesy of a Q&A moderated by journalist Pete Paphides.

They discussed a wide variety of subjects including her current college course in figurative sculpture, the observational nature of her new record and setting fire to her old leather jackets as part of a decluttering process before moving to her new home of Brighton. She discussed how her daughter was particularly upset that these weren’t passed on to her; “GET YOUR OWN” was her mother’s reply! 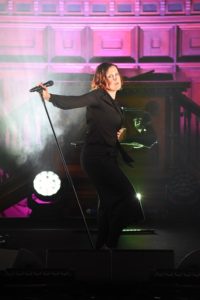 The musical proceedings began with ‘I Germinate’, the dramatic opening salvo from ‘Other’ inspired by one of her Mythology sculpture studies.

Accompanied by band members John Garden and Sean McGhee within a primarily electronic backdrop, an updated but largely unaltered ‘Nobody’s Diary’ quickly burst forth to the delight of the crowd.

Looking particularly radiant, Ms Moyet took time to address her audience with some down-to-earth banter. Remarking about how difficult some songs were to sing live, she amusingly introduced the marvellous synthy drama of ‘Reassuring Pinches’ as “A COMPLETE BASTARD”!

As well as songs from ‘Other’

, Ms Moyet delved into her solo back catalogue. ‘Falling’ perhaps surprisingly got one of the biggest cheers and prompted several members of the audience to dance. Meanwhile, there were some interesting new arrangements of songs from ‘Alf’ and ‘Raindancing’. With their productions respectively by Swain & Jolley and Jimmy Iovine, the recorded originals now sound very much of their time.

A song co-written with EURYTHMICS’ David A Stewart under the pseudonym of Jean Guiot, ‘Is This Love?’ got a blippy new waltz arrangement, while a very sparse percussion free ‘Ordinary Girl’ gave the song a resonance that hadn’t been previously present. ‘All Cried Out’ though changed time signatures between verse and chorus which added a new tension to proceedings. 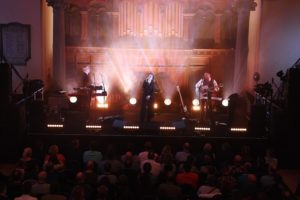 With an added growly presence, Ms Moyet was in fine voice but mention must be made of Sean McGhee who was a particularly good backing vocalist, complimenting her distinctive tones throughout the evening.

It wasn’t all about ballads though, as the gritty dubstep pop of ‘Changeling’ from ‘the minutes’

added some feisty energy to the set, while the cinematic orchestrated grandeur of ‘The Rarest Birds’ celebrated Ms Moyet’s revitalised life in Brighton.

Later on in the show, McGee took to bass guitar and Garden strapped on a six string for the NRA baiting ‘Beautiful Gun’. Here, Ms Moyet also showed her former school classmates from Nicholas Comprehensive how a bluesy electro romp should be done. Indeed, the new material from ‘Other’ confirmed how weak the most recent offering from DEPECHE MODE  actually is in comparison…

There was another return to her YAZOO days with a synth noir take on ‘Only You’ that appeared to have been transposed into a minor key reboot before the bouncy ‘Right As Rain’ provided an uptempo spark into the final straight.

A spirited semi-acoustic rendition of Jules Shear’s ‘Whispering Your Name’, which incidentally was also a minor Australian synthpop hit for IGNATIUS JONES back in 1983, got another positive audience response before an untouched and untouchable ‘Situation’ had the whole of the Round Chapel onto their feet as a conclusion to the main act. 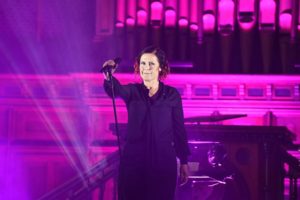 Returning for a passionate ‘Love Resurrection’ and a rapturous crowd singalong for ‘Don’t Go’, the evening was an outstanding launch for Ms Moyet’s upcoming world tour to support ‘Other’. It was triumphant performance from ALISON MOYET with interesting facelifts of her solo hits, a welcome airing of YAZOO evergreens and best of all, excellent new material. Now if only another act from Basildon could still be this vital, inventive and entertaining…