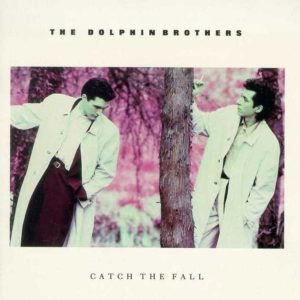 After JAPAN split at the end of 1982, vocalist / songwriter David Sylvian and bassist Mick Karn set to work collaborating with Ryuichi Sakamoto and Midge Ure respectively as well as preparing solo albums.

Meanwhile, drummer Steve Jansen and keyboardist Richard Barbieri partnered up for the JVC commissioned instrumental work ‘Worlds In A Small Room’ released in Spring 1985 to accompany a documentary on the Space Shuttle Challenger. But for their song-based project, the more reserved pair named themselves THE DOLPHIN BROTHERS.

The album was co-produced by Yoshifumi Iio who had worked with Yukihiro Takahashi of YELLOW MAGIC ORCHESTRA and in particular, the brilliant interim single ‘Stay Close’

with Jansen in Autumn 1986. It was this duet in which Jansen debuted as a vocalist, so it naturally fell to the young sticksman to undertake vocal duties for THE DOLPHIN BROTHERS.

With a Sylvian-esque brow raised, the atmospheric ‘Catch The Fall’

title song with complimentary double bass from Danny Thompson sounded like it could have been a collaboration between TALK TALK and JAPAN. With the sparse percussive textures never overwhelming the proceedings, Clive Bell’s khene and crumhorn successfully added a touch of ethnic mystery.

as did Matthew Seligman’s fretless bass, coming together like JAPAN with an added pop sensibility.

The accessibly dynamic ‘Second Sight’ picked up on Jansen’s Takahashi influences and grooved like a good Ferry styled pop tune should with some fabulously produced drums. With the mellow mood of later era CHINA CRISIS, Jansen offered his best Sylvian impersonation on ‘Love That You Need’, a track that could have been mistaken for his brother if it wasn’t for Suzanne Murphy’s girly refrain. Barbieri’s synths aided the possible case for mistaken identity.

The directly upbeat ‘Real Life, Real Answers’ was an obvious cousin of ‘Stay Close’ and as pop as ‘Catch The Fall’ would get, capturing a combination of acts that had been influenced by JAPAN such as ICEHOUSE and LUSTANS LAKEJER who furthered the template in their own home territories of Australia and Sweden respectively. With a wonderfully clean sound, this is a truly underrated jewel from the canon of Jansen and Barbieri 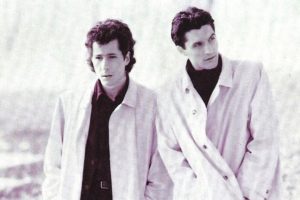 Taking things down, the laid back ‘Host To The Holy’ displayed eerie Barbieri synths with a lilting percussive mood from Jansen in the vein of TALK TALK’s ‘Happiness Is Easy’. Comprising of primarily piano and vocals with only partial augmentation from synths and double bass, ‘My Winter’ was reminiscent of the more organic material on Sylvian’s ‘Secrets Of The Beehive’, but with less of a hazy demeanour.

The closing ‘Pushing The River’ delivered Jansen’s best vocal of the set, while Barbieri’s gorgeous artful textures and synthetic brass helped the song come over like what a JAPAN track might have sounded had the band continued recording into 1983.

Compared with David Sylvian and Mick Karn’s solo work or the JAPAN comeback as RAIN TREE CROW in 1991, ‘Catch The Fall’ was pop music, but of the more sophisticated variety. However, in the compact disc era from which it emerged, the market was saturated with comparable acts such as TEARS FOR FEARS, TALK TALK, THE BLUE NILE and CHINA CRISIS. 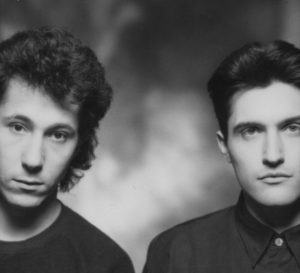 While featuring good songs that were well played and programmed as well as cleanly produced, what ‘Catch The Fall’ perhaps lacked was some of the sound design and innovation found on ‘Tin Drum’ or subsequent records that Jansen and Barbieri would go on to record with each other and separately in later years.

This could have been due to the prevalent preset trap with thebearly digital technology of the time, or an effort to appease Virgin Records to produce a marketable, commercial record.

However, the running order might not have helped the flow of the record while ‘Real Life, Real Answers’ would have made a better single than ‘Shining’ in the quest to attract potential purchasers.

Alas, ‘Catch The Fall’ did not sell, so Jansen and Barbieri departed from the label they had been with since 1980’s ‘Gentlemen Take Polaroids’ and the songwriting world, to return to more independently minded experimental climes, most notably as JBK with Mick Karn via their own Medium Productions set-up.

While THE DOLPHIN BROTHERS only made one album, ‘Catch The Fall’ has stood up well thirty years after its making. For those JAPAN fans who may have found the improvisational nature RAIN TREE CROW something of a disappointment and may have given up on the various members’ solo projects after 1984, this album is worthy of investigation.

It may not be Jansen and Barbieri’s best work, but it is very good all the same.