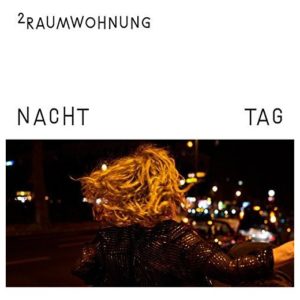 The German electronic duo 2RAUMWOHNUNG have been active since 2000.

Very well known in their native land, Inga Humpe and Tommi Eckhart started out in the legendary Sternradio club in Berlin’s Alexanderplatz.

still remains the Berliners’ biggest achievement to date, a brand new outing is being tested upon the lovers of the quirky side of synth.

is indeed a rather eclectic mix of tunes, cunningly performed in a mix of English and German. Bearing the elements of typical Teutonic beats, interspersed with occasional club, trance, some gripping guitar and a great dose of synth op, all wrapped up with a dreamy, candied voice of Humpe, ‘Night and Day’ is a perfect easy listening record, even if one isn’t educated in the nuances of the German language. 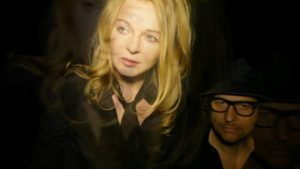 Probably the most interesting element of the production is how the songs have been presented as those of night, “nacht”, and their equivalents of day, “tag”.

‘Bonjour Cherie’ grips with the recognisable voice of Dieter Meier of YELLO, twinned with the seductive additions from Humpe. Excellently executed, thanks to the help of guest instruments, such as trumpets, it really is delicious.

‘Lucky Lobster’ with Umami sounds very beachy, Hawaiian style in the “day” and more ABBA like at “night”.

The ravishingly dancey ‘Hotel Sunshine’ during the night, becomes more primal during the day, while ‘Somebody Lonely & Me’ hardens up in daylight, to revert to the primal synth YAZOO style at night time. A worthy first single, it’s a true gem on both sides of the mirror.

Both versions of ‘1993’ are similarly captivating, giving out the aura of said year and the 90s in general. The day version is laid back to the point where David Lynch could have easily used it in his newest ‘Twin Peaks’ series during the closing titles.

It’s quite a return for 2RAUMWOHNUNG, with the cleanly executed “nights” and sunny “days” of the 1950s.

The concept of presenting two versions of each tune is endearing and quite clever, showcasing the numbers as totally different entities and visualising the tracks from different perspectives. Far better than listening to five mediocre remixes of equally mediocre songs that some artists like to feed us with.

While a few will say that 2RAUMWOHNUNG were past it a long time ago, it has to be stressed that ‘Nacht Und Tag’ proves to be a worthy alternative proposition for many this summer.

is released by It Sounds GMBH in 2CD, double vinyl and digital formats