‎“When Brian Eno calls himself a non-musician, he isn’t confessing a fault or admitting a deficiency. His self-evaluation is a proud stroke against obsolete concepts in rock and roll. He is a madcap ringmaster in the centre ring, introducing an act that will not only make music sound different, but change what it means” 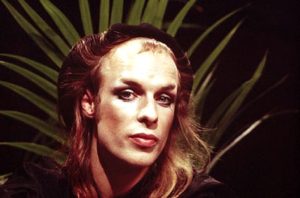 In his autobiography ‘In The Pleasure Groove: Love, Death & Duran Duran’, John Taylor remembered the man who at the time was just known as ‘Eno’: “They had this keyboard player who just turned knobs… how the hell does that work??”

Although Bryan Ferry was the art rock combo’s leader and songwriter, Eno attracted his own legion of fans and inevitably took away some of the limelight. Following two acclaimed albums, Eno left ROXY MUSIC after being told by Bryan Ferry in June 1973 that they would never share the same stage again!

Tensions had been running high at Roxy gigs with Eno’s fans gathering to the left of the stage chanting “ENO-ENO!” while Ferry’s fans were to the stage right chanting back “FERRY-FERRY!” – Ferry later admitted “I wasn’t very good at sharing” but EG Management who looked after ROXY MUSIC weren’t too unhappy, saying to Eno: “We feel you’re ready for a solo career!”

To celebrate the start of that solo career, Eno’s first four classic vocal albums ‘Here Come The Warm Jets’, ‘Taking Tiger Mountain (By Strategy)’, ‘Another Green World’ and ‘Before & After Science’ have been reissued as deluxe gatefold 2LP heavyweight vinyl editions mastered at half-speed for 45RPM, effectively now presenting each album as two EP mini-albums. 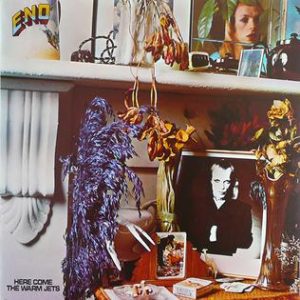 released in January 1974 followed a thrashy, energetic style inspired by THE VELVET UNDERGROUND. Its hybrid of glam, progressive and art rock continued in a vein similar to early ROXY MUSIC.

Eno’s willingness to experiment and challenge conventional rock traditions only affirmed to some observers that he was the originator of the arty Roxy sound, as Ferry & Co mellowed and gradually turned into STEELY DAN!

With its humourous money shot title, ‘Here Come The Warm Jets’ was dominated by guitar-driven numbers like the neo-instrumental title track, ‘Needles In The Camel’s Eye’, ‘Baby’s On Fire’ and ‘The Paw Paw Negro Blowtouch’, although the latter’s madcap synth solo and electronic treatments provided Eno with his USP. However, alongside these noise experiments were softer, more introspective numbers like the wonderful ‘Some Of Them Are Old’. It was a good debut, but things would get even better. 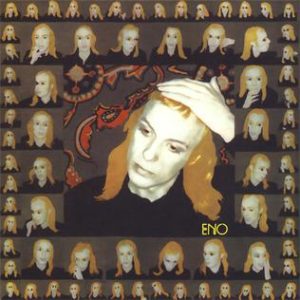 Named after a Peking Opera, just the influential nature of ‘Taking Tiger Mountain (By Strategy)’

released in November 1974 signified the importance of his sophomore offering and this was without its more cerebral approaches and observations on Chinese Communism.

OMD borrowed the templates of ‘Back In Judy’s Jungle’ and ‘China My China’ for ‘Maid Of Orleans’ and ‘Genetic Engineering’ respectively, while the bassline similarities of ‘The Fat Lady Of Limbourg’ with BLANCMANGE’s original ‘Some Bizzare Album’ take on ‘Sad Day’ are there loud and clear.

Then there was BAUHAUS later turning ‘Third Uncle’ into a goth disco favourite with only minor amendments and Manchester post-punk funksters A CERTAIN RATIO getting their name from a lyric in ‘The True Wheel’.

Musically, ‘Taking Tiger Mountain (By Strategy)’ was again guitar based but there was also the pretty lullaby of ‘Put A Straw Under Baby’, while a beautiful elegiac quality aided by synthesizers seeped into the album’s solemn title track closer.

However in early 1975, Eno’s life took a major turn when a car accident left him hospitalised and temporarily immobile. While convalescing, he attempted to play a record of 18th Century harp music and unable to get up to adjust the volume which was set too low, the almost inaudible soundtrack made him realise how music could be part of the ambience of its environment. 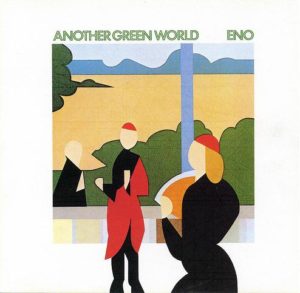 It changed Eno’s outlook and his way of making music.

Co-produced by Rhett Davies, the first fruit of labour was the experimental ‘Another Green World’

released in September 1975. Unlike his previous solo records, he had no material pre-prepared before entering the studio.

Largely gone were the guitar based numbers of the first two albums, although the art funk of ‘Sky Saw’ featuring Percy Jones on fretless bass, Phil Collins on drums and John Cale on viola must have caught the ear of a certain David Robert Jones.

Instead, there were shorter tracks, many of them evocative instrumentals dominated by keyboards and synthesizers like the iconic title track which was eventually used as the theme to the BBC2 arts programme ‘Arena.

Pieces such ‘Sombre Reptiles’, ‘Becalmed’ and ‘Spirits Drifting’ signalled where Eno was heading musically, but the album’s best track was the beautiful piano-led ‘Everything Merges With The Night’. This mournful tune, featuring a flat but honest vocal from Eno, was to become a key influence on GARY NUMAN for his ballads ‘Complex’ and ‘Please Push No More’.

The critical acclaim for ‘Another Green World’ saw Eno becoming a man in demand as a collaborator, which led to the two year gestation period for ‘Before & After Science’

released in December 1977. It was his first vocal record credited as ‘Brian’ and to be his last one for many years as he divided time working with ULTRAVOX, DAVID BOWIE, CLUSTER and TALKING HEADS. Indeed, the latter were the inspiration for the metallic romp of ‘Kings Lead Hat’; the title was an anagram of the art school combo’s name while the track itself was later covered by ULTRAVOX.

As with Bowie’s ‘Low’ and ‘Heroes’ which Eno had worked on, ‘Before & After Science’ presented its material as pop and experimental sides.

The first side included the quirky ‘Blackwater’ with its fabulous stabs of synth, while the material that formed the almost percussion-less second side was another pointer of things to come.

Adding a Yamaha CS80 to his EMS AKS and Minimoog synth armoury, a gentle sophistication manifested itself, particularly on the sumptuous nautical folk of ‘Spider & I’.

Meanwhile the album’s acknowledged highlight ‘By This River’, co-written with CLUSTER and engineered by Conny Plank, was subsequently revisited by Martin Gore of DEPECHE MODE for the second instalment of his ‘Counterfeit’ covers project in 2003.

After ‘Before & After Science’, Eno largely steered clear of conventional vocal led material for his own work and went into full ambient mode, releasing the highly regarded ‘Music For Airports’ in March 1978. There would be further lengthy ambient electronic offerings such as ‘Thursday Afternoon’, ‘The Shutov Assembly’, ‘Neroli’, ‘Lux’ and more recently ‘Reflection’.

Although today, Brian Eno might be seen within the rock sphere as the producer of U2 and COLDPLAY, this quartet of recordings chronicles his musical journey as to how it all began.

While this series of reissues is restricted to vinyl, CD and digital formats are already available. Anyone remotely interested in popular music should give these inventive albums a listen, in whatever format.

and ‘Before & After Science’