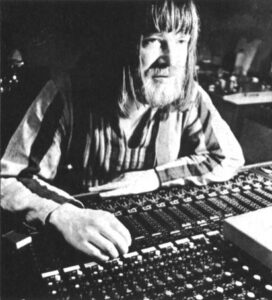 It was at Conny’s Studio just outside of Cologne that a number of landmark recordings were completed, notably KRAFTWERK’s ‘Autobahn’ and ULTRAVOX’s ‘Vienna’.

The studio was the operational centre of engineer and producer Konrad Plank whose innovative portfolio covered a wide spectrum of music.

CONNY PLANK’s work with pioneering German experimental acts such as KRAFTWERK, CLUSTER and NEU! had a strong influence on David Bowie and Brian Eno, and thus ultimately every act that emerged from Synth Britannia.

Using a customised mixing desk, Plank favoured a dynamic production ethos that went against the grain of the compressed rock recording of the times. His influence was quite evident when ULTRAVOX worked with George Martin on the ‘Quartet’

album in 1982; compared to their Plank produced Cologne Trilogy of ‘Systems Of Romance’, ‘Vienna’ and ‘Rage In Eden’, ‘Quartet’ sounded thin and lacked density. But as history has shown, a producer can only achieve so much when the artists themselves are not delivering and even Plank’s involvement in ULTRAVOX’s lamentable ‘U-Vox’

album could not save it.

Plank’s key to getting the best out of his work was to enjoy the company of the acts he worked with. This was a particularly important requisite when trapped inside a countryside complex away from the social distractions of a city.

, only the final day involved any actual recording as he had spent the first three days getting to know them; the relationship with DAF continued for a further three albums. However, legend has it that after being introduced to U2 by Brian Eno with the view to producing ‘The Joshua Tree’, Plank turned down the job declaring: “I cannot work with this singer!” 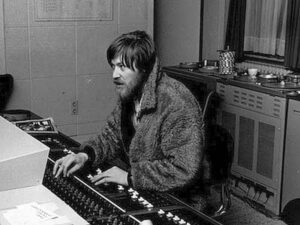 As well as studio work, Plank was also an active musician. It was while touring South America with CLUSTER’s Dieter Moebius that Plank fell ill; he sadly passed away in December 1987 at the age of 46.

CONNY PLANK leaves an important musical legacy, so here is a look back at twenty of his works, with a restriction of one track per album project… 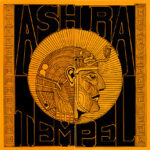 ASH RA TEMPEL were a highly important Kosmiche band; it was the platform from which future electronic exponents Manuel Göttsching and Klaus Schulze emerged; they later found acclaim with their respective progressive opuses ‘E2-E4’ and ‘Mirage’. Plank engineered their very different debut album, seeded from sessions of free-form improvising. With just one track per side of vinyl, the building eerie atmospheres of ‘Traummaschine’ contrasted with the noisier rock of ‘Amboss’. 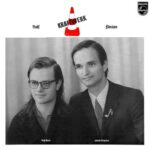 Having engineered KRAFTWERK’s first two albums and the earlier ORGANISATION ‘Tone Float’ long player, Conny Plank helped Ralf Hütter and Florian Schneider’s shift towards synthesizers on their third long player. A Minimoog and an EMS AKS appeared, but a Farfisa electric piano and a preset rhythm unit were the dominant textures of ‘Tanzmusik’. Things were becoming more structured and with the abstract use of vocals, ‘Ralf & Florian’ were heading closer to the sound that would change popular music. 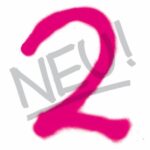 Plank acted as mediator between the NEU! nucleus of Michael Rother and Klaus Dinger who each had quite different personalities and aspirations. Over a classic Motorik beat, ‘Für Immer’ featured carefully layered mini-cacophonies of sound. Indeed, so much studio time was spent on the track, the duo ran out of budget. In a fit of madness or genius, Dinger came up with the idea to fill the second half of the album with speeded up and slowed down versions of their previously released single ‘Super’! 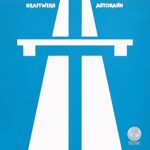 Under Plank’s stewardship, ‘Autobahn’ was KRAFTWERK’s breakthrough release as their transition into electronic pop. Ralf Hütter’s octave shifting Minimoog formed the rhythm backbone alongside a futuristic electronic snap, while Florian Schneider’s ARP Odyssey took the melodic lead over a 22 minute car journey. But with Hütter and Schneider growing increasingly confident, the parent album was to be their last recording with Plank. The rest is history…

Available on the KRAFTWERK album ‘Autobahn’

Unable to recreate NEU! live as a duo, Rother headed to Forst to meet with Dieter Moebius and Hans-Joachim Roedelius of CLUSTER to discuss the possibility of collaborating to augment their sound. While their debut ‘Musik Von Harmonia’ was recorded as a trio, for the follow-up ‘Deluxe’, they added vocals, a drummer in Mani Neumeier of GURU GURU and Plank to assist with production. The wonderful synth work on the title track signalled a melodic sensibility that was equal to that of KRAFTWERK.

Available on the album ‘Deluxe’ 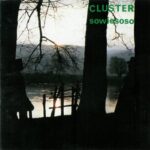 Plank’s long association with Dieter Moebius and Hans-Joachim Roedelius began in 1969 when he engineered their debut album ‘Klopfzeichen’ as KLUSTER. Their fourth album ‘Sowiesoso’ was CLUSTER’s first fully realised exploration into ambient electronics. With gentle melodic phrasing and unimposing rhythmical patterns, the title track was a wonderfully hypnotic adventure that welcomed the listener into the soothing world of the long player’s remaining aural delights.

Available on the CLUSTER album ‘Sowiesoso’ 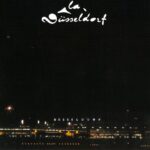 The third NEU! album saw a two styled approach with the second side featuring a frustrated Klaus Dinger looking to seek the limelight. He finally got what he wanted in LA DÜSSELDORF. With his brother Thomas and Hans Lampe as percussionists, he headed down a more aggressive direction on their debut self-titled LP produced by Plank. There was a lot of Düsseldorf as the frantic tracks ‘Düsseldorf ’and ‘La Düsseldorf’ proved, but ‘Time’ was the epic lengthy album closer that built to a brooding climax.

Rother’s first three solo albums ‘Flammende Herzen’, ‘Sterntaler’ and ‘Katzenmusik’, were produced by Plank and featured CAN’s Jaki Liebezeit on drums. “It would be unfair really to have a favourite album” said Rother when TEC asked if he had a preference, “Of course, I try to highlight Conny Plank’s contribution, he was so valuable… we wouldn’t have been able to record NEU! or the second HARMONIA album or my solo albums without Conny, so he’s all over the place in my music… thank you Conny”. 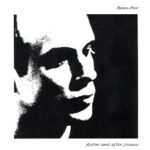 Originating from his sessions with Dieter Moebius and Hans-Joachim Roedelius in Forst for HARMONIA 76, Eno produced this beautiful piano and synth ballad at Conny’s Studio with Plank at the engineering controls for inclusion on his fourth pop solo album ‘Before & After Science’. The warmth extracted from the Yamaha CS80 used was one of the key stand-out elements of ‘By This River’, which was later covered by DEPECHE MODE’s Martin Gore for his ‘Counterfeit 2’

Available on the BRIAN ENO album ‘Before & After Science’ 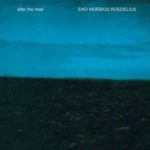 Available on the ENO MOEBIUS ROEDELIUS album ‘After The Heat’ 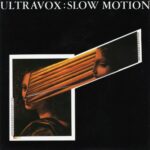 The first phase of ULTRAVOX! was dominated by the songwriting of John Foxx, but ‘Slow Motion’ was a group effort. Decamping to Conny’s Studio, the intro and theme were composed by bassist Chris Cross on his newly acquired EMS AKS. The quintet locked together as never before, with Billy Currie’s ARP Odyssey playing off Robin Simon’s treated guitars almost as one behind Warren Cann’s powerful, syncopating drums. Sadly, this breakthrough was not to last…

Available on the ULTRAVOX! album ‘Systems Of Romance’ 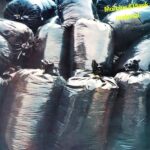 Dieter Moebius and Conny Plank released their first collaborative effort, the reggae influenced ‘Rastakraut Pasta’ in 1979. For the second album ‘Material’, a more rigid beat was applied, as well as driving synthesizer rhythms. ‘Tollkühn’ was a mightily pulsing electronic workout that more than suited the title’s English translation of ‘Daredevil’. Full of phasing effects with the odd cymbal interjection, it now stands out as ahead of its time in the context of 1981. Moebius sadly passed away in 2015. 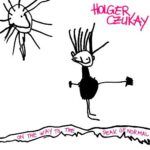 By 1981, Holger Czukay was at the zenith of his Dali-inspired surrealist sound painting, having released ‘Movies’ in 1979. Following their LES VAMPYRETTES collaboration in 1980, Plank contributed ‘Witches’ Multiplication Table’ to ‘On the Way To The Peak of Normal’, the second solo album by the CAN bassist. With Czukay providing an oddball monologue over a dub backbone, Plank added cemetry synthesizer violin alongside bursts of French horn; “Craziness is something holy” he later said. 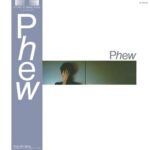 Available on the PHEW! album ‘Phew!’ 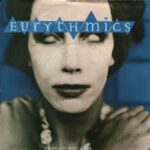 With blue eyed soul hits like ‘Would I Lie To You?’, ‘Sisters Are Doing It For Themselves’ and ‘Thorn In My Side’, it’s unusual in hindsight to understand that Annie Lennox and Dave Stewart were actually interested in rhythmic electronic music from Europe, hence their name. When the pair left THE TOURISTS, one of the first to lend support for their new aspirations was Conny Plank. ‘Never Gonna Cry Again’ with its doubled synth and flute solo was the first song released from their production partnership.

Available on the EURYTHMICS album ‘In The Garden’ 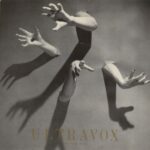 So happy was Plank with working with Warren Cann, Chris Cross and Billy Currie on ‘Systems On Romance’ that when Midge Ure joined following the departure of John Foxx, he offered to finance the recording of a new ULTRAVOX album. The reconfigured quartet signed to Chrysalis and delivered the hit album ‘Vienna’

. Produced in Conny’s Studio for the follow-up ‘Rage In Eden’, ‘The Thin Wall’ densely merged synthesizers, guitar, piano, violin and Linn Drum for a formidable yet under rated hit single.

Available on the ULTRAVOX album ‘Rage In Eden’ 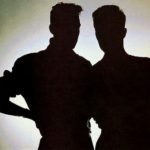 Gabi Delgado-López and Robert Görl had worked with Plank since 1979 and with his assistance, DAF had reduced to a minimal electro body core of Görl’s tight drumming and synth programming driven by a Korg SQ-10 analogue sequencer to accompany Delgado-López’s shouty, aggressive vocals. As with a previous Plank production ‘Der Mussolini’, DAF again courted controversy on ‘Kebab Träume’ with the provocative line “Deutschland! Deutschland! Alles ist vorbei!”

Available on the DAF album ‘Für Immer’ via Mute Records 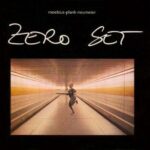 Mani Neumeier was best known as the percussionist and singer of GURU GURU, the psychedelic jazz combo from Heidelberg who recorded three albums with Plank. Joining him and Moebius for a one-off long player ‘Zero Set’, Neumeier’s presence was felt heavily on ‘Speed Display’, a mad hyperactive collage of drums, bubbling electronics and treated robotic vocals that did exactly what it said on the tin! The drumming was so tight that some have highlighted it as an example of proto-techno! 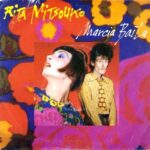 ‘Marcia Baïla’ was LES RITA MITSOUKO’s tribute to their late friend, Argentinian dancer Marcia Moretto. With Plank at the production helm, a squelchy backing track with enough space for Catherine Ringer’s strident theatrics was honed for a wonderful celebration of life. It was subsequently covered by Ricky Martin in 1998. LES RITA MITSOUKO went on to become very popular in France, collaborating with SPARKS in 1990. Fred Chichin, the other half of the duo, sadly passed away in 2007. 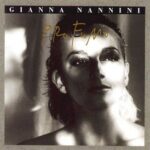 The Italian singer / songwriter unusually had something in common with NITZER EBB’s Douglas J McCarthy in that she too had a relative who was a F1 driver; in her case it was her brother, one-time Grand Prix winner Alessandro. Plank started working with Nannini in 1982 at a time when he was still regarded as a more artistically minded producer, rather than one who delivered pop hits. ‘Bello E Impossibile’ was a huge hit in her homeland, but also in Switzerland, Austria and West Germany. 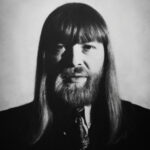