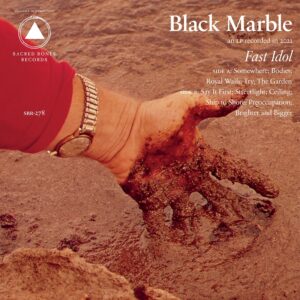 ‘Fast Idol’ is Chris Stewart’s fourth album as BLACK MARBLE and his second on Sacred Bones Records, home to THE SOFT MOON and ZOLA JESUS.

Capturing the uncertainty of the future provoked by world events, Stewart pays homage to “the forgotten bedroom kids of the analogue era” such as ASYLUM PARTY, FUTURISK and OPPENHEIMER ANALYSIS.

While the previous BLACK MARBLE album ‘Bigger Than Life’ looked at cultural shifts in the US inspired during bus rides to his Los Angeles studio, ‘Fast Idol’ is more enclosed and inward looking, solitary even…

The sub-six minute ‘Somewhere’ acts as a fine opener with a beautiful filmic introduction before suddenly speeding up for its vocal section to offer some vibrant stoner synthpop reminiscent of New Yorkers NATION OF LANGUAGE, dressed with digital chimes, plonks and incessant pulsations.

The minimal structuring of ‘The Garden’ presents a doom-laden drum machine waltz and is given a barrage boost of toms and cascading keys. But more guitar driven with an optimistic Far Eastern tone, ‘Say It First’ plays on post-punk Northern Englishness like THE DURUTTI COLUMN gone perky.

‘Streetlight’ reveals the influence of acts like CLUSTER with its shuffling take on Motorik and THOBBING GRISTLE dropped into moonlit gothic cocoon while the percussive ‘Ceiling’ is a homage to NEW ORDER’s early tribal gothic disco. 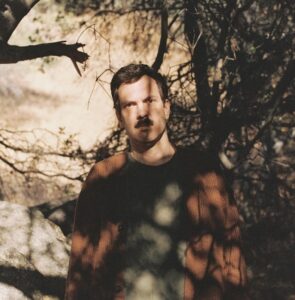 Despite its array of offbeats, ‘Ship To Shore’ remains constant with its driving staccato backbone, but ‘Preoccupation’ is phat and pumping with counter-melodies galore before ‘Brighter & Bigger’ closes with a spacey ballad that cleverly doesn’t reveal itself to be a waltz until about a minute in.

The nonchalant vocals, while a trademark of BLACK MARBLE sound, will not be to everyone’s taste and will begin to grate over what is a long album at 53 minutes. However, musically and synthetically, the content of ‘Fast Idol’ is intriguing and appeal despite not having the more immediate accessibility of say, NATION OF LANGUAGE.